At a meeting held earlier this month on October 16, 2014, the Commission of Fine Arts (CFA) reviewed design candidates provided by the United States Mint for the upcoming Tokyo Doolittle Raiders and American Fighter Aces Congressional Gold Medals. The CFA offered different recommendations compared to those offered by the Citizens Coinage Advisory Committee (CCAC) at a meeting held two days earlier.

Under Public Law 113-105, a Congressional Gold Medal was authorized to be awarded collectively to the American Fighter Aces in recognition of their heroic military service and defense of our country’s freedom throughout the history of aviation warfare. An American Fighter Ace is a fighter pilot who served honorably in a United States military service and destroyed five or more confirmed enemy aircraft in aerial combat during a war or conflict in which American armed forces participated. 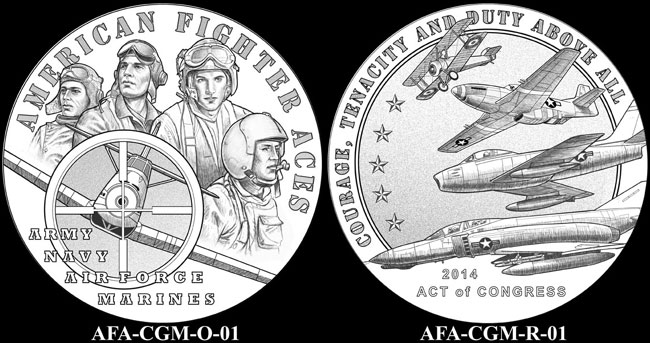 The Commission of Fine Arts noted the importance of including aircraft in the design and recommended obverse alternative #1 and reverse alternative #1. Obverse #1 shows representations of Ace pilots from each branch of the military above an image of a hostile aircraft in the crosshairs. The reverse includes images of aircraft flown during each conflict in which the Aces served with five stars representing the aerial combat victories required for Ace certification. In recommending the design pairing, CFA members commented that the designs include strong diagonal elements that would serve to unify the medal design. 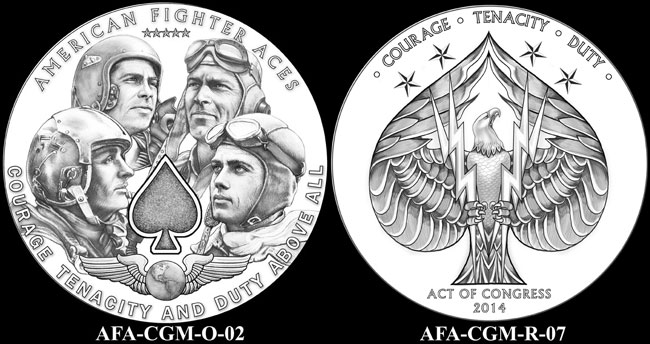 For the same medal, the Citizens Coinage Advisory Committee had recommended obverse alternative #2 and reverse alternative #7. Obverse #2 features Ace pilots from each branch of the military, five stars to represent the number of aerial combat victories needed for Ace qualification, a globe to symbolize the combat theatres, and a spade and military wings to represent the American Fighter Aces themselves. Reverse #7 features an eagle clutching thunderbolts with its wings forming the shape of a spade. Four stars are included to represent the four conflicts in which the Aces served.

Under Public Law 113-106, a Congressional Gold Medal was authorized to be awarded in honor of the World War II members of the 17th Bombardment Group (Medium) who became known as the “Doolittle Tokyo Raiders” in recognition of their military service during World War II. The Doolittle Raid was an air raid by the United States on the Japanese Home Islands, serving as retaliation for the Japanese attack on Pearl Harbor and demonstrating that Japan was vulnerable to American air attack. 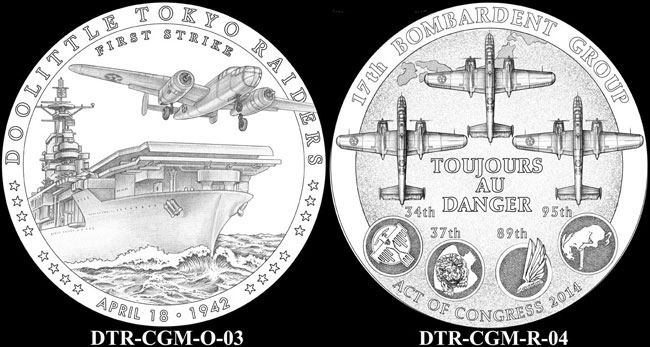 Noting the issues of historical inaccuracy with the alternatives recommended by the CCAC, the members of the CFA recommended obverse alternative #3 and reverse alternative #4. Obverse #3 depicts the North American B-25B Mitchell launching off the USS Hornet CV-8 on April 18, 1942. The 16 stars represent the 16 flight crews that made up the Doolittle Raiders. Reverse #4 depicts B-25B Mitchell aircraft along with patches representing the four squadrons (34th, 37th, 89th, and 95th) that make up the 17th Bombardment Group.

The recommendations offered by the CFA supported the preferences of the Mint’s liaison from the Doolittle Tokyo Raiders Association. 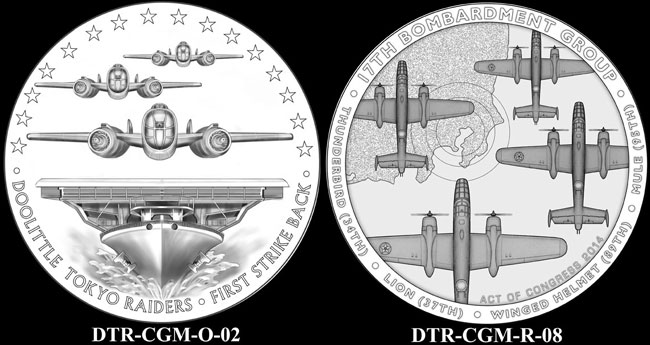 The CCAC had recommended obverse alternative #2 and reverse alternative #8. Obverse #2 shows a depiction of three North American B-25B Mitchell launching off the USS Hornet CV-8, but the Hornet’s superstructure is not present in the design. Reverse #8 shows a bird’s eye view of the 17th Bombardment Group as it reaches its mission. A graphic representation of the island, Honshu, is depicted below. Inscribed along the border are the four squadrons that make-up the 17th Bombardment Group.

The authority to select the final designs for both the American Fighter Aces and Tokyo Doolittle Raiders Congressional Gold Medals rests with the Secretary of the Treasury.