The Commission of Fine Arts recently reviewed design candidates for Congressional Gold Medals which will be issued to recognize four Native American tribes whose members served as code talkers during World War I or World War II.

In 2001, Navajo Code Talkers had been recognized with a Congressional Gold Medal for their contributions during World War II. Under the Code Talkers Recognition Act of 2008 (Public Law 110-420), there will be 22 additional tribes recognized.

The gold medals shall be accepted and maintained by the Smithsonian Institution, which is encouraged to create a standing exhibit for Native American code talkers or Native American veterans. Silver duplicate medals will be awarded to members (or their next of kin or other personal representative) of the recognized Native American tribes who served in the Armed Forces as a code talker during any foreign conflict in which the United States was involved during the 20th century. Bronze duplicate medals may be struck and sold to the public.

For the Comanche Nation, the CFA recommended obverse #2 and reverse #2. The obverse portrays the “spirit talker” behind the soldier talking on a radio and the reverse features the tribal logo of a horse and rider along with two military insignia. The CFA suggested that the two insignia should be reduced in size to fit within the circular border of the coin. They further suggested removing the circular outline of the rider’s shield since it would not be legible at the scale of the medal. 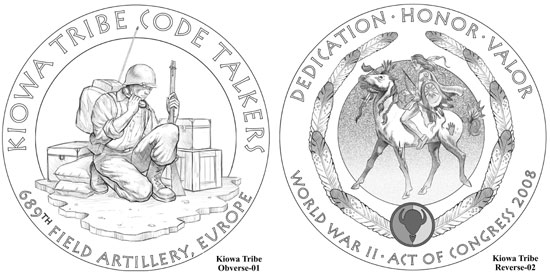 For the Kiowa tribe, the Commission recommended obverse #1 and reverse #2. The obverse depicts a World War II soldier talking on the radio, while the reverse features a warrior on horseback taken from the tribal seal. For the reverse, they suggested unifying the split background behind the buffalo head emblem. 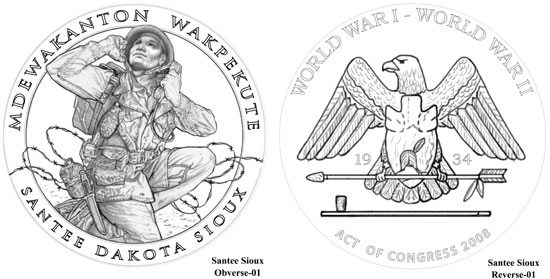 The CFA recommended obverse #1 and reverse #1 for the medal for the Santee Dakota Sioux tribe. The obverse shows a soldier holding a radio and looking skyward, and the reverse features a stylized eagle with a smoking pipe below.

For the Congressional Gold Medal honoring the Tlingit tribe, the CFA recommended obverse #1 and reverse #2. The obverse depicts a kneeling soldier with a radio in hand and circular lines to represent radio waves. The reverse depicts one of the tribes ceremonial Killer Whale hats with circular rings completing the design.

The Citizens Coinage Advisory Committee previously reviewed the design candidates for the four medals on April 26, 2012.