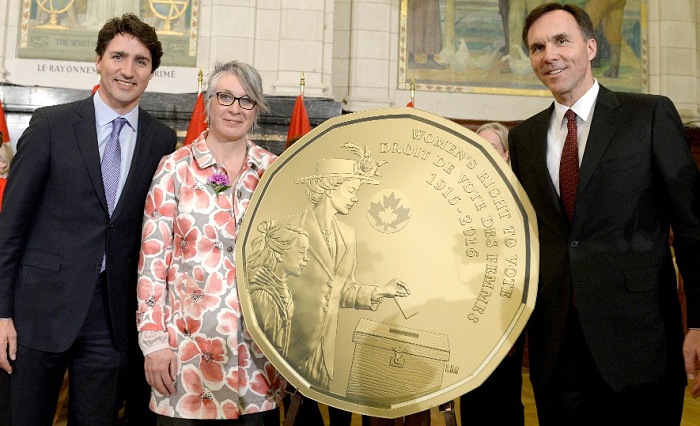 The Royal Canadian Mint unveiled a new commemorative reverse design for a circulation dollar coin which marks the centennial anniversary of the year women gained the right to vote in three Canadian provinces.

Provincial elections in Canada’s western provinces of Alberta, Manitoba, and Saskatchewan granted women the right to cast their vote for the first time in 1916; by 1918, Canadian women were able to participate in all levels of national balloting, though female citizens of Quebec were not accorded this provincial right until 1940.

Earning voting rights for women was a long battle. At the provincial level, public debate began in Ontario as early as 1876 among members of the Toronto Women’s Literary Club, a screen for suffrage activities. Prairie women, as they were known, gained provincial rights largely on their record of helping to settle and build the country.

On January 28, 1916, women living in Manitoba became the first in Canada to win the right to vote, as well as the right to hold provincial office. They were followed by Saskatchewan on March 14 and Alberta on April 19. British Columbia approved women’s suffrage on April 5, 1917. Ontario suffragists, after many years of struggle, celebrated their hard-won victory one week later on April 12. On May 24, 1918, all female citizens aged 21 and over became eligible to vote in federal elections, regardless of whether they had yet attained the provincial franchise. The first maritime province to extend the voting franchise to women was Nova Scotia on April 26, 1918, just before the nationwide edict was granted.

Canadian Prime Minister Justin Trudeau was in attendance for the coin’s launch at a ceremony held on Parliament Hill in Ottawa. Also participating was the Honourable Bill Morneau, Minister of Finance, and the Honourable Patty Hajdu, Minister of Status of Women. The launch was also coordinated appropriately on International Women’s Day. 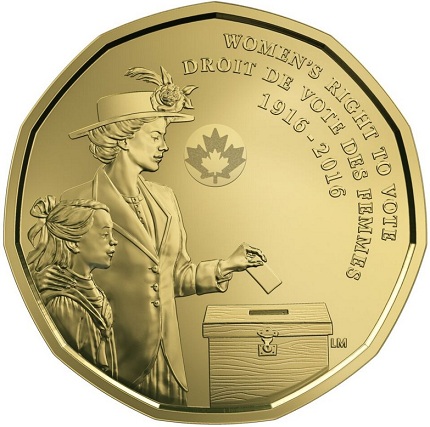 The reverse side of the coin is designed by Canadian artist Laurie McGaw and depicts a 1916-era image of woman and child, with the woman casting a ballot as the child looks on. The inscriptions WOMEN’S RIGHT TO VOTE, DROIT DE VOTE DES FEMMES, and 1916-2016 also appear in the top portion of the coin. The obverse features the present effigy of Her Majesty Queen Elizabeth II by Susanna Blunt, which has been used on most Canadian coinage since 2002.

A total of five million Women’s Right to Vote one-dollar circulation coins have been made available nationwide. As is befitting, the coin is produced at Royal Canadian Mint facilities in Winnipeg, Manitoba, the province where women first won the right to vote in 1916. The coin is available in packs of five for Canadian orders only. 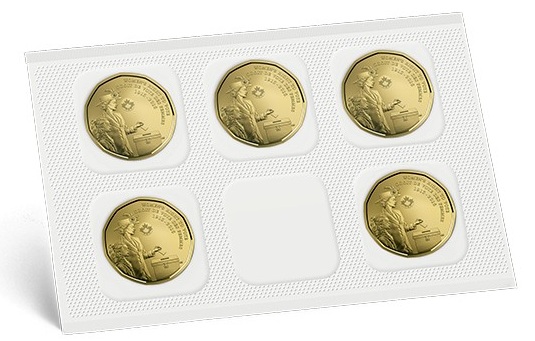 For more information on this and other coins offered by the Royal Canadian Mint, please visit their Web site. International orders dispatched where applicable.