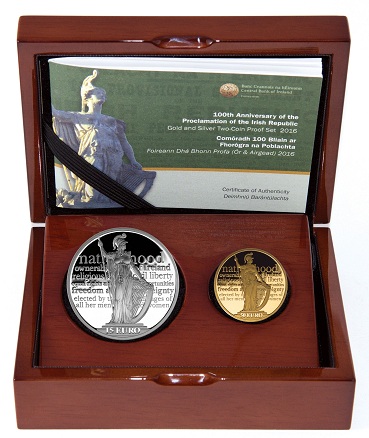 The Central Bank of Ireland has issued (4th April) their long-awaited centennial anniversary coins honoring the country’s 1916 Easter Rising event, which was a pivotal step toward the country’s eventual achievement of independence in 1922.

The Rising, which saw its primary leaders lose their lives in support of independence, began on April 24, 1916, Easter Monday. Political activist Padriag Pearse (1879 – 1916) stood on the steps of Dublin’s Central Post Office and read out a proclamation of Irish independence. The words resonated with those who heard him and eventually became the cornerstone of Irish statehood.

We declare the right of the people of Ireland to the ownership of Ireland, and to the unfettered control of Irish destinies, to be sovereign and indefeasible. The long usurpation of that right by a foreign people and government has not extinguished the right, nor can it ever be extinguished except by the destruction of the Irish people.

Soon after his heroic deed, Pearse was arrested and detained by British authorities along with fourteen other signatories of the Irish declaration of independence. He was taken to England where he was tried for treason and executed less than a month after reading those legendary words. He was honored by the Irish government in 1966 on the 50th anniversary of the event, when his likeness was included on a ten shilling silver coin. 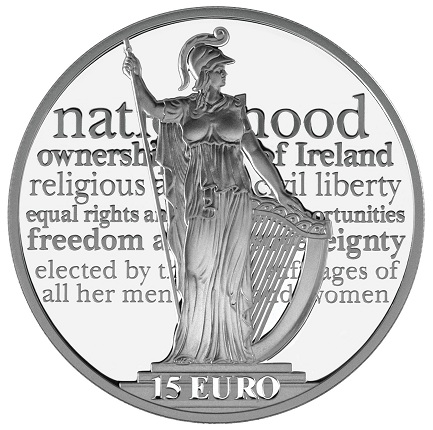 The coins, produced by BH Mayer Mint in Germany on behalf of the Central Bank, are issued in both gold and silver and designed by Michael Guilfoyle. The designs are identical on all three versions, with the exception of the inscribed denomination.

The obverse design includes the words read by Pearse in the background, along with a rendition of the allegorical figure of Hibernia, which stands atop the Central Post Office. The reverse of the coins includes Ireland’s insignia, the harp, which is centered along with the text EIRE and the year of issue on either side along the edge.

The coins are available in a variety of combinations of presentation. The silver coin is sold separately and as part of a two-coin set that also includes the €50 Proof coin. The gold coins are available separately. For more information on these and other coins offered by the Central Bank of Ireland, please visit their Web site. International orders will be dispatched where applicable.