Despite an increase in net income and seigniorage for 2011, the US Mint transferred $51 million to the Treasury General Fund, sharply lower than the $388 transferred in the prior year. Additional cash was held in reserve due to uncertainties in future cash flow from circulating coin operations. These uncertainties stem from the continuing losses generated by the production of the cent and nickel and an anticipated reduction in seigniorage following the suspension of production of Presidential Dollars. The United States Mint operates under the Public Enterprise Fund without an appropriation. Revenue is generated from the sale of numismatic products to the public, bullion coins to authorized purchasers, and circulating coinage to Federal Reserve Banks. During the fiscal year ending September 30, 2011, overall revenue grew by 27.87% to $4.97 billion, while seigniorage and net income increased by 30.06% to $527.8 million.

Even though the bullion and numismatic categories achieved record results, the largest contributor to the bottom line was the production of circulating coinage. The US Mint manufactures circulating coins and issues them to Federal Reserve Banks at face value. Seigniorage is generated from the difference between the cost to manufacture and distribute the coins and their face value.

The seigniorage generated across all circulating coin denominations was $348.8 million for the 2011 fiscal year. Breaking down this number down by denomination reveals the source of the uncertainty about the US Mint’s future cash flows.

During the 2011 fiscal year, losses from producing and distributing the cent and nickel reached $116.7 million, as the unit cost for each rose to more than twice the face value. The US Mint’s Acting Chief Financial Officer David Motl indicated that demand from Federal Reserve Banks for these two denominations is expected to increase in the near future.

Meanwhile, the US Mint’s most profitable denomination was the $1 coin, which generated $382.8 million in seigniorage. On December 13, 2011, Vice President Biden and Treasury Secretary Geithner announced the suspension of production of Presidential Dollars for circulation. The coins will still be minted in limited quantities needed to fulfill demand from collectors, but undoubtedly production will experience a sharp decline. 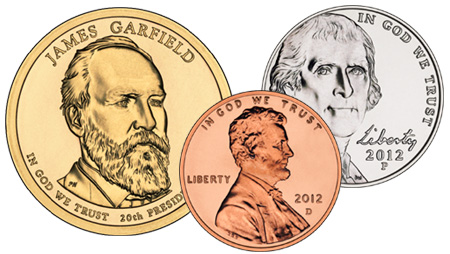 From a financial standpoint, the US Mint will be forced to increase production of their two most unprofitable products, while sharply reducing production for their most profitable product. These two factors will set up for a very challenging 2012 fiscal year.

The US Mint does see some hope for a resolution on the horizon. Under the Coin Modernization, Oversight, and Continuity Act of 2010, the US Mint is due to deliver a report to Congress in December 2012 with findings and recommendations following research and development of new metals formulations for circulating coins. Deputy Director Richard A. Peterson stated, “we are clearly focused on delivering to Congress a thorough, well-researched report that provides a prudent framework for future legislation to modernize our nation’s circulation coins.”