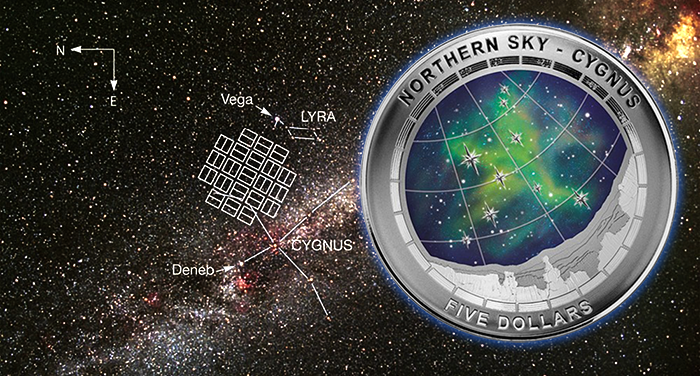 On December 5, the Royal Australian Mint released the eagerly anticipated third and final coin of its extremely popular Northern Sky series of domed and colored coins depicting star constellations. That same day the mint marked the coin “temporarily unavailable,” and then the following day, declared it “sold out.”

The new coin is called “Cygnus,” which is a northern sky constellation that lies on the plane of the Milky Way and gets its name from the Latinized Greek word for “swan.” It is one of the most visible constellations of the Northern Hemisphere, and is visible from June to December each year.

The celestial swan Cygnus is best known for its Northern Cross, and is the 16th largest of the 88 modern constellations. It was discovered by the second-century astronomer Ptolemy. 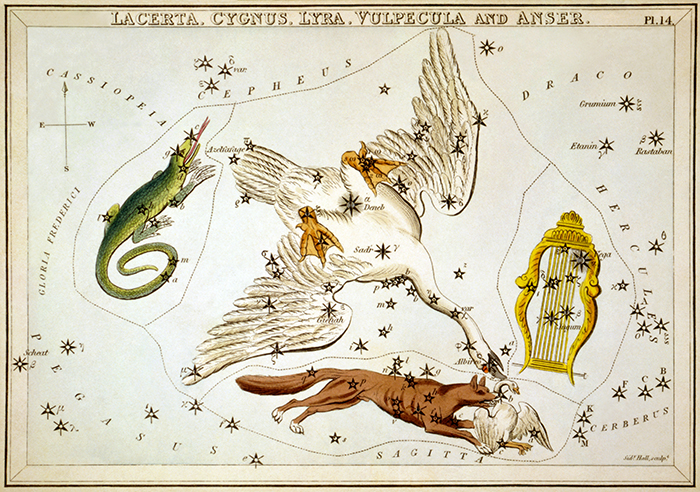 Cygnus as depicted in “Urania’s Mirror,” a set of constellation cards published in London c.1825. Surrounding Cygnus are Lacerta, Vulpecula and Lyra. (Library of Congress image)

According to Greek mythology, Zeus disguised himself as a swan to capture the attention of Leda, whose children were immortalized in the sky as swans.

The concave reverse of the 2016-dated $5 Cygnus coin, designed by artist B. King, features a stunning depiction in which the stars, aligned to form the Northern Cross, are set against a vibrant blue-and-green background. At the base of the field is a suggestion of rocky terrain. The effect is as if one is standing in the desert looking up into the dome of the night sky. 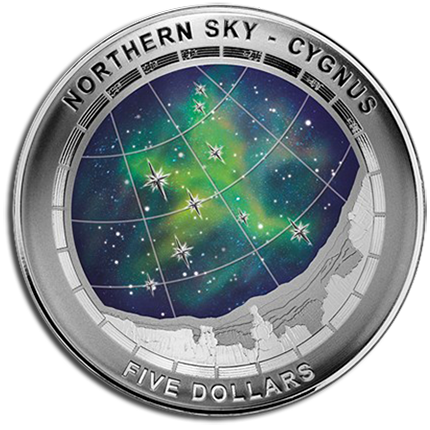 The convex obverse features the Ian Rank-Broadley effigy of Queen Elizabeth II that appears on all Australian coins. 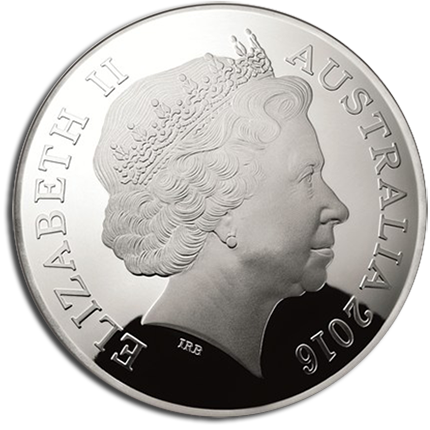 Each coin is struck in Proof format, made from one ounce of .999 silver, and comes in an elegant presentation box with an official certificate of authenticity.

Cygnus follows the previous two issues in the Northern Sky series, which depicted the Cassiopeia and Ursa Major constellations. Those coins were issued respectively at the end of 2015 (though dated 2016) and in the spring of this year. Both of those coins were quick sellers too, though they sold out over a period of weeks (Cassiopeia) or months (Ursa Major) rather than in about a day.

These coins followed the mint’s first foray into coins of this type: the Southern Sky trio of coins, which included the Crux coin in 2012, Pavo in 2013, and Orion in 2014.

Unlike the three Northern Sky coins, each of which has a mintage of 5,000, the coins of the first series had mintages of 10,000 each.

The Southern Sky Crux coin was the world’s first curved (i.e., concave on one side and convex on the other) coin with added color. For that reason and because it was the first coin of the series, that coin has emerged as one of the best-performing modern world coins ever. 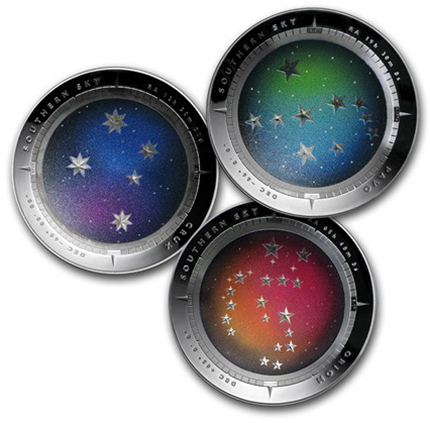 That coin also helped inspire officials at the U.S. Mint to create the 2014 Baseball Hall of Fame curved coins, and were reproduced by the Mint to help figure out how to strike the baseball coins.

The Southern Sky coins were in turn inspired by the very first curved world coins, the 2009 French silver and gold pieces that were issued for the International Year of Astronomy and the 40th anniversary of the Apollo 11 moon landing, which have also seen strong secondary-market performance.

Each of the six coins that form the two related Australian series were launched at an issue price of approximately $90, depending on the exchange rate at the time between the U.S. and Australian dollars.

As for Pavo and Orion, the first brings about $200, or $300 in Proof 70, while Orion has been the laggard in terms of price performance, bringing only issue price unless in Proof 70, which sells for a little more.

The Northern Sky coins have done much better than Pavo and Orion, though so far not as well as the Crux coin.

Cassiopeia is so far the best price performer of the second series, bringing about $200 on average (with Proof 70’s selling for at least $400, probably because it is the first coin of that series and because it sold out more quickly than Ursa Major).

The instant sell-out of Cygnus is a first for both series. Such a quick sell-out is very rarely seen with any modern commemorative coin and bodes well for its future performance.

The coin is distributed through a combination of direct sales by the mint as well as sales through the mint’s authorized distributors, which in this case include exclusive arrangements for the U.S. with APMEX and with German dealer EMK for European sales. The Coin Shoppe in Canada is also currently accepting orders for their allocation, which is expected to arrive around Dec. 19. (Editor’s note: As of this posting, APMEX does have both the individual Cygnus coin and the three-coin Northern Sky set in stock.) 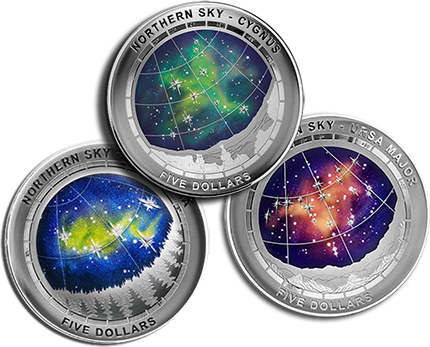 The Northern Sky series: clockwise from the top, Cygnus, Ursa Major, and Cassiopeia.

By law, 10% (or 500) coins must be reserved for sale to Australian buyers, and the remaining 4,500 coins are sold around the world through these major channels plus a few other dealers.

Italian dealer Powercoin sold out within about two days (as of Dec. 11, however, they do have more coins in stock), and Australian dealer Direct Coins sold out on the first day. Modern Coin Mart (www.moderncoinmart.com) is also selling the Cygnus coin both ungraded and graded Proof 70 and 69 by NGC. Dealers that would normally sell these coins, such as Downies, did not even get any of them, at least so far.

The instant sell-out appears to be a result of the global popularity of these very well-designed and attractive coins that make great use of the domed shape, and the fact that many people by now know how well these coins do compared to most world coins at a similar price point, which likely results in buyers acquiring extra examples to sell.

A certain amount of speculative interest helps boost a coin’s price, but that is only sustained if there is genuine collector interest in the coin.

I would anticipate considerable volatility in prices until the major dealers sell out of their inventory, and at that point I see prices in excess of $200 going forward.

Given the widespread interest among modern coin collectors in coins with space and astronomy themes as well as in curved coins, the Northern Sky coins should remain popular for years to come.

And given how successful they have been for the Royal Australian Mint, don’t be surprised if the concept is extended to depict other constellations in the future either on more coins from this mint, or coins from other mints.  ❑

This post was updated on December 20, 2016, to add Modern Coin Mart (www.moderncoinmart.com) to the list of vendors carrying the coin.