The Dutch Ministry of Finance has announced (8th October) that a new two Euro coin will be issued on the 25th November which celebrates the country’s 200th anniversary of both independence and the formation of the kingdom of the Netherlands.

The modern Dutch kingdom was on its way to formal recognition in 1813 when Prince Willem of Orange (1772 – 1843) landed at Scheveningen beach on 30 November – only a few yards from the place where he had left the country with his father – going into exile some years earlier. Before that date, The provinces of the Netherlands had been annexed by the French Empire and Napoleon. After the fall of Napoleon, city after city was being evacuated by defeated French occupation troops. The Dutch population, pleased with the departure of the French who had ruined the Dutch economy, enthusiastically welcomed the prince. On the 6th of December, the provisional government offered Prince Willem the title of King which he refused, and instead he proclaimed himself “sovereign prince”. Prince Willem also championed the rights of the people to be governed by a constitution.

In August 1814, the Prince was appointed Governor-General of the former Austrian Netherlands (present-day Belgium) by the Allied Powers who occupied that country. He was also created Grand Duke of Luxembourg, a territory having been received as compensation for trading his hereditary German lands to the King of Prussia and the Duke of Nassau. William thus fulfilled his family’s three-centuries-long dream of uniting all the Low Countries under one kingdom. The dreamed of unity did not last long however as the newly created united Kingdom of the Netherlands was dissolved after only 15 years when the former Austrian Netherlands separated and became the Kingdom of Belgium in its own right under Prince Leopold of Saxe-Coburg & Gotha, he was proclaimed King Leopold I of Belgium in 1830. Willem I abdicated as king of the Netherlands in 1840 in favor of his eldest son who was invested as King Willem II. Eventually, the Grand Duchy of Luxembourg was recognized as a sovereign country in 1890 upon the death of King Willem III. Since the formation of the Dutch Kingdom, there have been seven monarchs in total, the current king’s great-grandmother Queen Wilhelmina was the country’s longest reigning head of state, having served 58 years in total from 1890 until her abdication in 1948 in favor of her only child, Juliana. 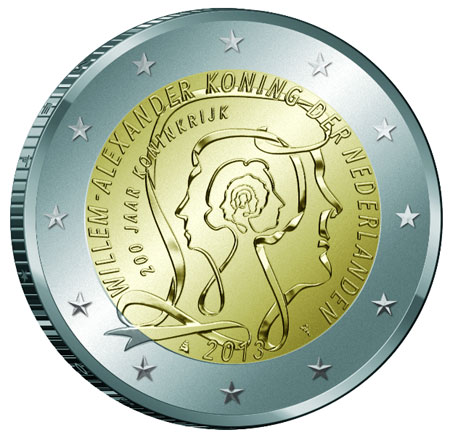 The coin, designed by Roosje Klap and Claudia Linders is struck by the Royal Dutch Mint and is the first colorized coin for the Netherlands. It includes an innovative design, incorporating the outlines profiles of each Dutch monarch since 1815 – (King Willem I, Willem II, Willem III, the Queens Wilhelmina, Juliana & Beatrix and King Willem-Alexander) their linear portraits intertwined & connected one within the other as the single ribbon itself creates the seven profiles – symbolic of the continuity of both the royal generations and the many provinces united into one country. The text around the central design reads: “Willem-Alexander Koning der Nederlanden” and “200 jaar Koninkrijk” (200 years Kingdom of the Netherlands). 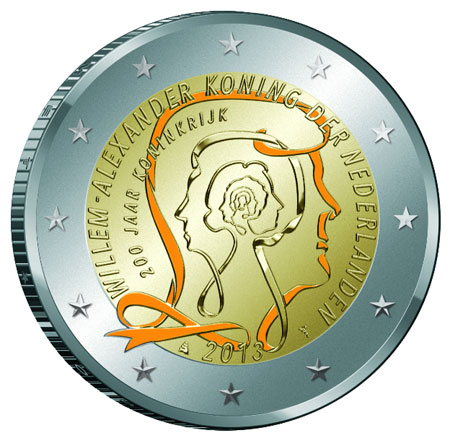 On the colorized version – the last outline created by the ribbon which is of the newly created King Willem-Alexander appears as orange, that of the dynastic name of the royal family who has reigned over the Dutch Kingdom for these two centuries.

The reverse of the coin is that of the standard and current design for circulation €URO coinage. The new coin, produced in three versions, colorized proof, ordinary proof and BU quality, are sold as a three-coin set, the colorized coin is only available in this set. The proof and BU coins are available separately.

For more information on this and other coins offered by the Royal Dutch Mint, please visit their website at: http://www.knm.nl/ Information is offered in Dutch – European destination orders only.