A British Treasury note printed after the Second World War was sold today for a satisfying £56,000 (US$87,360) to one astute buyer. The extraordinary note, with an estimated price of £40,000 was auctioned by Dix Noonan and Webb in London as lot number 4036 in their banknote sale. The auction coincides with the annual IBNS banknote show being held from the 30th September to the 1st October in Central London. 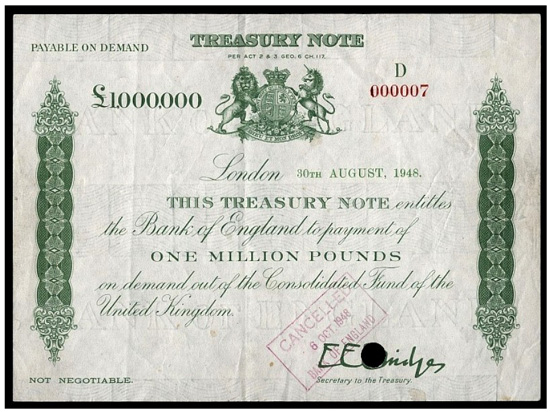 The uni-faced note, which is believed to be one of only two in existence, is dated the 30th AUGUST 1948 with the serial number D 000007 and the signature of E E Bridges, then Secretary to the Treasury. The note was printed by the Bank of England printing works on their own standard white watermarked paper using green ink instead of the usual black print. The note was stamped “CANCELLED” on the 6th October 1948, which also included a hole punch over the signature. The note was graded as fine – extremely fine and categorised as extremely rare.

The One Million Pound note denomination, (worth more than US$4,000,000 when it was printed) is one of just a small quantity of high denominations printed for internal use, issued by the Treasury, and transferred to the Bank of England. The funds which these notes represented were part of the Marshall Aid plan initiated by the United States to assist with rebuilding the economies of war torn countries after the end of World War II in Europe, and as such, these funds were subject to strict accountability. The Treasury had borrowed funds from the Bank of England on a short term basis and to help with the book keeping, requested the printing of high value notes. The total order sent to The Bank of England’s printing works was Three Hundred Million Pounds in varying denominations, the smallest denominations being Twenty Five Thousand Pounds. It is believed that the entire issue was subsequently destroyed with the exception of numbers D 000007 and D 000008, each for One Million Pounds, which were presented to both the British and American Treasury Secretaries respectively after cancellation.