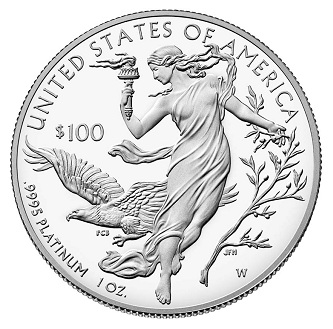 The Citizens Coinage Advisory Committee (CCAC) has announced that it will hold a meeting at 10 a.m. ET on Friday, September 16. The agenda for the meeting states that the committee will consider design candidates for American Eagle platinum Proof coins to be released in 2018, 2019, and 2020. Platinum Proof Eagles issued during those years will carry designs representing the theme of “Life, Liberty, and the Pursuit of Happiness.”

The Committee will also elect jurors for the Mint’s ongoing Breast Cancer Awareness Commemorative Coin Design Competition, which will give a member of the public the chance to create the shared obverse and reverse designs for the three coins set for release in 2018 as part of this program. Also planned for that day is a discussion of the Mint’s 2015 and 2016 annual reports.

The meeting will be held at: Conference Room A, United States Mint, 801 9th Street NW., Washington, DC 20220. Those interested in attending can call the CCAC hotline at (202) 354-7502 to receive updates in the event that adjustments are made to the meeting time or room location.

The Citizens Coinage Advisory Committee was created in 2003 to advise the U.S. Treasury Secretary on themes, designs, mintages, and proposals regarding our nation’s coins, medals, and commemorative issues. Four spots on the 11-person committee are reserved for candidates nominated by members of Congress, while the remaining seven seats are filled by one individual with knowledge in American history, one with expertise in numismatics, one with experience in numismatic curation, one with knowledge in medallic arts or sculpture, and three who are deemed qualified to represent the interests of the general public.