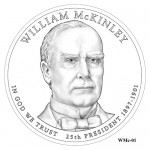 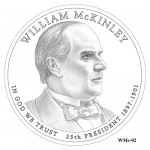 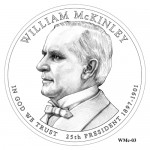 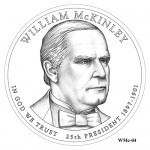 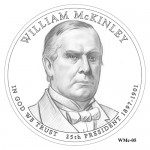 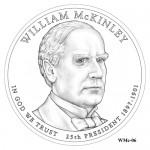 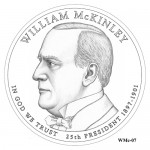 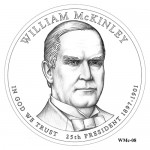 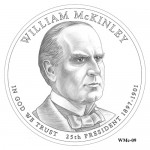 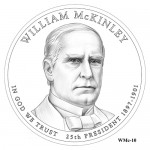 The first set of designs were for President McKinley. As the committee has done previously, a hand vote was taken to see which of the 10 provided designs were of sufficient interest by one or more members to discuss; as a result, only designs 1,2,3,5,9,10 were open for discussion.

Heidi Wastweet was asked to start the discussion for each set, as her trained eye as a sculptor provides the other committee members with a professional viewpoint from the aspect of going from design to actual coin. She found design 1 to be “a little flat”, but had no big objections. Design 2 was “too heavy in the jowl area,” adding that it would not be easy to sculpt. Design 3 was one of her favorite, liking the “near profile image”, and she called design 5 “a nice drawing”, but found a few things that would be “a little confusing” as a sculptor. Design 9 “would not work well”; the fine details in the forehead and jowls would not read well in three dimensions. Design 10 “would be a fine sculpture.”

Michael Olson indicated his comments would not be as detailed as those of Ms. Wastweet, then stated his preference for the forward-facing designs of 5 and 10.

Mike Ross stated that President McKinley was seen as a “forward-thinking visionary committed to open markets” as well as “projecting democracy abroad” through the acquisition or annexation of Hawaii, Guam, and Puerto Rico, as well as military bases in the Philippines and Guantanamo Bay in Cuba. In his opinion, designs 2, 5, 9, and 10 have that visionary look, and although design 6 is not open for discussion, he joked that he liked that design because it looks like he recognized his assassin enter the room.

Donald Scarinci indicated he agreed with “two Mikes,” but made the point that as they consider profile versus three-quarter versus front-facing design, these coins are “not in isolation”: they will be always be collected as a series of coins, or in sub-sets of coins. Being mindful of this fact, he said, “I think we should be consistent with what we have done in the past.” President McKinley is, “for all intent and purposes”, the first twentieth-century President, so his coin should “capture the spirit” of President McKinley. With a handful of designs that have these qualities, he indicated he “could go” with design 10.

Dr Doreen Bolger was next, and said she liked design 10 as it had “a look of personality or conviction”, as well as it having more of a three-dimensional look.

Dr Michael Bugeja followed Dr. Bolger. He found design 1 to be “technically accurate” and considered it “acceptable but not necessarily inspiring.” Design 2, showing more of President McKinley’s clothes, has his bowtie as perhaps a too prominent a feature. The third design has the proper dimensions for the bowtie, but cautions his fellow members that bowties “look a lot like E Pluribus Unum ribbons.” That said, design 3 was his favorite of the profiles as “everything is dimensionally accurate.” In design 5, he saw “dimensional weakness” in the mid-to-lower nose area on the right-hand side of the face, as well as in the right eye in design 9. He liked design 10, but “wished the bowtie was smaller.”

Erik Jansen thought the eyes in design 1 “look a little hollow” and the drawing did not appear to be an accurate likeness. Design 2 seems to depict President McKinley as overweight, but liked the balance between the profile and the shoulder/neck area. The third design was “his favorite side portrait,” perhaps his favorite design overall, but the darkness of the brows “may end up being a challenge,” and the concave cheeks would work against McKinley’s “square head and a square face.” He liked the way design 5 “coined up,” perhaps as it is a “soft drawing” . Design 9 had “some funny shadows,” and was worried that it may “wind up with some spaghetti hair.” Design 10 was his favorite forward design, after determining that a strange line in the images in his packet was a copier aberration and not in the actual design.

Chairman Gary Marks was next, commenting that the eyes in design 1 had a “startling look” or looked “a little dazed,” and was not fond of that design. With design 2, Mr. Marks echoed a comment from Ms. Wastweet about the jowls, and also noted his inability to “warm up” to a profile image of McKinley, having not seen the presidents rendered in that way. Design 3 has the same issue with the profile view, as well as it losing the effect that his clothing has on setting the proper time period. Design 5 had another “blank stare,” and with the position of the mouth gave the chairman the impression that the President was bored and “starting to get a little annoyed.” The jowl in design 9 bothered him as well, as well as the general shape of the head. He “really liked” design 10: the eyes had a “good, firm, confident look,” the period clothing is good, and echoed Dr. Bolger’s earlier comment regarding the three-dimensionality of the image; he said he would be giving this design “significant support.”

Arthur Houghton was the last to comment, who started off with a reference to his own preference to wearing bow ties. He said the elements he was looking for in these designs were “firmness, gravitas, a directness of design”. He found design 1 to be “insipid”, whereas design 10 portrayed “a strong jaw,” but the overall design looked flat. On design 5, he said, “that is the man in the painting.”

It is worth noting that eight of the nine committee members gave design 10 the full 3 points possible. Design 10 was the committee’s recommendation for the William McKinley Presidential Dollar, differing from the CFA’s recommendation of design 3. 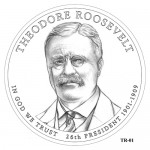 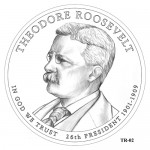 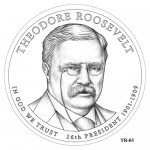 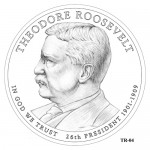 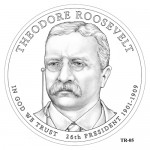 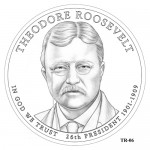 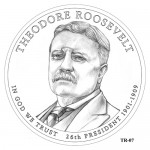 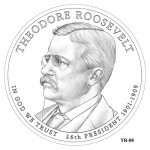 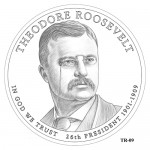 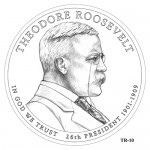 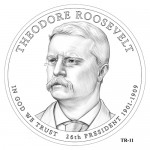 Next were the designs for President Theodore Roosevelt. Once again, a hand vote was taken to reduce the designs the committee would discuss, and designs 1, 4, 5, 6, 8, 9, 10, and 11 were chosen.

Ms. Wastweet started the discussion, and declared it to be the “most difficult group” for her. She thought that the first design looked like “he is outdoors in the sun,” but she was “not a fan” of design 4, and was surprised by the CFA recommendation of that design. Designs 5, 6, and 8 were also not liked by the sculptor, noting the “soggy” appearance of the mustache, a hairstyle that reminded her of Adolph Hitler, and the strangeness of the hair, respectively. She found design 9 to have perspective problems, and thought the mustache looked like “an anemone.” The eleventh design made the former Rough Rider look “dandy” and not rugged at all.

Arthur Houghton was next, and noted that President Roosevelt was a “man of contradictions,” a hunter who was also a conservationist, a maker of war as well as of peace. Opposing Ms. Wastweet’s opinion on design 1, he said that image was “not the Roosevelt that he knows of,” appearing to be “an introverted figure.” Design 5 was “unmistakable as Teddy Roosevelt”, but did not have “the sense of vitality” that he sounded like he was looking for, “but then again, none of the others do either.”

Chairman Marks was third, and comically kept saying “Ted Kennedy” when he meant “Theodore Roosevelt.” He liked design 1, noting that the eyes relay the “mischievous character of the man”; in contrast, the spectacles in design 4 were minimized and not proportional, “sitting on the nose … in a way that they wouldn’t.” He also opined that a profile picture of Roosevelt “loses a lot of the sense of the man.” The fifth design, in his opinion, “did not look like Theodore Roosevelt.” Design 6 “looks a little dandy”, as did design 11. He thought design 8 was the best profile, but he was not a fan. Of design 9, he found that “the jowl and neck, how they don’t work with each other,” and in design 10, the image was a more professorial look, not striking the enthusiastic image that he has of Theodore Roosevelt.

Erik Jansen was next, and found design 1 to be “bold” and “enthusiastic.” He asked his fellow committee members “not to over-think this.” He felt that the shoulder line in design 4 looked wrong, and that design 5 depicted a “stern, but not a fun human being.” He said the eyes in design 6 were wrong, and advocated for a profile view as shown in design 8. Similar to the chairman before him, he said that design 10 make the former president look “like a Nobel laureate.”

Dr. Michael Bugeja was next, noting problems with the glasses in design 4 and in the glasses strap in designs 8 and 9. He felt that Roosevelt “looked sleepy” in design 6, and thought that design 10 had “dimensional weakness.”

Dr. Doreen Bolger was very quick in her comments, simply stating that she felt that design 1 showed “the most character.”

Donald Scarinci was slightly more outspoken that Dr. Bolger, commenting that design 1 was the “only one to go with,” and that design 4 was the image “we are all used to seeing.”

Mike Ross said in his comments that Theodore Roosevelt was “the one president of all you cannot have be flat”, that his dollar coin had to “have something with life to it.” He lend his support for design 1.

Michael Olson agreed with the prior comments, feeling that design 1 was “the best with what we have to work with,” and was “the only choice for me.”