The following are the committee members’ comments for each design candidate discussed: 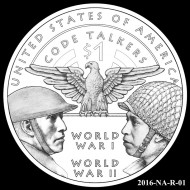 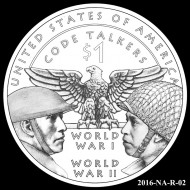 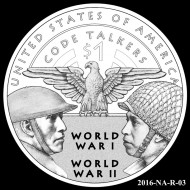 Dr. Bugeja liked the balance in these three designs. Ms. Wastweet was “a little attracted” to the three designs, thinking they could be revisited in the future for Code Talker Congressional Gold Medals. Mr. Olson described this set of designs to be a “good default design.” 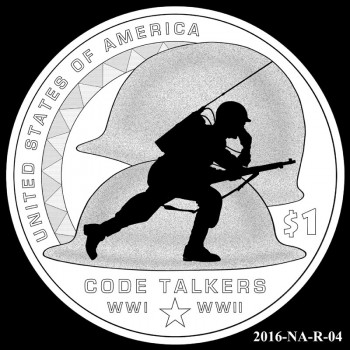 Ms. Stevens-Sollman was unsure the helmets “do enough for her” in their symbolism. Chairman Marks reminded the rest of the committee of the Wyoming State Quarter design, with its bucking bronc; he had heard lots of generally negative comments from that design, and cautioned the others about subjecting them up for criticism if it was selected. Mr. Jansen liked this design, showing the Code Talker “in active engagement.” Ms. Wastweet found this design “unattractive,” and said the helmets resembled blobs; the design did not appeal to her. Mr. Olson agreed with Ms. Wastweet’s blob comment, and indicated he “was not a big fan” of this design, and expressed his belief that, in actual size, most people would be unable to distinguish between the two helmets 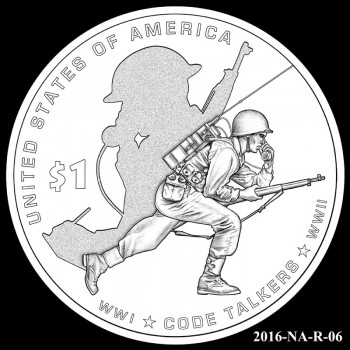 Dr. Begeja liked this design, noting the optical line of sight between the hand in the WWI Code Talker and the antenna from the WWII Code Talker’s backpack; he called it an “enduring and endearing image.” Ms. Stevens-Sollman called out the “simplicity of design,” noting the inclusion of the communications equipment solidifies this design as representing Code Talkers. Chairman Marks reminded the other members to view the true-size image of the design, concerned that the silhouette might not translate in the business-strike dollars; he suggested removing the WWI image, leaving only the WWII soldier with his radio and rifle: a “powerful image that is readily discernable.” Mr. Jansen was confused by the shadow image on this design, stating that “it would steal your eye control, without returning much meaning.” Ms. Wastweet called out that Code Talkers did not work alone: “they had to have someone on the other side of the phone to talk to”; she said the inclusion of the Code Talkers from the different wars provides that element, calling it “clever.” Mr. Olson said this design was “his personal favorite”, and thought it was “neat” that the WWI soldier was in shadow, communicating with the WWII soldier. Mr. Uram commented that the WWII soldier in this design by itself “would be super” with its sense of motion; he concluded with the design being “worthy of some votes.” 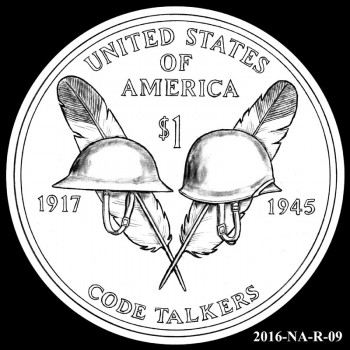 Mr. Hoge found this design to be his favorite, calling out its “strong elements”, but did express a desire to change the dates to “WWI” and “WWII”. Dr. Bugeja liked the minimalism of this design, but commented that he would like to see the faces of our Code Talkers. Ms. Stevens-Sollman was also unconvinced that the helmets by themselves indicate this as a Code Talker design, but did note the feathers in a “V” for victory. Mr. Jansen said this design caught his eye in its distinctness from the rest. He said it was “clearly done by an artist of the hand, as opposed to an artist of Photoshop,” and “it shows in its character,” and has a feel that is was designed in the WWII era. Ms. Wastweet was drawn to this design, “simple and perfect for the size of the coin”, as well as being very different from the Code Talker Congressional Gold Medals; she also noted her agreement with Mr. Hoge’s suggestion of substituting “WWI” and “WWII” for the dates. Mr. Olson said this was “a fine design”, but thought design 6 was better; he also found the dates confusing. Mr. Uram indicated he would be giving full support to this design, noting that it is set apart from the other designs the committee have already approved. He liked the symbolism of the feathers, especially that they are not “bound together”, and also noted the similarity to the 1943-1945 Canadian victory nickels. 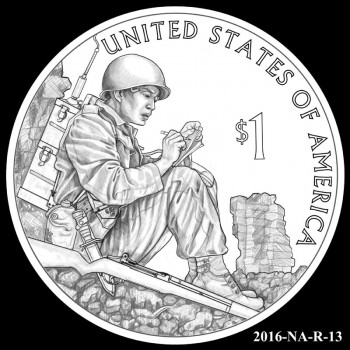 Chairman Marks liked the use of devices and negative space in this design, calling it “simple, but bold and well-executed”. Mr. Jansen called this design a “picture on metal”, and not sure he liked the appearance of the soldier and the rifle at the incline. Ms. Wastweet said this design could be brought back for use in the Code Talker Congressional Gold Medal program, as it is more like the designs in that series. Mr. Olson provided his military perspective (he serves in the Iowa Army National Guard as a Lieutenant Colonel) that the soldier in this design “has got everything he needs,” and agrees that “it would make a better medal than a coin.” 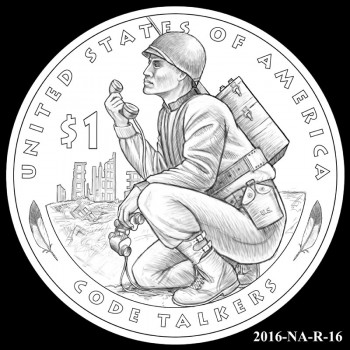 Mr. Jansen liked the layout in this design, as well as design 17; he said he would give them some support, but not as strong as the others he had commented on. He also commended the artists for providing quality Code Talker designs after they had already produced so many design for the Congressional Gold Medals during the last few years. Ms. Wastweet said she was not attracted to this design, calling the anatomy “simplistic.” Mr. Olson did not have a lot of interest, and thought he looked similar to a soldier on a previous design. 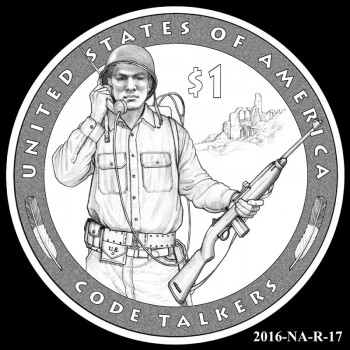 Dr. Bugeja found this design to be his favorite, calling it “powerful design” with the soldier “coming forward out of this coin”. Mr. Olson was attracted to the feathers in the border of this design, but on the dollar coin he thought they would not make much of a difference. He also noted that this design’s font was used in almost all of the previous Native American dollar coins, with the exception of 2013.

The design in bold will receive the committee’s recommendation.