During a meeting held on March 10th, 2014 at the U.S. Mint’s headquarters in Washington, D.C., the Citizens Coinage Advisory Committee reviewed and discussed the reverse designs for the 2015 Native American Dollar. 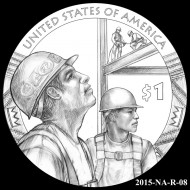 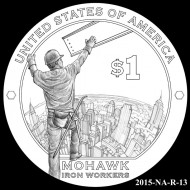 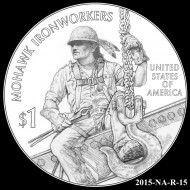 There were technical questions from some members of the committee. Heidi Wastweet asked if the lack of visible rims on designs 8, 12, and 13 was an error, as the designs seems to extend to the edge of the coins; Steve Antonucci from the Mint replied that it was a formatting error. Dr. Michael Bugeja asked if the Mint foresaw adding incuse features to the building elements in designs 3 and 4; Don Everhart from the Mint indicated that he liked the idea. Additionally, Dr. Bugeja was concerned that the method of frosting on designs 14 and 15 ran the risk of losing details in the proof coins. Ms. Wastweet added that the cast shadows depicted in the drawings were misleading, and would not be rendered in the actual coin; the I-beam could be cast as smooth, allowing the legs to be highlighted in the proofs. Erik Jansen asked why there were some designs with “IRON WORKERS” as two words and others had “IRONWORKERS” as a single word; Megan Sullivan replied that it should be one word. Additionally, he was concerned that the focus would be taken away from the dollar being a Native American design and instead become an “ironworkers coin”, as well as appreciating the perspective depicted in the designs. Chairman Marks asked how design 7 would be rendered in proof, possibly with the crossing road, the border, and $1 elements polished; Mr. Antonucci indicated that the beam would be heavily frosted, and the worker and buildings would be lightly frosted. Jeanne Stevens-Sollman concluded in asking if the worker in design 7 would be polished, and was informed he would be frosted.

The following are the committee members’ comments for each design candidate discussed. 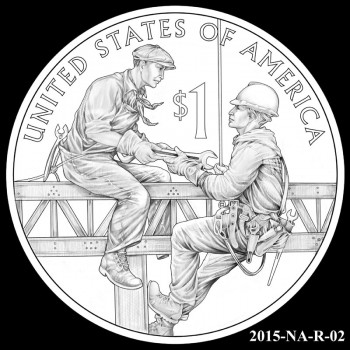 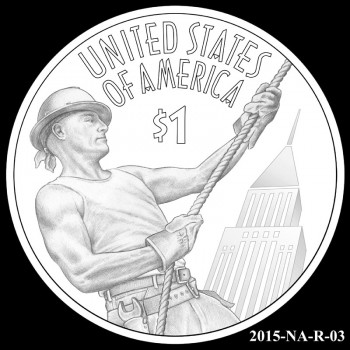 Mr. Uram said that while he liked the motion that the design conveys, he believed it would more closely resemble a “bungee jumper” rather than a Mohawk Ironworker. Mr. Olson liked the design, despite the lack of Mohawk Ironworkers. Ms. Wastweet called this “a very attractive design,” and noted that often the committee members make comments that extra text and lettering “clutters up” design, but in this series the additional lettering is helpful. Chairman Marks found this design “clean and nicely executed,” but again did not see anything to convey Mohawk Ironworkers. 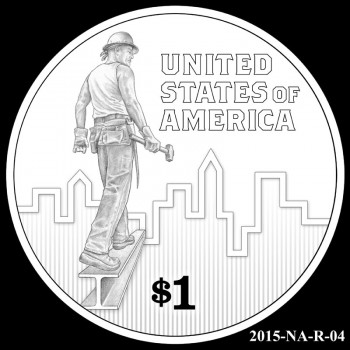 Mr. Olson commended the artist for this design, calling out the lettering as looking “somewhat industrial.” Ms. Wastweet said this design’s texture “would look fantastic” on the coin, calling it “simple, but yet detailed and it’s effective.” Chairman Marks looked for the Native American element, and did not find that in this design, as well as noting his preference to see the fronts of people versus their backs. Dr. Bugeja said this was one of his favorites, and thought that incusing the skyline would create depth and make the coin “literally amazing.” He suggested moving the “United States of America” legend to the rim and adding Mohawk Ironworkers in its location. Mr. Jansen’s reaction to this design: “Oh, Yeah,” noting its texture, simplicity, and perspective, and planned to give it his strong support. Ms. Stevens-Sollman was convinced that the I-beam was supported by the structure in the background, and “liked it very much,” and made some suggestions to add Mohawk Ironworkers. She said she was reminded that these workers helped build the World Trade Center buildings, and after the 9/11 attack, they returned “to help find what they could find through all that rubble.” 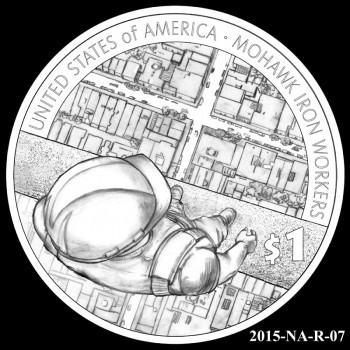 Mr. Uram liked this design, but compared it to the 2013 American Platinum Eagle as being so frosted that it changed his perception of the coin. Mr. Olson indicated this was his favorite design: if it were on a 3-inch medal, he said “you would probably get a little dizzy.” However, he called out that if the design was intended as a literal interpretation, he couldn’t see how the beam could extend over the buildings below; he suggested changing some of the buildings to rubble or something reminiscent of a building site. Ms. Wastweet noted the creativity of this design: “I would love this if it were a medal,” but doesn’t think it work well as a dollar coin. Chairman Marks “really liked” this design, but thought there was “too much going on for the size of the palette,” and continued the feeling of its use in a 3-inch medal size, a comment echoed by Mr. Jansen. Dr. Bugeja suggested that the depth of this design could be increased by incusing the plank. Ms. Stevens-Sollman was saddened that this design wasn’t being used for a medal, calling it a “powerful concept.” Mr. Hoge said this design was a “wonderful thing,” but more as a medal than a dollar, noting that the buildings below may “end up looking like some kind of microscopic circuit board.” 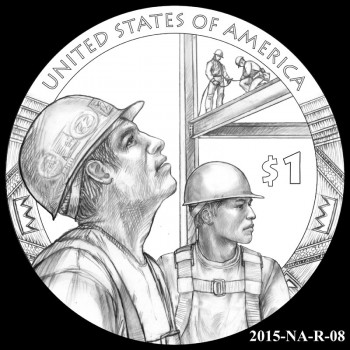 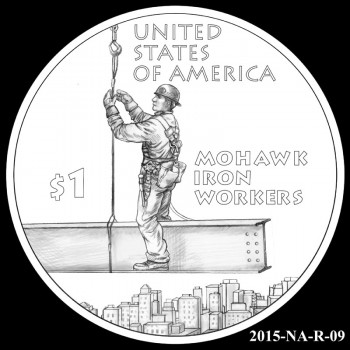 Mr. Olson recalled the font on this design being the same as in prior Native American dollar designs. Chairman Marks felt the image “might be a little small.” Mr. Jansen liked the baseline design, and felt the buildings at the bottom would not disappear, and indicated he would give it his strong support. 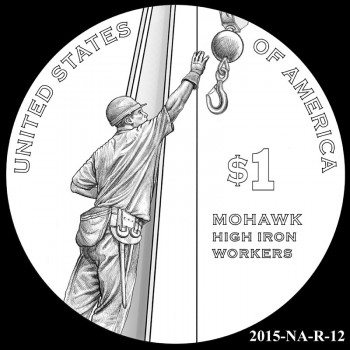 Mr. Olson noted that the worker reaching for the hook “gives a sense of perspective;” this worker is “definitely in a high place, and he’s definitely working hard there.” Ms. Wastweet called this design out as “another good choice.” Chairman Marks stated he was listening to the others’ comments, as his thoughts were not set yet. Mr. Jansen was disturbed by the beam in this design, feeling it would be a pointed piece of steel. Ms. Stevens-Sollman called this design a “simple, very powerful, strong image,” and mentioned that only this design had the phrase “High Iron Workers.” 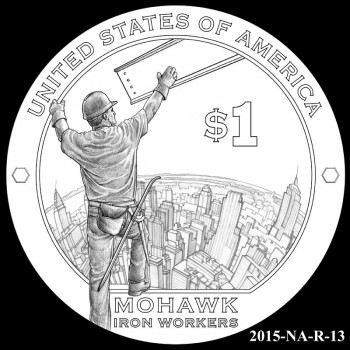 Mr. Uram commented that he would  have liked to see the burlap strap design around the edge, which “might enhance the design”, and called it as his first choice, with the modification he mentioned. Mr. Olson liked the perspective on this design, as well as the bolt heads on the sides of the rim. Ms. Wastweet appreciated the curvature of the Earth in this design, providing “a real sense of height,” and also thought it would a great medal. Chairman Marks liked the interaction of the worker with the design, finding it “interesting,” but was concerned about how it would look once scaled down to the coin. Mr. Jansen “loved the curved horizon” in this design, and called out that feature and the leg up on the Mohawk Ironworkers as the keys to the design, and planned to give it his full support. Mr. Hoge thought this design was “perhaps the best,” but he was “troubled about the cityscape could be shown properly.” 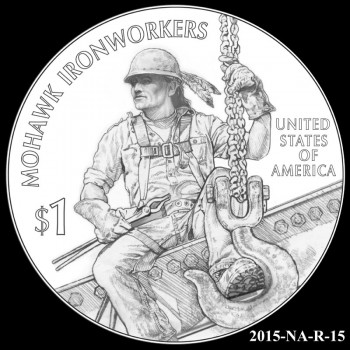 Mr. Uram said that this design had “a lot going for it.” Mr. Olson questioned the boot on this design, as it appears it would be pointing out from the design. Ms. Wastweet said this design “hit all the points”: it has a bold character, it is size-appropriate, and it is simple, but “has a lot of detail.” She called out this design with its use of feathers, as well as reassuring her fellow members that the sculptor will use their skills to make the boot look more dimensional than it does in the drawing. Chairman Marks found this design as his favorite, thinking it will “show well”: the lettering, the feathers in the hat, the bone structure and anatomy in the face, “all convey all that they want to convey,” and will give it his full support. Dr Bugeja found the artistry in this design to be “really wonderful.” Mr. Jansen saw “a rock star holding a guitar” in this design, and felt the feathers would disappear. Ms. Stevens-Sollman loved what the artist did with the gloves in this design, capturing the essence of working with metal. 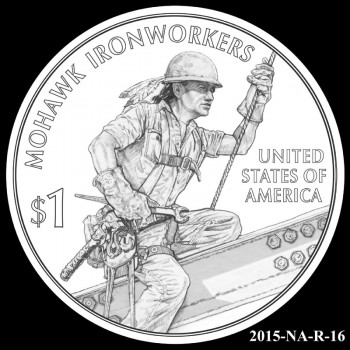 Mr. Olson indicated this design was not one of his preferences. Ms. Wastweet noted the dual image of the riding the beam, but is reminiscent of a Native American on a horse. Chairman Marks also liked this design, but not in comparison to design 15. 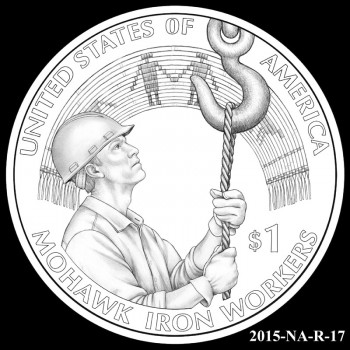 Mr. Olson found this design “too busy.” Ms. Wastweet felt the face looked “too Caucasian,” and the background design will get “a little busy.” Chairman Marks agreed with Ms. Wastweet’s facial comment, and didn’t think this was the best design. 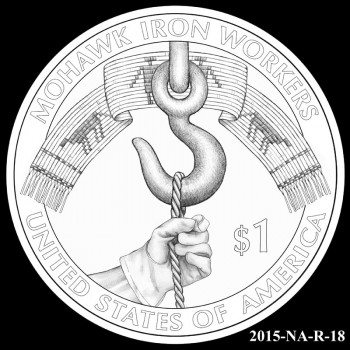 Mr. Olson thought this was “a nice design,” but there are better designs to select from. Ms. Wastweet also noted this design’s background element as being busy once reduced to the coin. Chairman Marks felt this design “lacked the sense of motion,” but he liked the drawing itself. Mr. Jansen disliked this design: to him, it doesn’t say “Mohawk Ironworkers” when he looked at it. 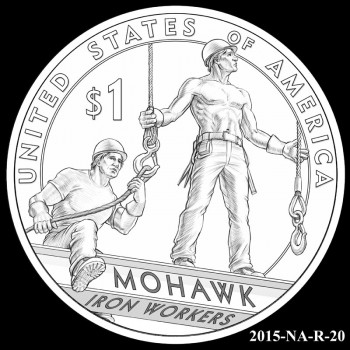 Mr. Olson questioned the perspective of the letters on the beam. Ms. Wastweet called this “an okay design,” but it didn’t rise to the top of her favorites. Chairman Marks liked the perspective, but felt the figures would look small on the dollar coin. Mr. Jansen called this design “cool” and “funky,” as well as “full frontal views,” and the message of Mohawk Ironworkers is unmistakable.

There were a number of motions after the vote. The first was to add Mohawk Ironworkers to design 4. During the motion discussion, Don Everhart from the Mint suggested running “United States of America” along the top rim of the design, and inserting “Mohawk Ironworkers” in the vacated space: the base motion to add the text passed unanimously. The second was to change the font on the “$1” symbol to match the font used in the 2009-2012 designs: this motion also passed unanimously. The third was to clarify the first motion, putting into official language the suggested implementation by Mr. Everhart “within the discretion of the artist”: the votes were 5 for, 2 against, and 1 abstention, passing the motion. The last was a twist, asking to set aside the 1-point margin that design 13 was given and instead recommend design 4, with the inclusion of an expansion of the second motion, changing the font throughout the design to the 2009-2012 style: this motion passed on a 6-2 vote, thus making design 4 the committee’s recommendation.