The Citizens Coinage Advisory Committee (CCAC) recently reviewed obverse and reverse design candidates for the Arnold Palmer Congressional Gold Medal. As stated by Kaarina Budow of the U.S. Mint, the Medal is being award to Mr. Palmer “in recognition of his service promoting excellence sportsmanship in golf.”

During the same October 26 meeting, the Committee had also reviewed the design candidates for the 2012 America the Beautiful Quarters and the New Frontier Congressional Gold Medal.

For the Arnold Palmer medal, Ms. Budow provided CCAC members with background information on Mr. Palmer’s career in golf, as well as other honorific activities and awards. The obverse and reverse design candidates were displayed and described, and the honoree’s preferences for obverse design 1 and reverse design 4 were indicated.

Committee members began their discussion, starting with Roger Burdette, who made the simple statement that the committee should “follow the desires of the individual receiving” the medal. He indicated he would support the designs that Mr. Palmer prefers: “It’s his medal”. Richard Meier was the next member to speak, and had a specific comment regarding the grip depicted on obverse design 1, which did not show the interlocking fingers that Mr. Palmer is shown to be using in the source photograph for the design. He was also inclined to abide by the designs that the honoree wants.

Michael Brown followed with similar comments to the previous two members, although he indicated that he liked the golf ball and tee as depicted on reverse design 2. Michael Olson indicated preferences for obverse design 1 and 4, and stated that obverse design 2 was “very interesting and it’s a little bit out of the box of what we’ve been seeing.” He would support the designs that Mr. Palmer wanted, as would Mike Ross who followed. Mr. Ross extended that sentiment by adding, “When Jack Nicklaus comes up, I’m going to put up a fight.” 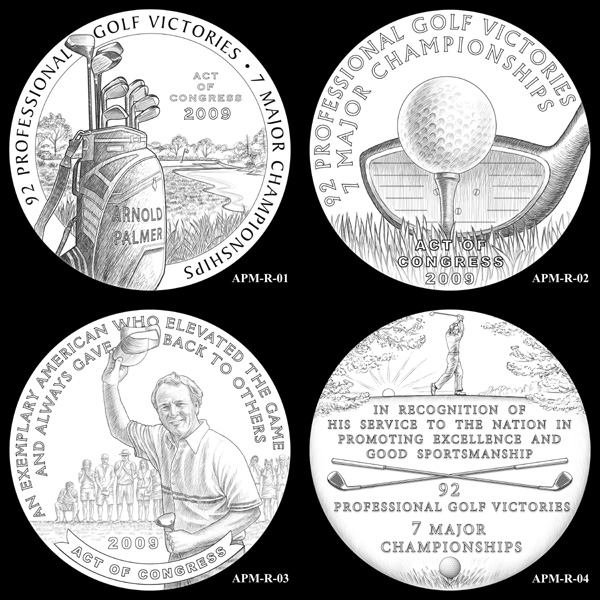 Heidi Wastweet commented on the “good catch” on the grip detail, as well as not seeing any problems with the “coinability” of reverse designs 1, 2, and 4. She would not support the third reverse design due to the details of the figures on the medal’s scale, but would support the honoree’s personal preference of the fourth reverse design.

Donald Scarinci’s comments ran counter to those of his fellow committee members, stating, “It isn’t Arnold Palmer’s medal; it’s a medal for the people of the United States.” He did agree that obverse design 1 is the best of the three candidates, which also happens to be the design that Mr. Palmer liked. However, he stated that reverse design 2 was “the clear choice artistically,” attempting to persuade the committee towards that design as it would “make a pretty medal that people might actually buy.” Dr. Doreen Bolger had nothing to add.

Chairman Gary Marks returned to the refrain of the majority, stating that he believed “Mr. Palmer will get the designs he wants.” He thought it appropriate to reiterate that the committee only has an advisory role to play, and “ultimately it will be the Secretary’s decision as to what designs are chosen”.

Stepping out of his administrative role and into the role of a committee member, Mr. Marks stated that his comments would be from the artistic viewpoint, and that obverse design 1 provides the best option, showing Mr. Palmer in action. Of the reverse designs, Mr. Marks had strong words for option 4: “when we reduce art to text, we have reduced the medal or the coin to a book,” moving from an object of beauty to be admired to an “item for reading.” He lent his verbal support for reverse design 2, as its depiction of a golf club and ball provide a “very striking, very focused setting.” 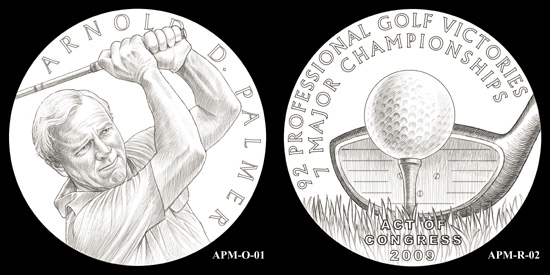 Once the votes were tallied, obverse design 1 was the clear committee favorite, receiving 25 of the possible 27 votes. Designs 2 received 6 votes, and design 3 received five. Of the reverse designs, the second was given 18 votes, with the fourth close behind with 16. Designs 1 and 3 obtained four and three votes, respectively. Under an update to the committee’s procedures, a design can only be recommended if it received over 50 percent of the possible votes. Obverse design 1 and reverse design 2 clearly met that threshold, and by doing so, were recommended by the committee.