The Citizens Coinage Advisory Committee (CCAC) met on November 29th, 2011, at the U.S. Mint’s headquarters in Washington, D.C., to review and discuss the reverse designs for the 2012 American Eagle Platinum Proof Coin. This release will continue a design series highlighting the core concepts of American democracy as found in the Preamble to the Constitution. The theme for this year’s coin will be “For the Common Defence.”

Mr. Harrigal began with a review of the authorizing legislation for the American Platinum Eagle coins, and provided the committee with a description of each reverse design. The CFA previously reviewed these designs, and preferred design 10. Prior to the in-depth discussion, the committee conducted an elimination vote to exclude designs: the third, sixth, and seventh designs were so excluded, and would not be discussed.

On many of the designs, concerns about the large size of the valuations were expressed. There was a difference of opinions with regard to the use of a rifle in design 4: some saw it as symbol of offense, where others acknowledge it as a tool for defending one’s land. Other concerns surrounding the use of the classic spelling of “DEFENCE”, rather than the modern “DEFENSE”: it could be an opportunity for education. The size of the flag in design 9 was considered to be out of proportion. The use of shields in many of the designs seemed to have its supporters and detractors as well, overly simplifying the imagery.

The committee votes for the 2012 Proof Platinum Eagle reverse design candidates were as follows:

With 13 votes out of a possible 21, design 4 received the committee’s recommendation.

Editor’s Note: This article is published with a delay after the CCAC meeting took place. It was written as soon as possible after meeting transcript information was made available. 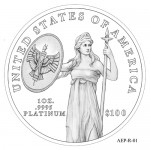 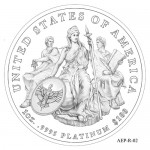 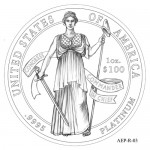 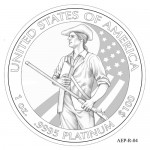 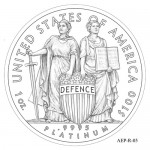 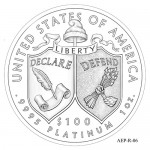 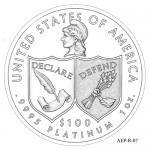 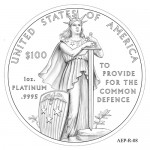 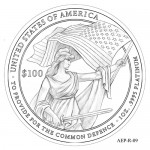 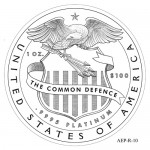 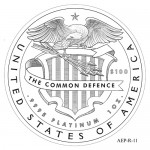