The Citizens Coinage Advisory Committee convened by telephone in administrative and public meetings on Tuesday, June 23, 2020. United States Mint Director David J. Ryder connected to the meetings from Mint headquarters on Ninth Street in Washington. In a sign of the times, other Mint officers and staff called in from their home offices, and all 11 CCAC members participated by Internet and phone.

The public meeting focused on several important coin and medal programs that will roll out over the next year or so. The biggest agenda item by far involved design changes for the reverses of the American Silver Eagle and gold bullion coins.

Collectors and investors have purchased hundreds of millions of these precious-metal coins since the United States’ hugely popular bullion-coin program started in 1986. The silver and gold pieces are minted as commodities—a convenient way to invest in government-backed bullion—and also as collectibles, with Proofs and other special formats available for hobbyists and gift-givers. 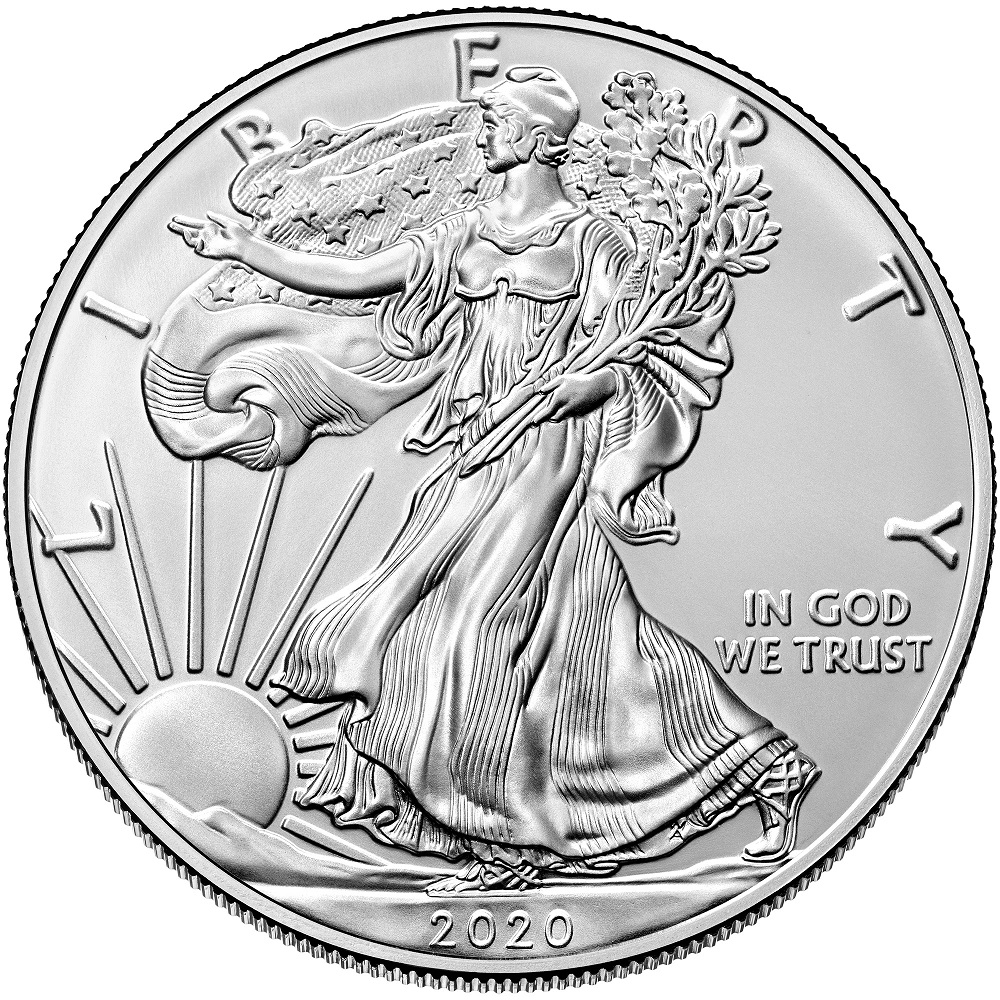 The obverse and reverse used on the American Silver Eagle from 1986 to 2020. A new reverse will replace John Mercanti’s heraldic eagle in 2021. (Images courtesy of the United States Mint). Hover to zoom. 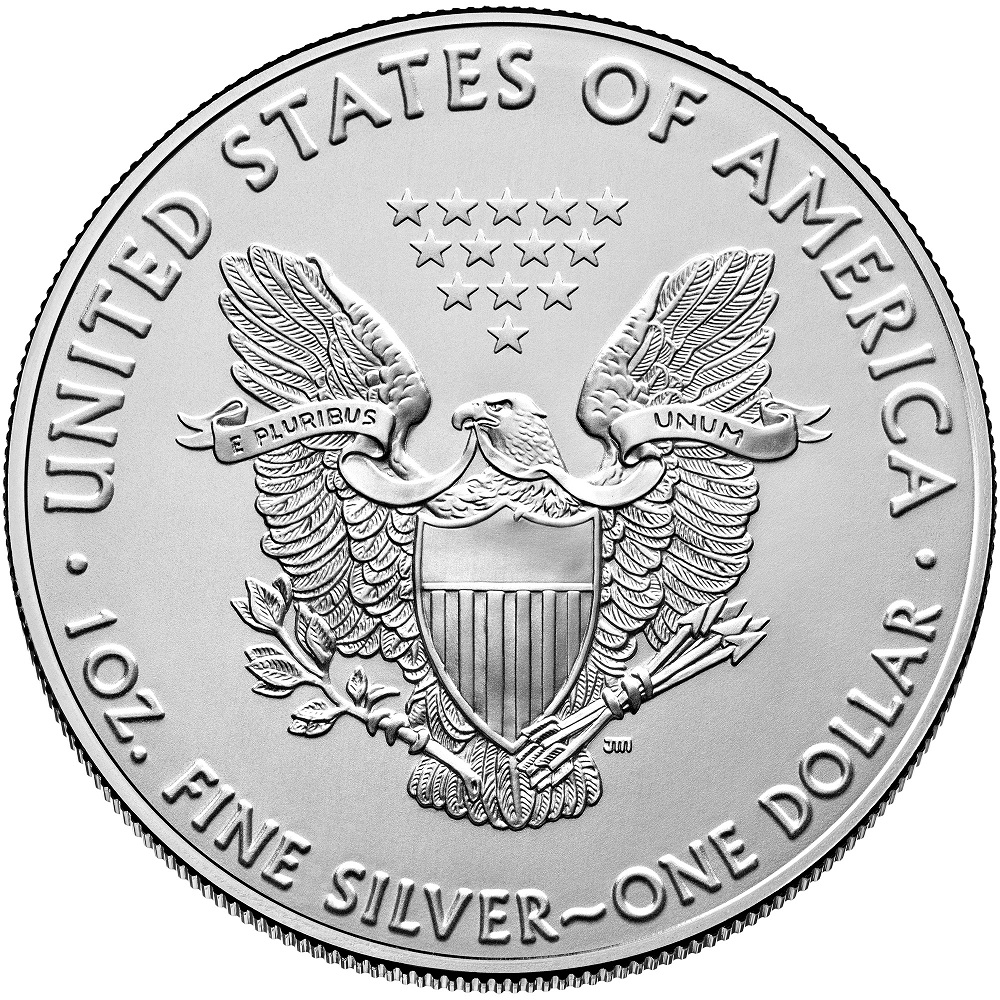 Members of the CCAC—a congressionally established public committee that advises the Secretary of the Treasury on coinage and medal themes and designs—expressed their sense of the importance of their proceedings.

Donald Scarinci, the committee’s longest-serving member, said, “This is one of the most exciting things we’ve been called upon to do.” He described the gold and silver American Eagles as two of the nation’s “most iconic coins” and said he was humbled by the design review process.

Member Sam Gill echoed the sentiment, calling the American Eagles the most challenging coins the committee has worked on since he joined, “and a responsibility.”

Member Dean Kotlowski noted that the designs must stand the test of time. The new motifs will likely occupy the nation’s bullion coins for at least the next 25 years. Member Jeanne Stevens-Sollman agreed, urging the committee to “look at longevity” and saying that the chosen designs must be “fabulous.” 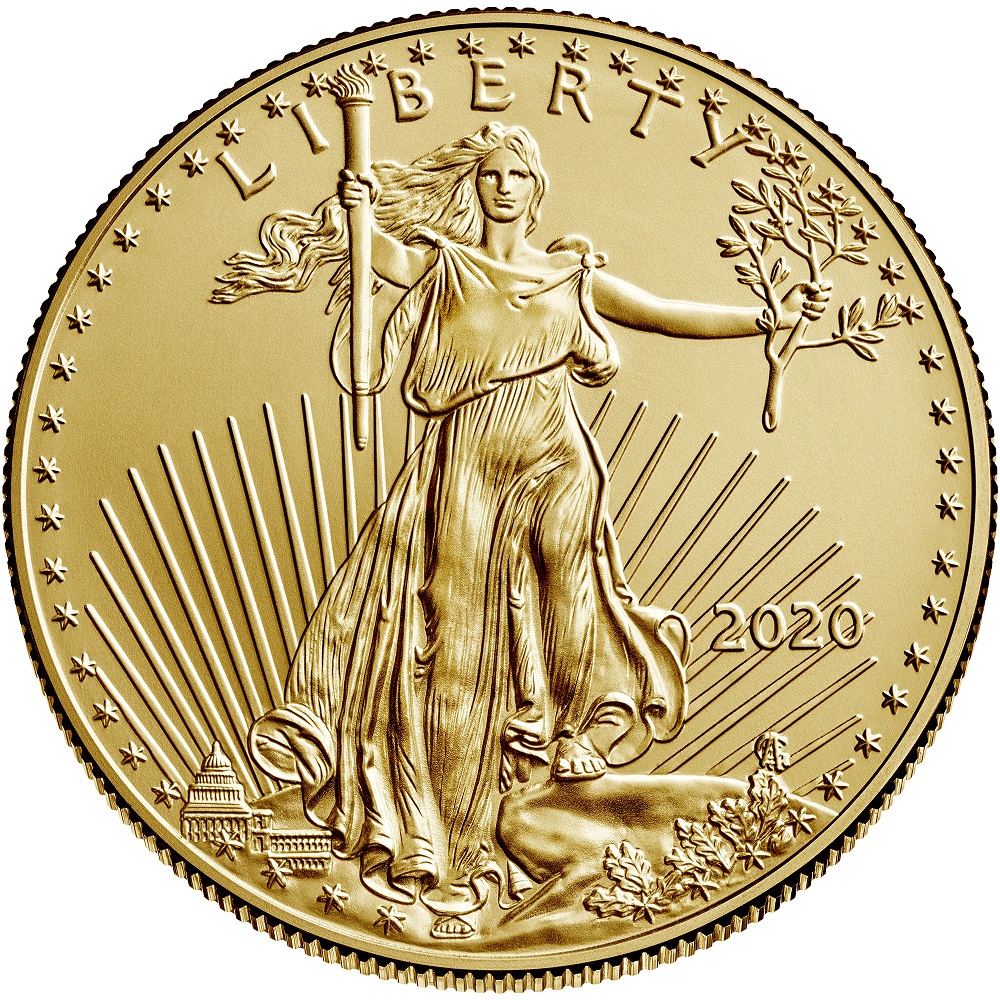 The obverse and reverse of the American Gold Eagle, 1986 to 2020. Miley Busiek’s “Family of Eagles” reverse is scheduled to change in 2021. (Images courtesy of the United States Mint). 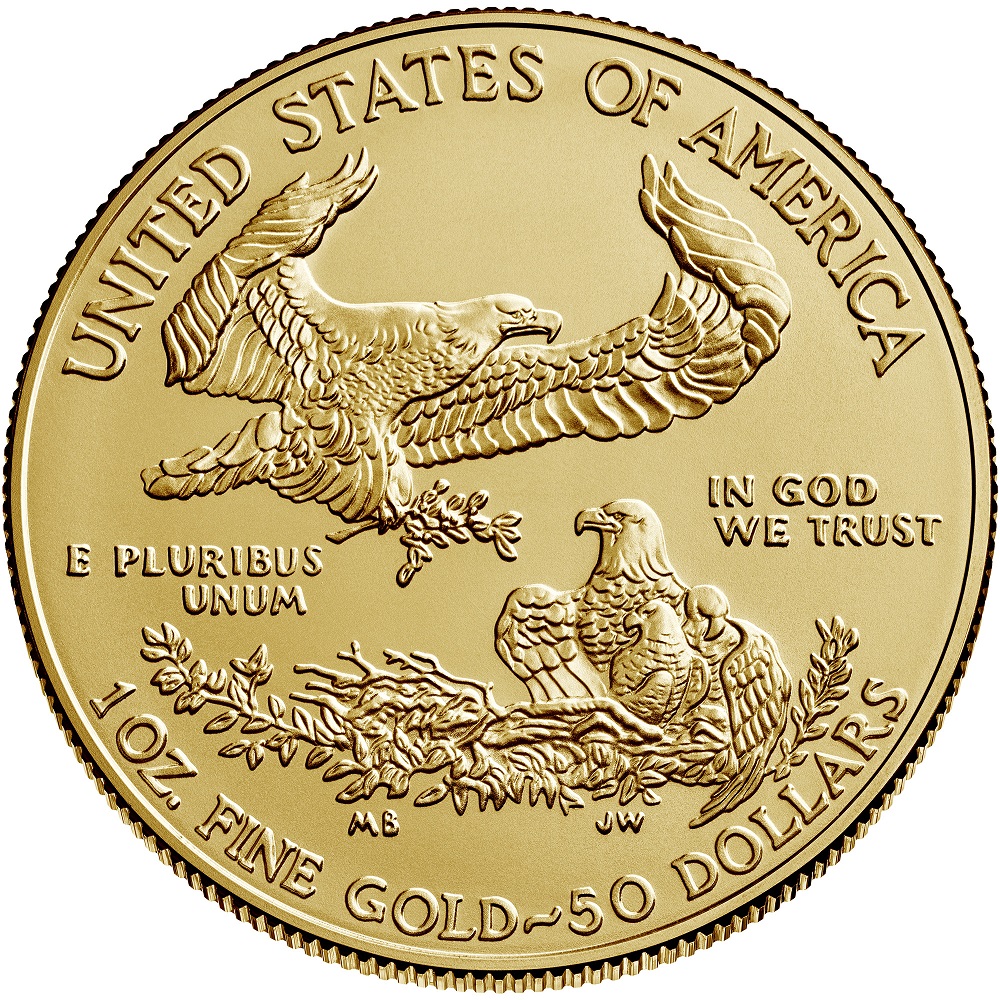 High Praise for the Mint’s Artists

Design candidates were submitted by artists of the Mint’s Philadelphia-based staff, as well as from its Artistic Infusion Program, which involves talent from around the country.

Member Robert Hoge said he was impressed with the beauty of the proposals, which numbered 39 in total. The committee as a whole had similar praise for the artists. Some of the adjectives used in the course of the public meeting were compelling, excellent, extraordinary, phenomenal, powerful, stunning, emblematic, majestic, innovative, spectacular, and refreshing.

“I like this package in total,” said member Michael Moran. Former committee chair Mary N. Lannin called the portfolio “enormous” and said, “The ones we don’t use, need to be kept somewhere” for use on future coins or medals. 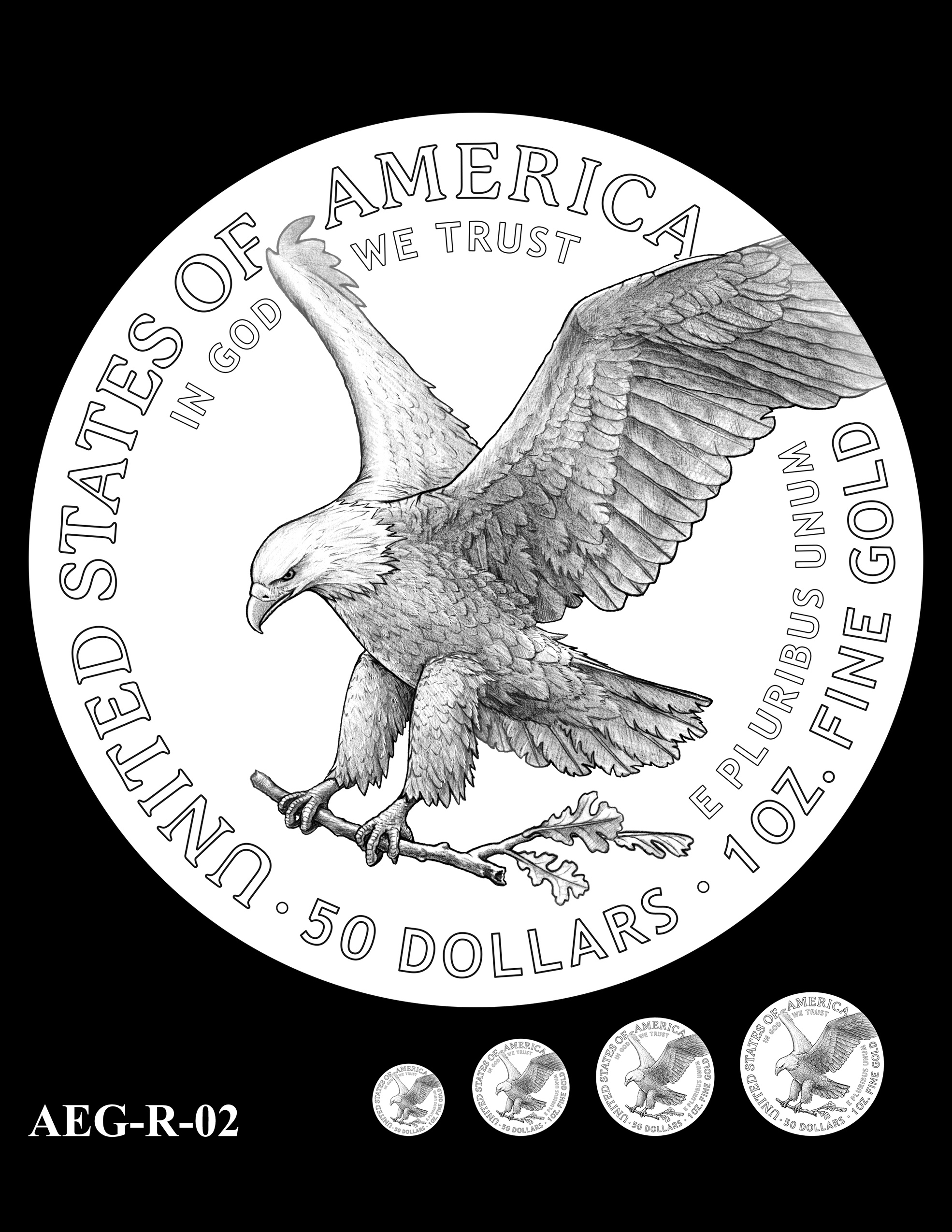 The new reverse design recommended by the U.S. Commission of Fine Arts. (Image courtesy of the United States Mint).

A New Reverse for the American Gold Eagle

Since 1986, the obverse of the American Gold Eagle has featured a slightly modernized version of Augustus Saint-Gaudens’s classic striding Miss Liberty, a design that graced the $20 gold coin minted from 1907 to 1933. The famous artist’s depiction of Liberty, draped in flowing dress and holding aloft a flaming torch and an olive branch, is widely admired as one of the most beautiful American coinage designs—a masterful study of movement and symbolism. It will remain on the coins while the reverse changes in 2021.

The reverse of the American Gold Eagle has featured artist Miley Busiek’s “Family of Eagles” design. This shows a male bald eagle flying with an olive branch clutched in his talons, bringing it to his nesting mate and their hatchlings.

“At the time of its debut,” CCAC member Dennis Tucker noted, Busiek’s art “was something unusual in American coin design. Did its style and theme match the strength of Augustus Saint-Gaudens’s obverse? That’s a matter of debate in the hobby community. But at the time it did offer a different view of the bald eagle than what American coinage had seen between the 1790s and the early 1980s.” Keeping in that spirit, Mr. Tucker weighted his review toward designs that offer a new perspective.

Mr. Gill called Busiek’s current reverse design “classic and beautiful.” When reviewing the proposals, he looked for a design that would be emblematic of the United States, denoting strength and pride. He described the role of gold and silver in the world financial community and said the coins must continue to represent the United States well.

Mr. Scarinci urged the committee to avoid designs that are cluttered. “Nothing too busy,” he said. “No two eagles. It doesn’t need a U.S. flag.” He noted that it’s the reverse of the coin that will be changed, not the obverse, so in his review of the designs, he disqualified those that treated the eagle as a humanized portrait, which would be more appropriate for the front of a coin.

Mr. Moran kept three questions in mind as he reviewed each design: Is it consistent with the obverse? Is it significantly different from the 1986 to 2020 reverse? And is it scalable to the smallest gold-coin diameter? (The 10th-ounce gold coin measures 16.5 millimeters, smaller than a dime.) 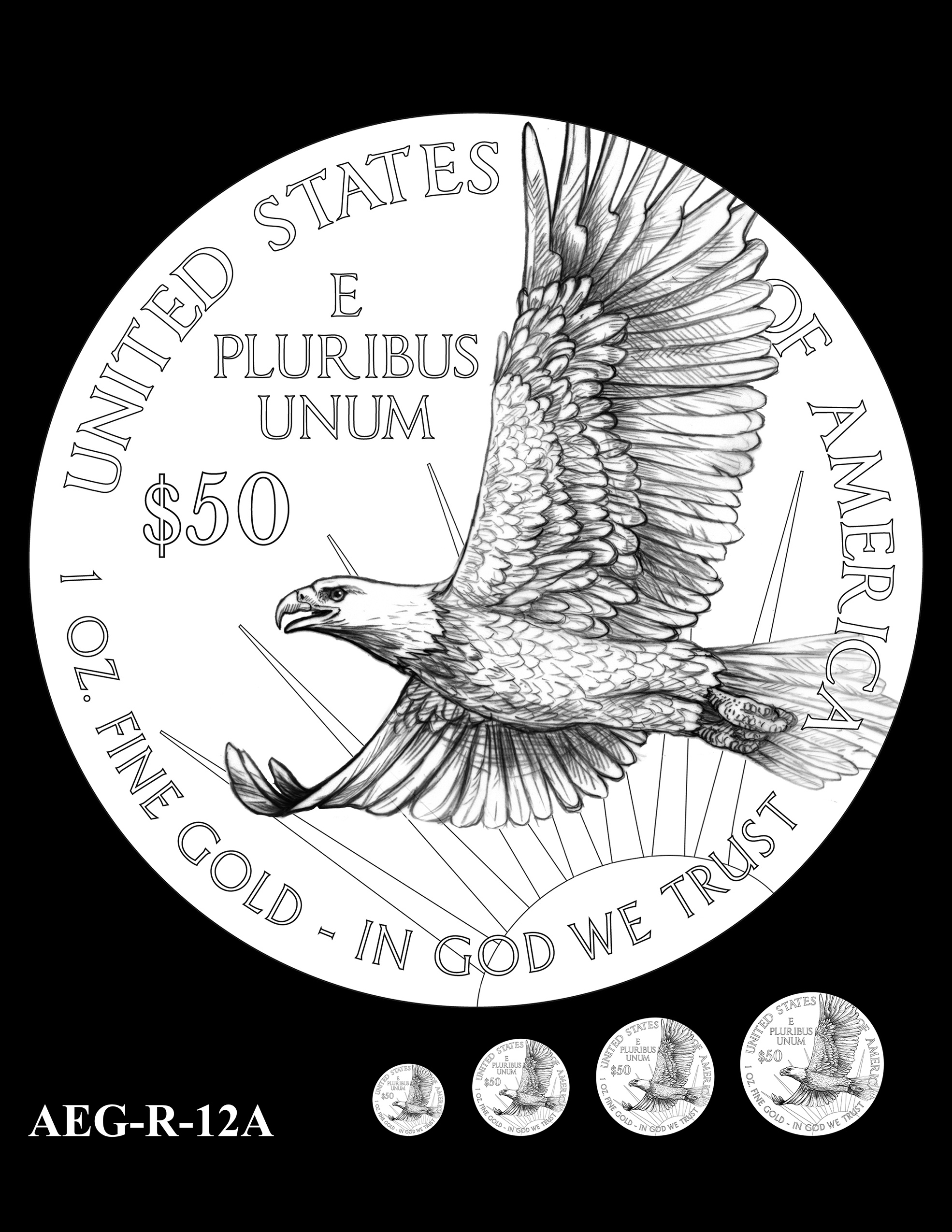 After several rounds of review and discussion, the committee passed a motion to recommend design AEG-R-12A for the reverse of the American Gold Eagle. The design shows an eagle in dramatic flight against the rising sun. 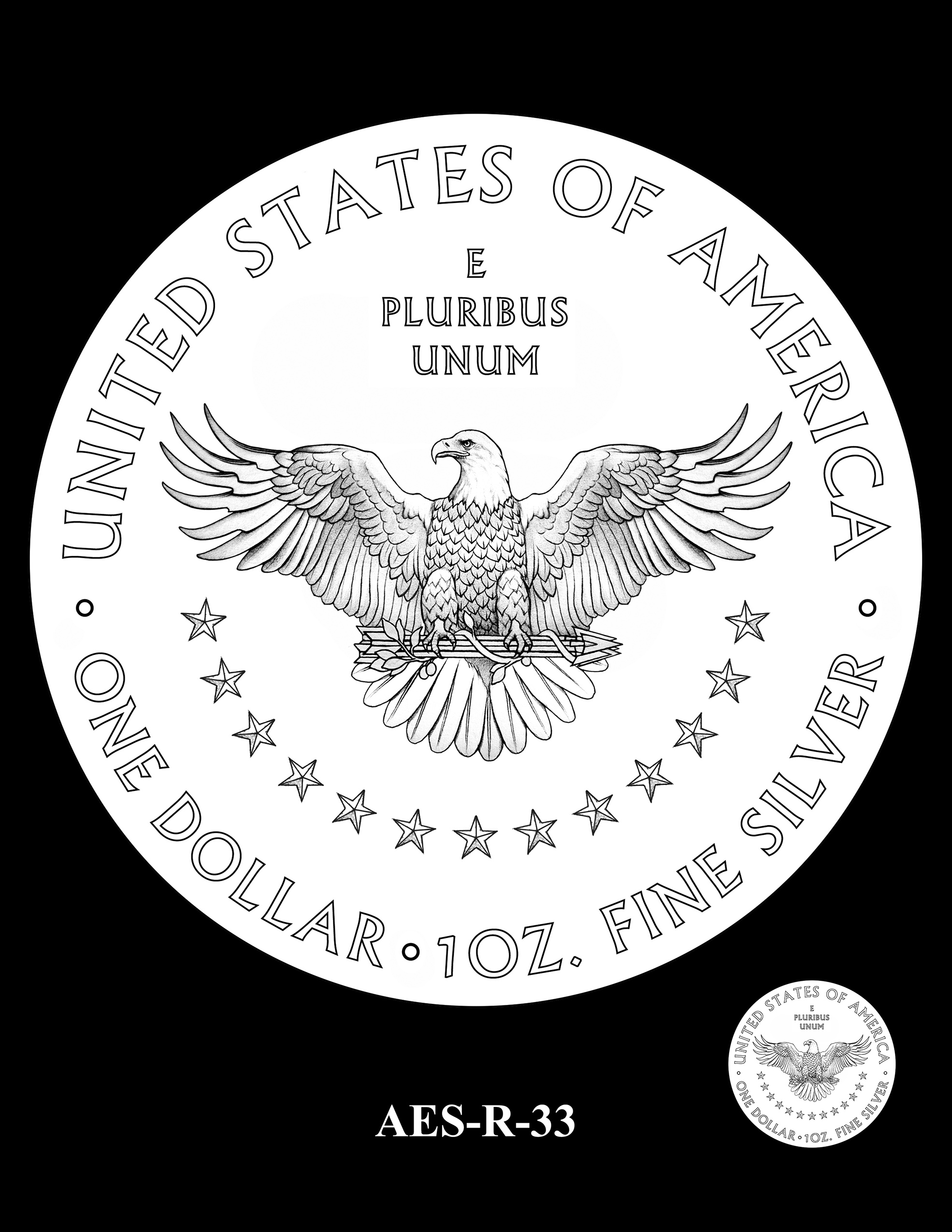 The new reverse design recommended by the U.S. Commission of Fine Arts. (Image courtesy of the United States Mint).

A New Design for the American Silver Eagle

As with its gold companion, the obverse of the American Silver Eagle will remain unchanged. It showcases Adolph A. Weinman’s Liberty Walking design (slightly modified). The artist’s inspiring view of Miss Liberty was minted on U.S. half dollars from 1916 to 1947, and, like Saint-Gaudens’s work, is considered one of the most engaging classic American coin designs.

From 1986 to 2020, the reverse of the American Silver Eagle has carried a balanced and stately heraldic eagle designed and sculpted by former chief engraver John Mercanti.

In the June 23 meeting, Mr. Scarinci recognized Mr. Mercanti as a fine artist with many great coin designs to his credit, but said, after 35 years, “We need a more interesting eagle for the silver.”

CCAC member Lawrence Brown expressed gratitude for the opportunity to advise the Treasury Department on such an important U.S. coinage program. He commended all of the artists involved, calling out several designs as “phenomenal,” “moving,” and “majestic.”

Committee chairman Thomas Uram classed the designs in three concepts—eagles in flight, eagles landing, and eagles on watch. He preferred a stoic eagle on watch for the gold coin, and an eagle in flight for the silver.

Member Robin Salmon stressed the importance of accuracy in the eagles’ anatomy. “I found myself counting primaries,” she said, referring to the birds’ large flight feathers.

Mr. Hoge cautioned that some designs might be attractive as drawings but challenging to sculpt—a warning often voiced by the committee when proposal sketches rely too much on shading and contrast. Those artistic factors are difficult to capture in metal and translate to a small coin-sized canvas. The sculpted designs must also be technically suited for high-volume minting.

Many committee members urged innovation in the designs. Mr. Tucker pointed out that the regular bullion coins account for most of the mintage of American Silver Eagles. From the commodity perspective, a traditional, conservative design would be acceptable. However, he observed, the coins also have extra value for collectors, who pay higher premiums for the Proof, Enhanced Uncirculated, and other special numismatic formats. Several committee members said that collectors and casual buyers will want to see something eye-catching, attractive, and different. 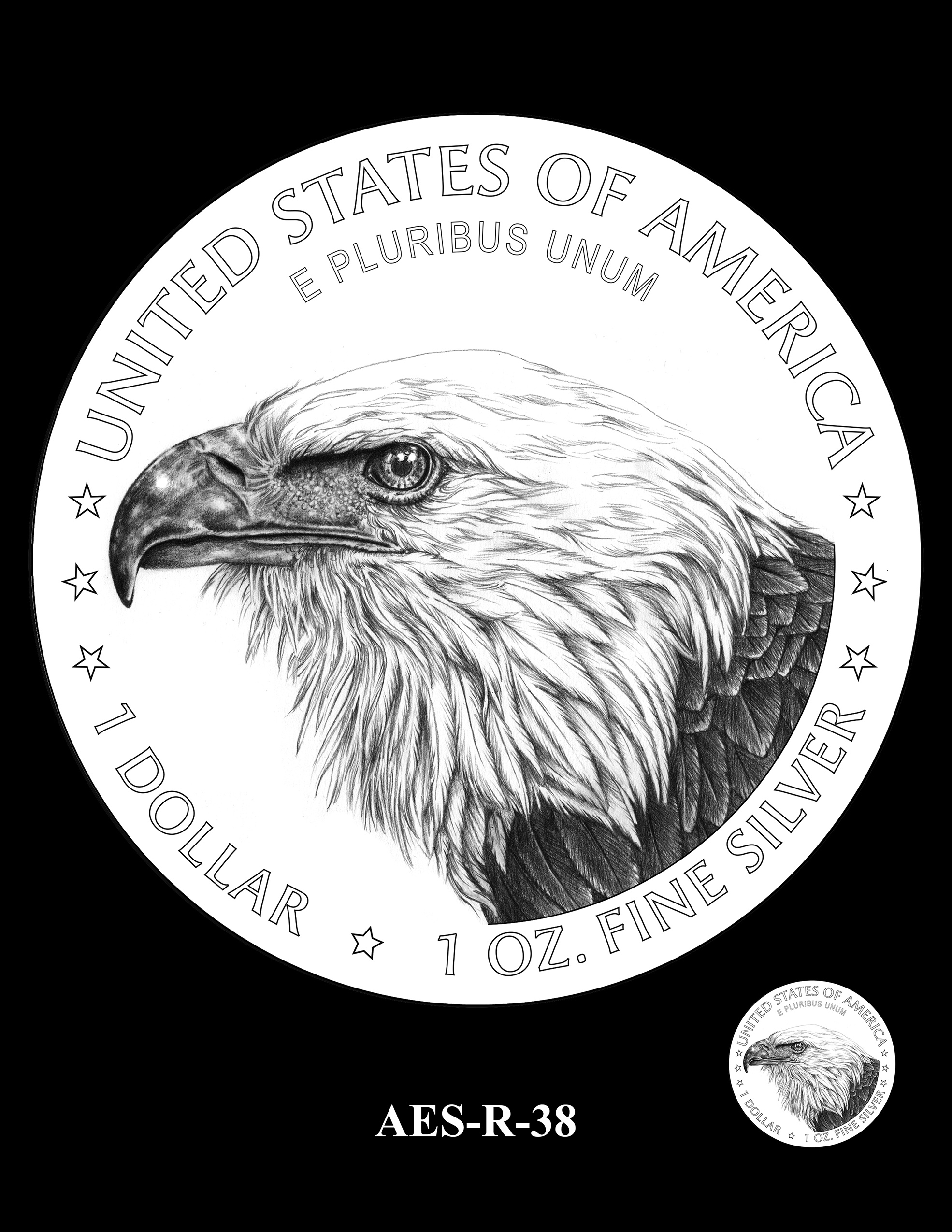 For the American Silver Eagle, after review and discussion of the design portfolio, the CCAC voted to recommend AES-R-38 to the Secretary of the Treasury. Its motif is a bold close-up profile view of an eagle’s head and shoulder.

The Future of the American Eagle Program

The final decision for the coins’ new designs lies with Treasury Secretary Steven Mnuchin. The CCAC makes its formal recommendations to the Secretary, who also receives advice on coin and medal designs from the U.S. Commission of Fine Arts. (For the American Gold Eagle, the CFA recommended AEG-R-02, an eagle in downward flight carrying an oak branch; and for the American Silver Eagle, AES-R-33, a heraldic eagle with outstretched wings, perched on a clutch of arrows and olive sprigs.) Secretary Mnuchin is expected to make his decisions this year.

Traditionally, production of the nation’s gold and silver bullion coins has started late in the year preceding their release. In recent years the regular-strike bullion coins have been minted mostly at the Mint’s West Point, New York, facility (popularly known as the “Fort Knox of Silver”), with most of the special collector coins also minted at West Point. However, the San Francisco and Philadelphia mints have also been used to produce both bullion-strike and numismatic versions of the coins. Packaging options, production schedules, and special finishes and formats have yet to be announced.