On June 28th, 2010, in response to the lackluster designs the Citizens Coinage Advisory Committee (CCAC) was seeing during their reviews, Chairman Gary Marks formed a subcommittee on Coin Design Excellence, with the assignment to “develop a comprehensive set of recommendations addressing design quality to the Secretary of the Treasury regarding all future theme and design proposals relating to circulating coinage, bullion coinage, commemorative coinage, congressional gold medals and national and other medals produced by the Secretary of the Treasury.” 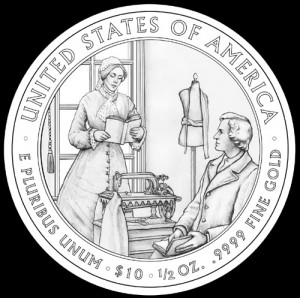 Eliza Johnson candidate design criticized by CCAC for historical innaccuracy. The type of sewing machine depicted was not yet invented.

On January 19th, 2011, the result of their efforts was reviewed by the full committee, and unanimously approved. CoinUpdate had previously reported on the live tweets from Donald Scarinci from that meeting, but here is the summary of their recommendations from the actual report:

RECOMMENDATION #1:
That all responsibility for artistic design be removed from the United States Mint Sales and Marketing Department and that the Design Working Group be abolished. We recommend, instead, that the position of Art Director be created and that an interdisciplinary group (we will refer to it as the Timetable Task Force (TTF) for brevity) be established to coordinate and streamline the artistic and manufacturing schedules.

RECOMMENDATION #2:
That the status of the United States Mint Sculptor-Engravers be elevated, that their creativity be encouraged and utilized in design projects and that the current call for Artistic Infusion Program request for proposals (RFP) be substantially revised to elevate the creative qualities of originality and innovation to the same level of importance expressed in the current RFP for the basic competency requirements of technical draftsmanship.

RECOMMENDATION #3:
We recommend changes in the methodology for design review at the CFA and the CCAC and we recommend that the United States Mint contract with an outside historian for assistance with historical accuracy of designs.

The full CCAC Report A Blueprint for Advancing Artistic Creativity and Excellence in United States Coins and Medals can be accessed here. (Link goes to Scribd, as the report has not yet been been made available on the CCAC website.)