After the selection of the designs, production, and presentation of the gold medals, the authorizing legislation states that the Smithsonian Institution shall accept and maintain the gold medals and is encouraged to create a standing exhibit for Native American code talkers or Native American veterans. Silver duplicate medals will be awarded to members (or their next of kin or other personal representative) of the recognized Native American tribes who served in the Armed Forces as a code talker. Bronze duplicate medals are expected to be struck and made available for sale to the public. 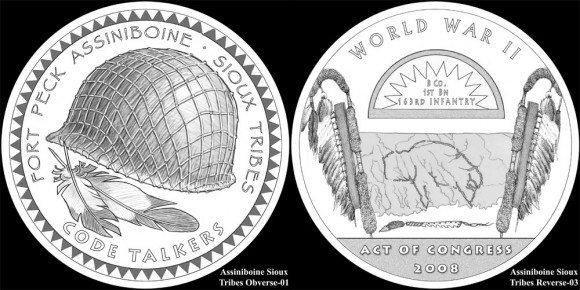 From a field of five different obverse design candidates featuring the elements of the Infantry helmet and radio communications equipment, the CCAC recommended candidate 1. From four different options for the reverse, the CCAC recommended candidate 3, featuring an outline of the Fort Peck Indian reservation and the 41st Infantry Division Patch. Both recommendations matched the tribe preferences. 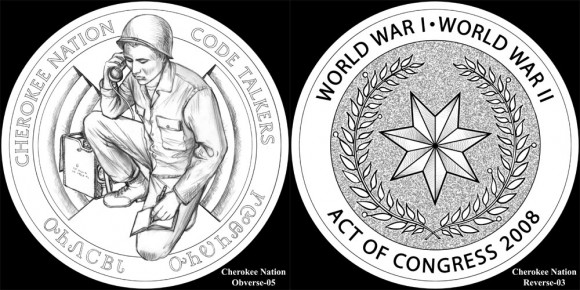 Five different obverse design candidates were provided featuring Cherokee National code talkers communicating on the field phone. One of the candidates incorporated a second figure using binoculars. The CCAC recommended design 5 featuring a code talker with a field phone and also writing. For the reverse the CCAC recommended design 3, featuring the Cherokee Nation seal. The seven-pointed star represents the traditional seven clans of Cherokee: the Bird, Wild Potato, Deer, Long Hair, Blue, Paint, and Wolf Clans. The wreath of leaves and acorns represent the sacred fire of the Cherokee. The CCAC’s recommendation for the reverse matched the tribe preference. No preference was provided for the obverse. 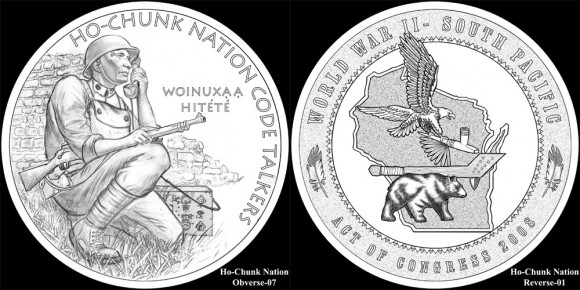 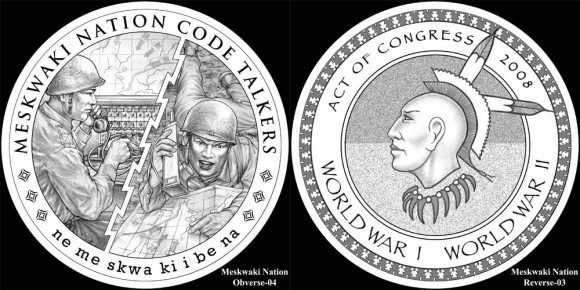 From four different obverse design candidates, the CCAC recommended alternative 4, matching the preference of the tribe. The inscriptions on each candidate incorporated “ne me skwa, ki i be na,” which translates to “We are the Red Earth People.” For the reverse, the CCAC recommended alternative 3, featuring the Meskwaki Nation Tribal logo. This matched the preference of the tribe. 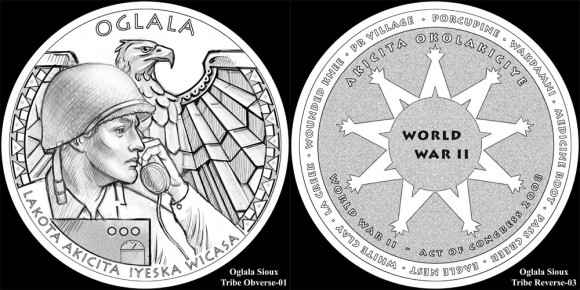 There were three different obverse and six different reverse design candidates provided for the Oglala Sioux Tribe code talkers medal. The CCAC recommended obverse 1 and reverse 3, matching the preferences of the tribe. The CCAC did make a motion to remove the inscription “World War II” from the bottom right arc on the reverse. The reverse design is based on the Oglala Sioux Tribe flag. The nine tipis represent the nine districts of Oglala, Porcupine, Wakpamni, Medicine Root, Pass Creek, Eagle Nest, White Clay, PR Village, La Creek, and Wounded Knee. 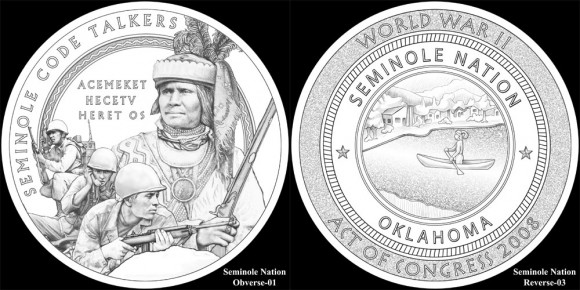 Six different design candidates each were provided for the obverse and reverse of the Seminole Nation Code Talkers Medal. The CCAC recommended obverse 1 and reverse 3 matching the preferences of the tribe. The obverse design includes an early period chief in the background with an inscription “ACEMEKET HECETV HERET OS”, which translates to “It is Good To Climb and See.” The reverse depicts the Seminole Nation of Oklahoma seal. The CCAC made a motion to add the word “of” to the reverse inscription. 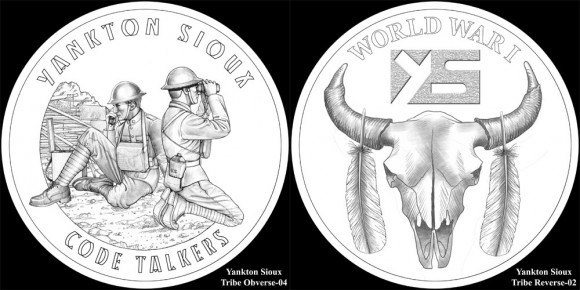