During a teleconference meeting held on July 8th, 2014, the Citizens Coinage Advisory Committee (CCAC) reviewed and discussed the design direction for the Doolittle Tokyo Raiders Congressional Gold Medal. Under Public Law 113-106, the medal was authorized to be awarded to the World War II members of the 17th Bombardment Group (Medium) who became known as the “Doolittle Tokyo Raiders” for outstanding heroism, valor, skill, and service to the United States in conducting the bombings of Tokyo. 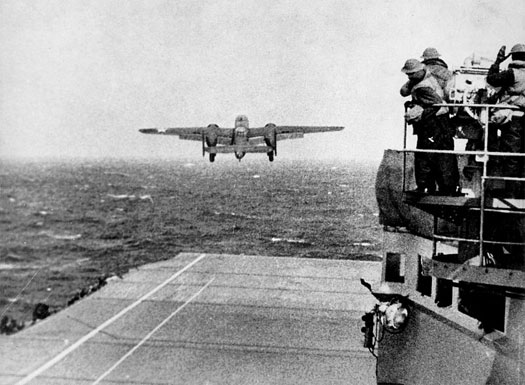 Take off from the deck of the USS HORNET of an Army B-25 on its way to take part in first U.S. air raid on Japan. Doolittle Raid, April 1942.

The Doolittle Tokyo Raiders were a group of 16 B-25B Mitchell medium bombers that were launched on April 18th, 1942, to conduct an air raid on the Japanese capital Tokyo and other places on Honshu island during World War II. It demonstrated that the Japanese homeland was vulnerable to American air attack, was retaliation for the Japanese attack on Pearl Harbor, provided an important boost to U.S. morale, and damaged Japanese morale. The raid was planned and led by U.S. Army Air Forces Lieutenant Colonel James “Jimmy” Doolittle, but used the USS Hornet as a transport vessel, making it the first joint Army Air Corps/Navy operation of the war. The mission sufficiently changed the mindset of the Japanese leadership that they withheld resources to protect the islands, thus opening the way for Allied forces to win key battles, including the Battle of Midway.

The discussion of the design direction for the medal was relatively light amongst the members. There was a general consensus that including both the B25B Mitchell bombers and the USS Hornet would honor the joint mission between the two sections of the military. Where simplicity is usually called for in other designs, thus necessitating the use of symbolism to represent many events, this being a single mission led some members to call for a more technical interpretation of the event: the aircraft launching from the aircraft carrier, and the topology of the Japanese islands that was their target. The inclusion of the insignias from the units involved in the raid received a mixed reception from the members.