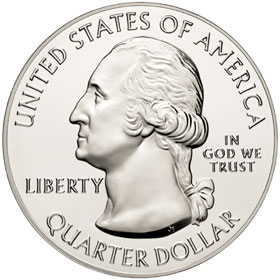 During a meeting held on May 19th, 2014 at the Omni Hotel in Philadelphia, Pennsylvania, the Citizens Coinage Advisory Committee (CCAC)  reviewed and discussed concepts for the 2016 America the Beautiful Quarters. In attendance were Chairman Gary Marks, Dr Michael Bugeja, Robert Hoge, Erik Jansen, Jeanne Stevens-Sollman, Thomas Uram, and Heidi Wastweet, as well as members of the United States Mint staff and members of the Artistic Infusion Program. At the meeting, Mary Lannin was sworn in as the committee’s newest member.

Dr. Michael Bugeja gave general comments how many classic commemorative coins contain designs that would be criticized by the committee as being either too busy or storyboards. Donald Scarinci noted that the committee should define what they mean by “storyboard”, in order to speak with a unified voice, as well as admitting that limitations of the design structure are set by Congress and the Treasury Secretary. He also cautioned on putting too many devices together. Jeanne Stevens-Sollman asked for a single image for each coin: “the icon should be overpowering.” Mary Lannin favored designs that were either imagery or symbol for the site, but each has to be “simple” and “clean”. Erik Jansen asked that the source material for the designs be shifted from nouns to verbs: “action designs speak from action words”. He concluded with the belief that the designs should lead people to either visit the sites, or learn more about the sites. Chairman Marks indicated he would like to see cannons, if done properly.

The site was represented by Amanda Patrick, from the site’s Public Affairs office. There were no specific comments made by the committee regarding the concept for this site.

The site was represented by Carol Borneman, chief of interpretation. Heidi Wastweet noted her aversion to “postcard” designs, and encouraged the use of footprints to indicate the site’s use as a passageway. Michael Moran believed they should stay away from the animals, “should focus on the people”.  Thomas Uram echoed the “puts a lot of motion into the coin”.

The site was represented by Park Ranger Autumn Cooke. Heidi Wastweet liked the idea of the bridge, calling it an important icon. Michael Moran was struck by the town’s resemblance to its historical appearance.

The site was represented by Valerie Naylor, site superintendent. Chairman Marks has visited the park, and the presence of bison was one that he took from that visit. Michael Moran cautioned that it will be difficult to find a proper image of Roosevelt. Thomas Uram repeated the challenge in a younger Roosevelt. Donald Scarinci lamented that Roosevelt is not on the obverse, and was concerned about seeing him on horseback.

The site was represented by Tim Stone, site superintendent. Chairman Marks said that an image of Sergeant Jasper raising the flag, provided “an interesting perspective”; he hoped this design would be distinguishable from recent works already produced. Heidi Wastweet said epic scenes would not appropriate for the size of coin. Donald Scarinci remarked that the flag-raising would be a “central image for Fort Sumter”, so long as it was different from the Iwo Jima image. He did not believe cannons were appropriate, as it is difficult to differentiate one from another on this size coin.