The Citizens Coinage Advisory Committee (CCAC) met on June 27th, 2011 in Colorado Springs to discuss the reverse design candidates for the 2012 Native American Dollar. The series features the contributions and accomplishments of Native Americans on annually rotating reverse designs, paired with an obverse portrait of Sacagawea.

Ron Harrigal from the U.S. Mint provided the committee members with the public law for the coin series and the theme for this particular year’s designs: trade routes of the 17th Century, and key to those trade routes was the horse.

Mr. Harrigal then provided brief descriptions of the thirteen design candidates and informed the committee that the Commission of Fine Arts reviewed these designs and recommended design 8 with a couple suggestions: remove the galloping horses in the background and move the denomination away from the profile. He also stated that three consulting groups, the Congressional Native American Caucus, the Senate Committee of Indian Affairs, and the National Congress of American Indians, reviewed the designs and recommended designs 4, 7, and 8. 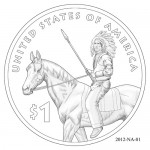 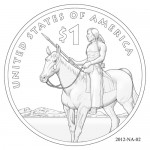 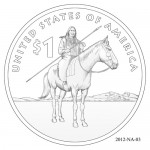 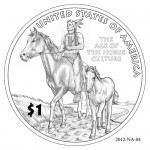 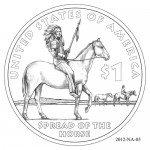 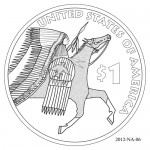 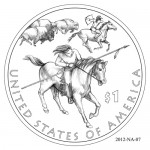 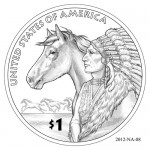 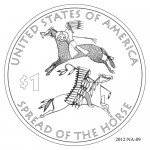 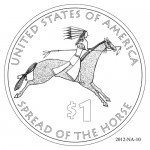 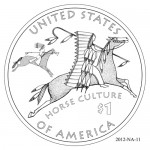 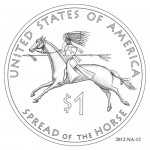 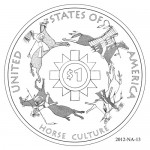 Prior to the committee members’ comments, Erik Jansen, Heidi Wastweet, Mike Ross and Chairman Gary Marks asked questions of Jim Adams from the National Museum of the American Indian regarding various items: the background of Ledger art, the use of different head gear on the horses, and the depiction of spears and their intended uses.

Heidi Wastweet started the formal comments from the committee. She thought that the horse in designs 1 and 2 looked more like an Arabian than the American Indian pony that was intended to be depicted. Design 3 appeared “as if a wide angle lens was taking a picture here,” and she was not fond of it. She found design 4 to be a “really wonderful, wonderful drawing and symbolically it shows really the core of what we are talking about,” but had concerns that the drawing would not translate to a coin. She thought that the phrase “SPREAD OF THE HORSE” in design 5 would not make sense to foreigners who would visit us and see this coin. She was in favor of the Ledger drawings in design 6, but felt is was “an odd composition,” and design 7, while a “beautiful drawing,” seems to her as depicting a hunting theme rather than a trading theme. Design 8, in her opinion, communicated the symbology of the theme with the horses running in the background. She disagreed with the CFA’s recommendation to remove the horses, as that action would “totally go against the symbology that is trying to be represented here.” In addition, the horses in the design are clearly American Indian ponies, and look “very authentic.” The next four designs, 8 through 12, were quite similar to Ms. Wastweet, who had difficulty picking a favorite. They also included the “SPREAD OF THE HORSE” phrase she was not fond of, but despite that objection, she did like design 12 “as it it focuses most on the horse. It doesn’t say war. It doesn’t say hunting. It clearly says horse. It has that authentic American voice.” On design 13, she liked the design but asked Mint engraver Don Everhart his opinion on the scale of the design for the dollar coin. He said that the Ledger style of the design “could be rendered simply enough so that the composition could work at that scale.” She reserved calling out her favorite design until the other committee members commented.

Mike Ross, the historian on the committee, was attending the meeting via teleconference, and had questions for Mr. Adams concerning the depictions of the headdresses, which is a symbol of performance in battles. Mr. Ross opined that the headdresses were in conflict with the theme of this coin, and was concerned about “honoring the horse as the facilitator of warfare, rather than trade.” He found himself stuck between those designs that didn’t “send a marshal message,” namely designs 7 and 8, but he really liked the Ledger drawings, but thought that they send the wrong message to kids, showing them the contributions of the Native Americans was that “they developed the horse to kill one another.” Ms. Wastweet reminded him of its authenticity, that “maybe we shouldn’t shy away from the truth. We don’t have to clean it up and make it prettier than it was.”

Erik Jansen started his comments by stating he was “very, very closely with Heidi, although I don’t end up at the same place.“ He dismissed the first 3 designs, and felt that the Native American on design 4 “doesn’t look like an Indian.” He also didn’t like the depiction of the horse in design 5, finding it “childlike.” He found the perspectives as shown in design 7 visually disturbing, so that design was dismissed as well. He indicated he favored design 8 with its “natural rendering drawings.” He “loved” the Ledger designs, as “they challenged the observer to figure out what is this.” He was challenged by designs 9, 10, and 11, and design 12 to him was an attempt to “re-3D” a flat drawing: he didn’t like it for a coin, but thought it was “cool.”

Michael Olson indicated he was “very pleased with the body of work as a whole,” a first in his two years on the committee. He began his detailed comments with design 8, which he believed to be “the finest of the natural art designs,” and felt that the horses needed to remain in the background. He found the horses going in different directions in design 9 “distracting.” He liked design 10, but liked design 11 more, and agreed with Mr. Jansen that design 12 “misses the mark.” His favorite design was the thirteenth, but he felt it would work better on a silver dollar-sized coin and not the 1.03-inch dollar coins of today. He felt that the military aspect of some of the designs was a point of pride, and while they might not match well with the theme of the coin, “it certainly would not lead me to take everything out that had a spear on it.“

Donald Scarinci, attending via teleconference, commented that the designs are showing signs of progress, and he was hopeful “to see some day that our coins are on par with the award winning coins that are coming out of some of the Eastern Bloc countries.” As far as the designs for this coin, he stated he would abstain from commenting.

Dr. Doreen Bolger was next, and started right at design 8, calling it a “beautiful and very expressive design,” and among the Ledger designs she would favor designs 10 and 11, but preferred design 11. With that, she ended her comments.

Chairman Gary Marks was the final committee member to comment. He disliked design 1, wanting to see “the rest of the horse,” and he wasn’t excited about design 2 either. The figure on the horse in design 3 wouldn’t present well at the coin’s actual size, nor would design 4, although on a six-inch coin he thought the design would work well. In a similar vein, he thought that design 5 had “too much detail” and design 6 felt “somehow not complete” with its design running off of the edge of the coin. He liked the perspective in design 7, but three bison, two horses, and two human figures on an inch-wide coin “diminished the impact of the design.” Of design 8, Mr. Marks spoke “very favorably,” comparing it to the “Bella Lyon Pratt’s half-eagle of 1908 through 1929.“ He also found the use of incused, frosted, and mirrored surfaces would make this “a very attractive coin,” especially as a proof coin. He found design 10 to be “a clean image,” and thought it would also look “rather spectacular” if it were stuck as a proof coin. He felt that the “little horse and rider in the background” of design 11 would fade and “become clutter.” He also remarked on the attempt to create a 3D effect with the Ledger art in design 12, but was “not convinced that’s what the Ledger art was about.“ Lastly, he saw design 13 as “a circle of clutter,” but “a wonderful design in large size,” but not on a dollar-sized coin.

The committee members, after hearing their colleagues’ comments, further discussed the designs. To calls from Micheal Olson to remove the second horse from design 11, Heidi Wastweet responded with a reminder that they should not design by committee. Don Everhart offered up a suggestion to Chairman Marks: move and enlarge the $1 to where the second horse was in the delivered design. Both Ms. Wastweet and Chairman Marks indicated they would be in support of that change. Mike Olson expressed confusion as to changing design elements is not appropriate, but changing text is appropriate.

The committee members entered in their votes. Donald Scarinci abstained from the vote, leaving a possible 18 points for each design.

By a single vote, design 8 edged out design 11, but Erik Jansen had a question as to whether 16 votes would have been sufficient to garner the committee’s recommendation had design 8 not received 17; Chairman Marks answered in the affirmative. Heidi Wastweet then said that she was hoping one of the Ledger designs would be recommended. Mr. Jansen wanted to “talk about how close those are and to see if there are any members that want to discuss that.”

Chairman Marks called for a motion to see if there was support for making design 11 the committee’s recommendation, which Mike Olson did, but in a way that implied that Don Everhart’s suggestion, removing the second horse and moving the $1 element to its place, be implemented. Both Mr. Jansen and Ms. Wastweet seconded the motion, but she was under the impression that Mr. Everhart’s suggestion was part of the motion; Chairman Marks indicated that is was not: the motion is just to make design 11 the committee’s recommendation, and any modifications would have to be made after the first motion passed. Mr. Olson asked if changing the design elements would gain or detract from supporting the recommendation. Ms. Wastweet said she liked it either way, as did Mr. Olson. Chairman Marks said he could not support the motion, even though he thought the suggestion would salvage the design, the Native American groups did not include design 11; it did include design 8, and that design was also the recommendation of the CFA. He also warned the committee that even if the motion passed, and if a subsequent motion to implement the suggested change passed, the Mint may not implement it. He stressed that design 8 had “objects that are readily identifiable to the size of the coin that are well rendered.”

Donald Scarinci voiced his opinion, backing up Chairman Marks. He cautioned his fellow members that once they go beyond simple word changes to making design element changes, “because then you walk the path of coin design by committee, which is a horrible, horrible path.” Mr. Olson countered that it was a minor change being discussed, that they were “not sitting here reconfiguring the entire coin or the flavor of the coin.” He didn’t think there was anything wrong with design 8, and thought it would make “a fine design and if that made it onto a coin, it would be one I would want to have in my collection.” He finished by expressing his “fundamental disagreement with minor changes, that’s what our job is.” Chairman Marks called for a vote on the motion. Dr. Bolger and Mr. Olson voted yes, Mr. Jansen, Mr. Ross, Ms. Wastweet, and Chairman Marks voted no, and Mr. Scarinci continued his abstention; the motion failed, and design 8 stands as the committee’s recommendation.