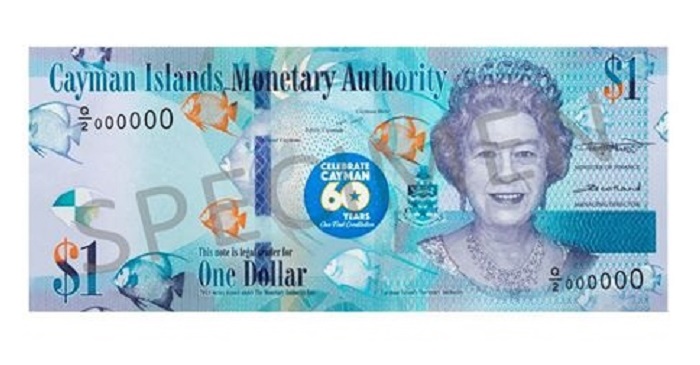 The Cayman Islands Monetary Authority and Cayman Islands government have issued (28th January) new $1 commemorative banknotes (U.S. $1.20) to mark the 60th anniversary of the Cayman Islands’ first written constitution. The banknote will be familiar to Cayman Islanders as it is a modified version of the current “D” series one-dollar banknote and also bears the commemorative Cayman 60th logo to the left of the coat of arms and the image of HM Queen Elizabeth II.

The commemoration seeks to honour Cayman Islands heroes and the men who saw the need for Cayman’s own written constitution and took the necessary steps to get the document approved by HM the Queen. 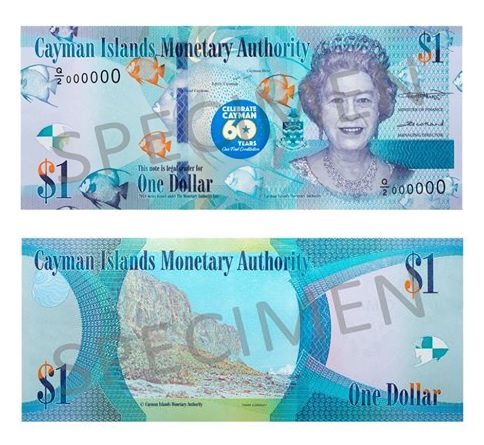 The commemorative note, issued by the Cayman Islands Monetary Authority, is the same colour and design as the existing one-dollar banknote but includes four differences or additions.

1) The addition to the CELEBRATE CAYMAN commemorative logo is situated in the centre on the face.

2) The signatures of Finance Minister Roy McTaggart and CIMA Managing Director Cindy Scotland have been relocated to the right of the Queen’s effigy.

3) The magnetic thread running from the top to the bottom of each note has been replaced with a new four-millimetre RAPID micro-optic purple security thread.

4) The serial number incorporates the prefix “Q 2,” shown divided by a horizontal dash, and is only used for special occasions such as this.

For those living in the Cayman Islands, the commemorative banknote can be acquired from CIMA’s Currency Division on the ground floor of the Government Administration Building. The note is sold at face value ($1.00) and will be placed into general circulation from the 30th January via commercial banks. For additional information about the coins and banknotes issued by the Cayman Island Monetary Authority, please visit their website.