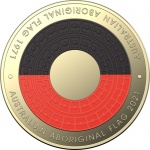 The Royal Australian Mint has released new $2 coins with colour which are in celebration of the 50th anniversary of the creation of the Aboriginal flag. Designed by Aboriginal Elder Harold Thomas, a Luritja man from Central Australia in 1971, its purpose was to create a symbol of unity and national identity for Aboriginal people […] 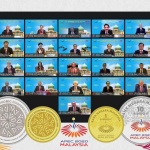 The Bank Negara Malaysia has issued (20th November) collector coins in conjunction with the hosting of the APEC summit, which was held in Kula Lumpur. The Asia-Pacific Economic Cooperation (APEC) is a regional economic forum established in 1989 to leverage the growing interdependence of the Asia-Pacific. The organisation was inaugurated with 12 member nations including […] 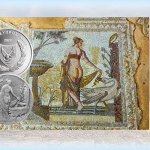 The Central Bank of Cyprus has released (9th November) new silver Proof collector coins which feature one of the country’s most well-known mosaics depicting a scene from the Greek myth Leda and the Swan.  The mosaic captures the moment Leda, wife of the king of Tindáreo Sparta, bathes in a pool near the Eurotas river, […] 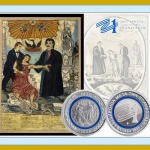 The “Greece 21” national committee organising the country’s bicentenary of independence anniversary celebrations have authorised the production of the first official medals marking the upcoming 200th anniversary of Greece’s declaration of independence. The collector’s medal inaugurates the beginning of the Medallic Program of the Commission “GREECE 2021,” which also launched the national celebrations for the […] 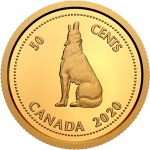 The Royal Canadian Mint has launched a six-coin set produced in gold in tribute to one of Canada’s eminent medallist and artist Alex Coleville (1920–2013). It was his legendary Centennial of Confederation coin designs issued in 1967 which became a favourite with coin collectors and gained him further acclaim. Featuring some of the country’s well-known […] 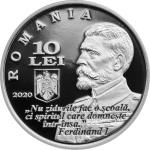 The Banca National a Romaniei has released (9th November) new silver Proof quality coins which mark the centenary anniversary of the country’s preeminent institutes of learning since its establishment. The Politehnica University of Timișoara is now one of the largest technical universities in Central and Eastern Europe.   The city of Timisoara was ceded from Hungary […] 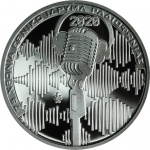 The Bank of Greece has issued (9th November) new silver collector’s coins on the occasion of the country’s 75th anniversary of the establishment of the National Radio Foundation. With the occupation by the Third Reich at an end, leftover radio transmitters and receivers were put to good use to for the formation of a national […] 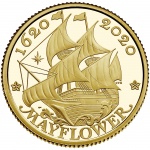 Washington — The United States Mint will accept orders for products in the United States Mint Mayflower 400th Anniversary Program beginning on November 17 at 9:00 a.m. EST. This program recognizes the 400th anniversary of the Mayflower voyage, which departed England in September 1620 and, after a tumultuous two-month journey, reached the shores of Cape Cod, […] 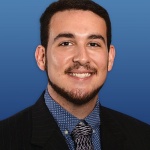 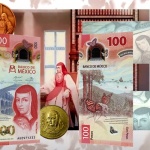 The Banco de Mexico have released (12th November) new 100-peso banknotes (U.S. $4.90) which are part of the bank’s current G series introduced in 2018. The new 100-peso banknote is the first denomination in the new G series to be printed on polymer and has undergone a completely new revised design. Featured on the new […]