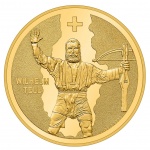 ﻿﻿ The Swiss Federal Mint have released (26th April) a new gold coin which is minted in tribute to one of the country’s most iconic personalities, whose name and image has become synonymous with Switzerland, and the legend of the struggle for political and individual freedom. Although the historical existence of William Tell is often disputed, […] 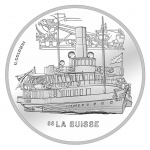 The Swiss Federal Mint have released (26th April) a new silver coin which continues with its three-part “Swiss Steamships” series started in 2017. The latest coin in the series is dedicated to the La Suisse steamship, which was first commissioned by the Sulzer brothers in 1908. The Belle Époque euphoria in Switzerland had just peaked and […] 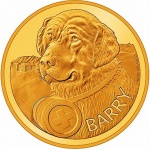 The Swiss Federal Mint have launched (14th September) a new gold coin which pays homage to the famed mountain dogs from St. Bernard (who are a familiar sight in many parts of the Alpine nation), as well as remembering the service of one particular dog—Barry. In the 11th century, Canons Regular of Saint Augustine founded […] 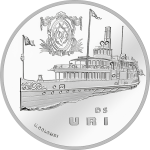 The Federal Swiss Mint have issued (4th May) a new silver coin that pays tribute to one of Switzerland’s most endearing national treasures, the Uri steamboat. The Uri is Switzerland’s oldest paddle steamer and the oldest ship in the Schiffahrtsgesellschaft des Vierwaldstattersees (SGV) company’s fleet, having embarked on its maiden voyage in 1901. What could be more […] 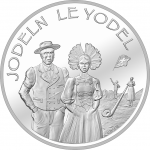 The Federal Swiss Mint have issued (4th May) a new silver coin that features one of the country’s most familiar and recognisable national activities: yodelling. The vocal skill of yodelling originated as a call from mountain to mountain; it was an effective way of communicating from one alpine farmstead to another. The original “natural” yodel […] 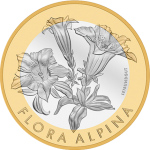 Back in January, the Swiss Mint released the second issue in its three-coin Flora Alpina (Alpine Flowers) series. Despite slipping under the radar of many English-language numismatic publications, the series has been quite popular, and the first coins, released last year and featuring the edelweiss flower, have sold out. The third and final coins will feature […] 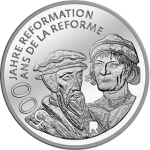 The Swiss Federal Mint launched (26th January) a new 20-franc silver coin marking “500 Years of Reformation”—the quincentennial of the Protestant Reformation, one of the most significant European events of the 16th century. The Reformation began in the small town of Wittenberg in Saxony, Germany, in 1517, with the publication of The 95 Theses. This doctrine […] 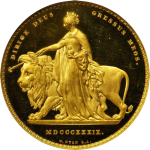 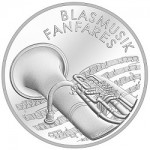 The Swiss Federal Mint has issued (26th May) a new silver collector coin paying tribute to Swiss brass bands, a quintessential tradition in the Alpine region of Europe. Although this type of music could be considered to have found its origins in Great Britain, the brass band became increasingly popular across Switzerland especially during the […] 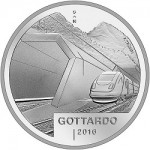 The Swiss Mint has launched (28th January) a new coin featuring the Gotthard Tunnel, an immense project of industrial and technical fortitude which required the movement of over 28 million tons of excavated rock. This perseverance and determination will be rewarded when the tunnel is declared open on June 1, 2016, 17 years after the first […]