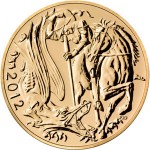 The Royal Mint, UK have launched their latest and final coin to mark the Queen’s Diamond Jubilee, the sought-after five pound gold coin piece. Equal in weight to five sovereigns, the five pound gold coin is unique for 2012 as it includes a specially commissioned reverse design of St. George slaying the dragon which marks […] 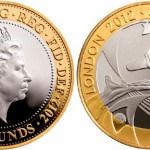 The Royal Mint has announced (16th July) the release of a new coin to mark the handover ceremony of the London 2012 Olympic Games to their next host country, Brazil and the city of Rio de Janeiro. This will represent a full circle of Olympic events captured on British coinage, the first Olympic coin – […] 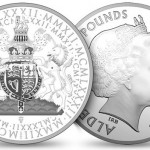 The Treasury of Alderney, Channel Islands have issued (21st June) a five-ounce silver coin which marks the 30th birthday of Prince William, Duke of Cambridge – who is second in line to the British throne. Prince William Arthur Philip Louis, the eldest son of the Prince of Wales and the late Diana, Princess of Wales […] 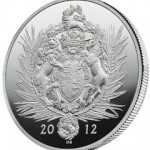 The Royal Mint have officially launched (25th May) their latest contributions to the national and international celebrations of the Queen’s Diamond Jubilee celebrations, set to commence from the 2nd June. The gold and silver coins, weighing in at one kilo each, are part of an overall series of coins issued to celebrate this momentous British […] 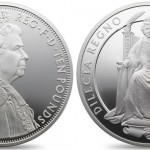 The Royal Mint have launched (11th May) both gold and silver coins with a weight of five ounces which celebrate the 60th year of reign or Diamond Jubilee of H.M. Queen Elizabeth II who ascended the British throne in 1952. These are the first and only coins of this weight to mark this auspicious occasion. […] 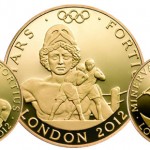 The Royal Mint has launched (30th April) their third and final Olympic three coin gold series, which is inspired by the Olympic motto “Citius, Altius, Fortius” (Faster, Higher, Stronger). The last series is dedicated to “Stronger” which now completes the series. The three coin gold set consists of a one ounce coin with a face […] 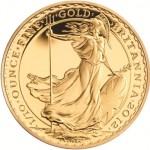 The Royal Mint have launched (3rd April) the proof editions of the hugely successful and popular “Britannia” coins, which also mark the 25th anniversary for the proof strike issue that made its debut in 1987 with one ounce and fractional 1/2, 1/4, and 1/10th ounce gold coins. A silver companion piece was added to the range […] 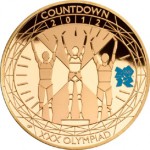 The Royal Mint have launched (5th March) the final “countdown” £5 crown coin entitled “Games Time” in gold, silver, and silver piedfort. The innovative Olympic coin series, involving the issue of one coin with the numeral before the actual games was first introduced in 2009 with the numeral “3” and a contemporary design depicting one […] 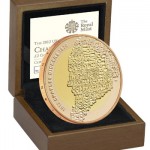 The Royal Mint have launched (24th February) the precious metal versions of the hugely popular Charles Dickens £2 coin, which was issued for the 200th anniversary of the author’s birth. The coin, designed by Graphic artist Matthew Dent (who designed the reverse of the current “coat of arms” British circulation coins), includes much-loved titles and […] 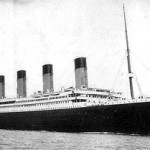 The Treasury of the Government of Alderney have launched (4th February) a crown coin marking the 100th anniversary of the maiden voyage of HMS Titanic, the White Star Line luxury liner, which was considered unsinkable. The passenger liner with 2,223 passengers set sail from Southampton on the 10th April 1912 destined for New York, but […]