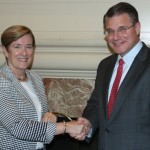 The United States Mint has announced the appointment of Mary N. Lannin to the Citizens Coinage Advisory Committee (CCAC). Ms. Lannin was appointed based on the recommendation of House Democratic Leader Nancy Pelosi and will serve for a statutory term of four years. A well-known freelance editor, Ms. Lannin has worked on various numismatic papers and […] 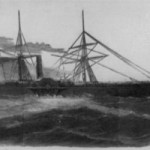 Federal court motions claiming misappropriation and trespass were filed on Thursday, May 15, 2014, against a Florida salvage company by the Ohio-based group that first discovered and recovered Gold Rush-era sunken treasure from the S.S. Central America, the fabled “Ship of Gold” that sank in 1857. Columbus-America Discovery Group (CADG) claims that Odyssey Marine Exploration, […] 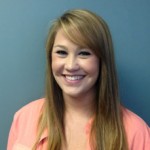 Tara Crosby, a 20-year-old college student from Alpharetta, Georgia, is the recipient of the Professional Numismatists Guild 2014 Young Numismatist Scholarship. She will have the opportunity to attend one of the two week-long American Numismatic Association 2014 Summer Seminar sessions courtesy of PNG. Crosby was introduced to coins by her family at an early age […] 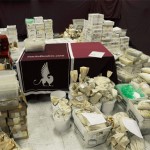 Stack’s Bowers Galleries has announced the acquisition of one of the greatest American coin hoards ever discovered. Known as the “Stack’s West 57th Street Collection,” it includes more than one million coins. The market value is estimated to be well into eight figures, with initial estimates ranging from $15 to $20 million. The contents of […] 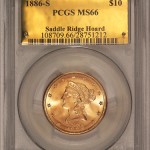 Professional Coin Grading Service (www.PCGS.com) has authenticated and graded a hoard of 1,427 19th century U.S. gold coins that were discovered in eight, decaying metal canisters buried on private property in California’s gold country. The coins, which are dated from 1847 to 1894 and have a combined face value of $27,980, are estimated to be valued […] 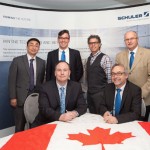 The Royal Canadian Mint has ordered two minting presses from Schuler for its production facility in Winnipeg. The contract for the two MRV 150 lines was sealed at the World Money Fair held in Berlin in early February. The machines are to be put into operation in the current year and will be used to […] 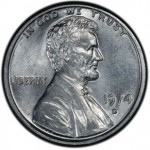 The first confirmed example of a 1974 Lincoln Cent struck in aluminum at the Denver Mint will be displayed by Heritage Auctions (www.HA.com) at the upcoming Long Beach Coin, Currency, Stamp & Sports Collectible Expo, held January 30 – February 1, 2014.  The coin will then will be offered as one of the highlights of […] 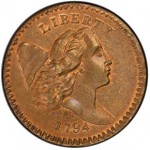 The finest and only complete collection of United States Half Cents, comprising 228 coins with a combined face value of $1.14, realized $18,259,269 including buyer’s premium when sold at auction on January 26, 2014. The “Missouri Cabinet Collection” is the current and all time finest United States Half Cent collection in the PCGS Set Registry. […] 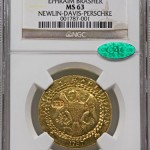 The Newlin-Davis-Perschke specimen 1787 Brasher Doubloon will be offered by Heritage Auctions at the 2014 Florida United Numismatists Convention in Orlando. The rare American gold coin has been seen in public relatively few times since Chicago coin dealer Walter Perschke purchased it in 1979 for a then-record $430,000. It is graded NGC MS  63 with […] 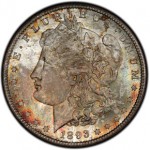 Professional Coin Grading Service (PCGS) will host the first East Coast public display of the superb, multi-million dollar Coronet Collection, the finest current Morgan Dollars Basic Set, Circulation Strikes (1878-1921), in the PCGS Set Registry® (http://www.pcgs.com/setregistry). The entire collection of 97 coins with a weighted grade point average of 66.38 will be exhibited at the […]