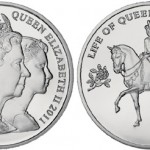 The British Virgin Islands Government have announced (18th April) the issue of a collector’s coin to celebrate the 85th birthday of HM Queen Elizabeth II. The coin is struck by the Pobjoy Mint in the United Kingdom and is issued in conjunction with the Queen’s actual birthday, the 21st April. The Queen observes her official […]