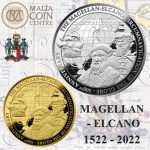 The Central Bank of Malta has released new gold and silver collector coins marking the quincentenary anniversary of the first circumnavigation of the globe which concluded in 1522. The expedition was led by the famed Portuguese navigator Ferdinand Magellan, who was charged with finding a Spanish route to the Moluccas. He was killed on Mactan […] 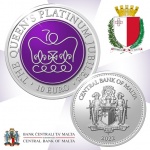 The Bank of Malta has launched their latest collector coins which are in celebration of the Platinum Jubilee, the 70th anniversary of the accession of HM Queen Elizabeth II. Since before her accession to the British throne in 1952, Queen Elizabeth II has maintained a very special and personal bond with Malta. Apart from the […] 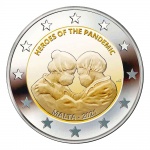 The Central Bank of Malta launched (29th July) new commemorative €2 coins which are in tribute to Malta’s health sector during the COVID-19 pandemic, especially to the frontline medical professionals. The new coins are a symbol of national appreciation of the selfless effort and dedication of the many individuals in Malta who have been at […] 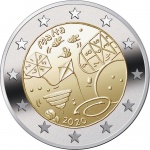 The Bank of Malta has issued (14th December) their fifth and final €2 commemorative coin which is part of a current coin series entitled “From Children in Solidarity.” The initiative is a project between the Central Bank of Malta, the Ministry for Education and Employment, and the Malta Community Chest Fund that is a charitable […]

The Central Bank of Malta has issued (8th May) gold and silver Proof coins, which are part of a Europe-wide numismatic programme featuring various annual topics and events. This year, the Five Ages of Europe series continues with the focus being on the Gothic era. The period is divided into Early Gothic (1150-1250), High Gothic […]

The Central Bank of Malta has announced they will issue, on the 22nd July, the fourth commemorative €2 coin in a series of seven dedicated to the Maltese islands’ prehistoric sites which are on the UNESCO World Heritage list. The featured site for 2019 is the Ta’ Hagrat, an ancient temple in Malta, along with […]

The Central Bank of Malta has issued (4th June) new silver collector coins to mark an event in Maltese history remembered as an essential step to self-rule and eventual independence. The day is remembered on the 6th June, when, in 1919, four Maltese nationals died when fired upon by British soldiers. Despite the nearly 200 […]

The Central Bank of Malta has announced that on the 15th March, they will issue numismatic coins in gold and silver depicting the Order of St. John’s Gran Carracca Sant’Anna. The coins are issued under the Europa Programme and bear the Europa Star logo. The carrack was one of the most influential ship designs of […] 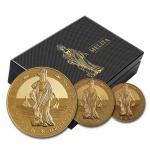 The Central Bank of Malta, in collaboration with the Lombard Bank Malta Plc., have launched (30th November) a new range of gold bullion coins which carry both the name and allegorical image of “Melita.” The gold coins are struck by the PAMP Mint of Switzerland and will be issued in three denominations and weights: A […] 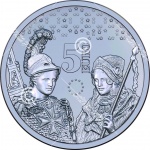 The Central Bank of Malta issued a numismatic commemorative coin on May 9 to celebrate the 10-year anniversary of Malta’s adoption of the euro currency. This coin was struck by the Royal Dutch Mint in Brilliant Uncirculated cupro-nickel and has a limited mintage of just 2,000. The coin weighs 15.5 grams and has a diameter […]