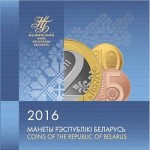 The National Bank of Belarus has announced that it will begin circulating its first-ever series of coins from July 1 of this year. The coins are meant to accompany a new series of bank notes that will see the Belorussian currency lose four zeros from the current system, which at current rates is exchanged at nearly 20,000 […]