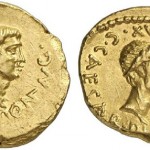 For those of you who are ardent fans of the 1970’s British television series series “I Claudius” or the latest HBO series “Rome”, you will be well acquainted with Gaius Octavius Thurinus, the great-nephew of Gaius Julius Caeser who through inheritance, skill and intelligence succeeded Caesar and was himself elected as Augustus, first Emperor of […]