The United States Mint has started accepting orders for the third release of the year within the First Spouse Gold Coin series. The latest coin features Caroline Harrison, the wife of the 23rd President Benjamin Harrison. 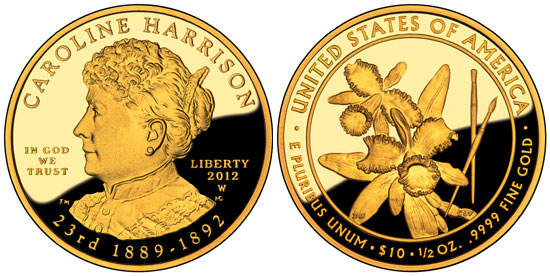 During her time as First Lady, Caroline Harrison secured appropriations from Congress to renovate the White House and oversaw the project to perform the improvements which included installing electricity. She raised the first Christmas tree in the White House and introduced the use of orchids as the official floral decoration at receptions. She also conducted china-painting classes for other women. She died  on October 25, 1892 while her husband was still in office.

The obverse of the Caroline Harrison First Spouse Gold Coin features a left facing portrait of the First Lady. The inscriptions include her name, the motto “In God We Trust”, “Liberty”, “2012 W”, “23rd”, and “1889-1892”. The reverse of the coin features a depiction of orchids and paintbrushes. Inscriptions include “United States of America”, the motto “E Pluribus Unum”, “$10”, and the precious metal weight and purity.

Proof and uncirculated versions of the coin are available with a maximum mintage of 13,000 pieces established. The ratio of proof to uncirculated coins will be determined based on customer orders. There are no household ordering limits imposed.