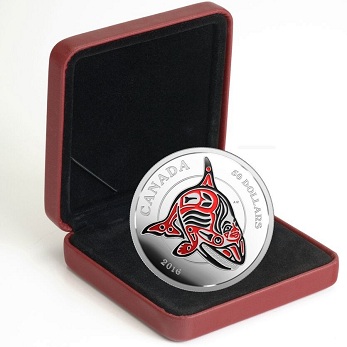 The Royal Canadian Mint has launched two new coins highlighting the unique folklore and artistic style of the Haida, a people indigenous to Canada.

Haida Gwaii, translated simply as “Islands of the Haida people,” is an archipelago of islands on the North Coast of British Columbia, formerly known as the Queen Charlotte Islands.  The new coins are part of a series that portrays three supernatural beings important to Haida culture, each respectively representing the realms of water, earth, and sky.

Haida society continues to be engaged in the production of a robust and highly stylized art form. Few components of Northwest Coast art are more noteworthy and internationally recognized than large wooden carvings or totem poles. Chilkat weaving and ornate jewellery are also gaining notoriety, transitioning rapidly into works of popular expression such as Haida manga.

The coins feature the clan’s interpretation of the orca whale, considered the most powerful supernatural being of the undersea realm. The orca is interwoven with the S`Gaana Jaad (Killer Whale Woman), who according to Haida legend is a noble matriarch. 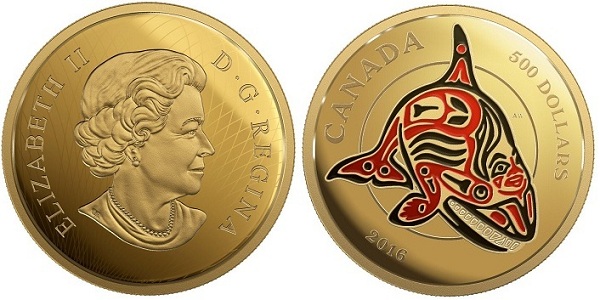 The coins are designed by Haida artist April White. The reverse of both the gold and silver issues bear an eye-catching image of an orca leaping out of the water. A female form is visible beneath the orca “cloak,” using her arms and legs in the orca’s fins and tail to propel herself forward. Her shoulder is situated directly beneath the orca’s eye, and her black hair is flowing along its back, doubling as the orca’s black ribs. The circular outline of the design represents the full moon. 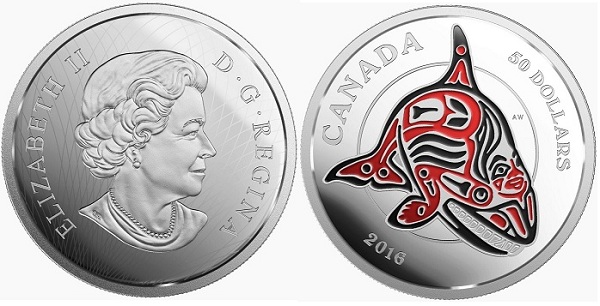 The obverse of each coin depicts the denomination and current definitive portrait of HM Queen Elizabeth II, as designed by Canadian artist Susanna Blunt. The image has been used on all Canadian circulation and several commemorative coins since 2003.

The silver coin is the first issue in the 3-coin set showcasing Haida art and culture; the gold coin is available as a separate item. Forthcoming coins in the series will include depictions of the Bear and the Eagle.

For more information on this new series and other coins offered by the Royal Canadian Mint, please visit their Web site. Information is offered in English and French, with international orders dispatched where applicable.