The Royal Canadian Mint has unveiled two collector coins issued for the wedding of Prince William and Catherine Middleton, which will take place on April 29, 2011. The first coin is struck in .9999 fine silver and includes a sapphire colored crystal, while the second is a 25 cent coin featuring a color photo reproduction of the couple. 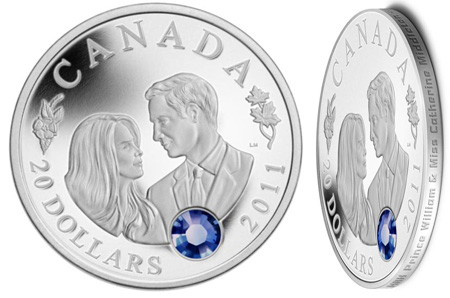 The $20 silver coin features a portrait of the newly engaged couple, designed by Laurie McGaw of Guelph, Ontario and engraved by Mint Engraver Jose Osio. Surrounding the portrait are the inscriptions “CANADA”, “20 DOLLARS”, “2011”. Maples leaves and trilliums accent the design, along with a sapphire colored crystal reminiscent of the sapphire and diamond engagement ring that Price William presented to his fiancee. The ring once belonged to his mother Diana, Princess of Wales.

The obverse of the coin carries the effigy of Queen Elizabeth II, created by Susanna Blunt in 2003. 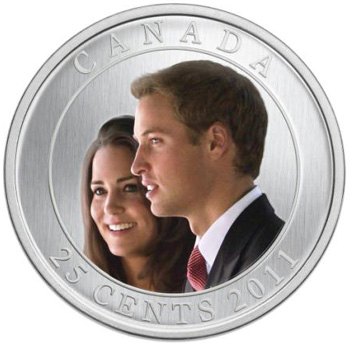 The 25 cent collector coin features a larger than usual diameter of 35 mm with a serrated edge. The coins are struck in nickel plated steel and include a colored photo reproduction of the couple based on a photograph by Chiara Hunt in Salzburg Austria. Inscriptions around the image include “CANADA”, “25 CENTS” and “2011”.

The obverse includes the effigy of Queen Elizabeth II by Susanna Blunt.

Packaged in a folder with other photographs of Prince William and Catherine Middleton, the coins are priced at $25.95 CAD and offered without a mintage limit.

Both collector coins can be purchased from the Royal Canadian Mint at www.mint.ca