The Royal Canadian Mint have launched a new version of the well-known “loonie”, the Canadian dollar coin which has been in circulation for the last 25 years. The added element of this new coin is that it is issued to mark the upcoming Olympic games hosted in London and has been dubbed “the Lucky Loonie”.

The coin is issued as a tribute to the athletes participating in the Olympic and Paralympic games, which begin in July. The coin is in keeping alive the recent tradition of wishing Canada’s athletes good luck with special collector and circulation versions of the iconic one-dollar coins. 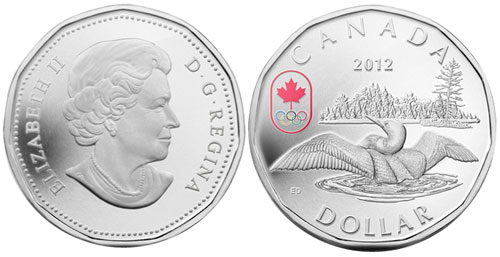 The reverse design is specially commissioned for the Olympic event and is the work of Canadian artist Emily S. Damstra. The depiction shows a rear view of the Common Loon as it spreads its wings in a territorial display. As it ripples the lake’s waters, the loon faces a lake shore densely wooded with the Canadian boreal forest’s mix of evergreen and indigenous trees. The reverse design is also enhanced by a painted Canadian Olympic Team logo comprising of the five Olympic color rings and a maple leaf. The obverse includes the current portrait of HM Queen Elizabeth II which was designed by Susanna Blunt and in use since 2003.

For more information on this and other coins offered by the Royal Canadian Mint, please visit their website at: http://www.mint.ca/store/coin/lucky-loonie-1-fine-silver-coin-2012-prod1350002