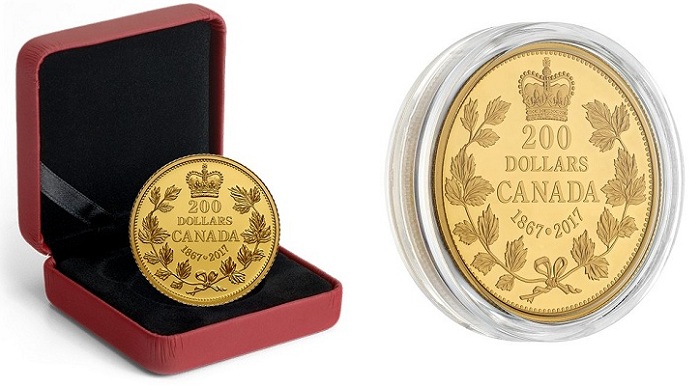 The Royal Canadian Mint (R.C.M.) has issued one of its first coins in celebration of the country’s eagerly awaited 150th anniversary of confederation, which occurs in July of next year. The R.C.M. is sure to play a significant role in these commemorations, which will see the issue of a series of commemorative reverse-design circulation coins in honor of this milestone occasion.

Canadian confederation began with a conference called by the British Colonial Office and was scheduled for September 1, 1864, in Charlottetown, Prince Edward Island. The purpose was to consider a union of confederation between the Canadian territories, then all separate provinces or colonies.

Just a few weeks after what was later referred to as the Charlottetown Conference, delegates met in Quebec City for the Quebec Conference, where the Seventy-Two Resolutions — which would later form Canada’s overall government — were agreed to. On March 8, the British North America Act, which would later emerge to serve as the cornerstone of Canada’s constitution, passed the British House of Commons, as it had previously passed the House of Lords. Queen Victoria, who would continue to serve as head of state of the new confederation, gave the bill Royal Assent on March 29, 1867, with the newly created Dominion of Canada coming into official existence on July 1, with Sir John Alexander MacDonald serving as the new country’s first Prime Minister.

There was some correspondence between the size of Canadian coins and the British coins of similar value these coins replaced. For example, the large Canadian penny was identical in size and value to the contemporary British half-penny, which was 25.4 mm. Likewise, the Canadian 25-cent coin was virtually identical in size and value to one British shilling, equal in value to 12 British pence or about 24 Canadian cents. However, there was also a correlation to the value of the American dollar, due to an influx of American silver.

The designs of the silver coins were standardized with the effigy of Queen Victoria on the obverse, and the value, date, and a crowned maple wreath appearing on the reverse. In the case of the one-cent coin, the reverse depicted a maple vine circlet. 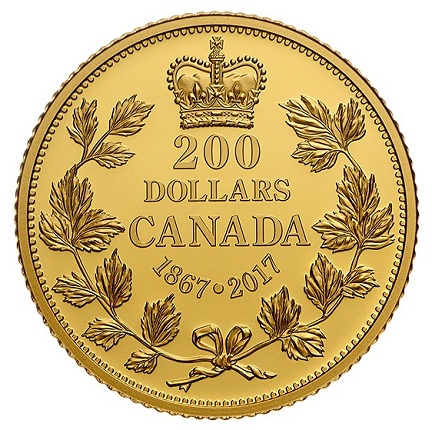 The commemorative gold coin in celebration of the 150th anniversary of confederation looks to the early designs of Canadian coinage for inspiration, which were originally issued in 1870. Bound together by a bow at the bottom of the reverse, two crossed maple boughs gently curve upward along the coin’s perimeter.  Twenty-one maple leaves lead the eye toward a current creation of the Royal Crown (St. Edward’s Crown) at the very top. The reverse’s text elements note the face value of 200 DOLLARS, the word CANADA, and the commemorative dates, 1867-2017, all of which are engraved in a similar font and layout to the original Confederation-era coin designs. 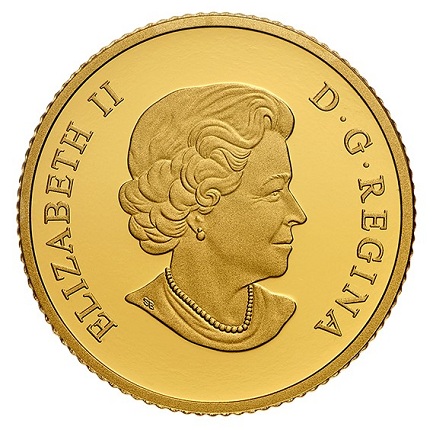 The obverse side includes the effigy of HM Queen Elizabeth II as designed by Canadian artist Susanna Blunt, which has been used on all Canadian circulation coins and many commemorative issues since 2003.

For more information on this and other coins offered by the Royal Canadian Mint, please visit their Web site.