The Royal Canadian Mint have launched the third coin in their very popular “Banknotes of Canada” series which began early last year. The latest coin features a re-creation of the stunning portrait of a lion taken from an early twentieth century vignette created by the British American Banknote Company.

The banknote in question and of outstanding design was the 50 Dollar note issued in 1908 by the Northern Crown Bank. The Northern Crown Bank, a commercial financial institution originating in Winnipeg, Manitoba began operations in 1908 when The Northern Bank and The Crown Bank of Canada were merged. The resulting bank would ultimately be bought out by The Royal Bank of Canada in July 1918. Like many privately owned and commercial banks of the time, it issued its own currency – often very colorful notes and with artistic merit now widely collected and admired for their detailed and classic designs. 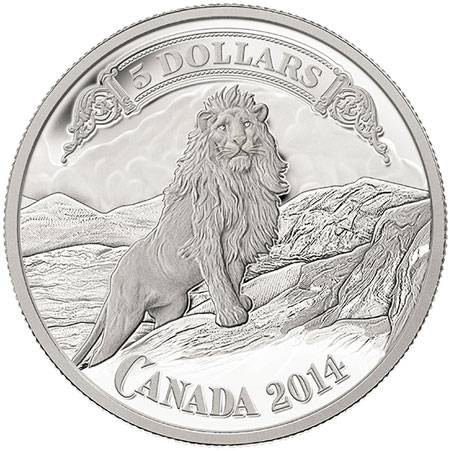 The reverse of the coin sees the King of the Jungle being brought to life in painstaking detail as Royal Canadian Mint engravers capture the characteristic line engraving of early banknote design. The obverse includes the current portrait of HM Queen Elizabeth II which is used on all Canadian coins since 2003, the portrait is the work of Susanna Blunt.

The first coin the Banknote series and featured a design of a seascape-themed vignette from the Canadian Bank of Commerce’s 1888 20-dollar bank note. The 2013 design centered on a youthful figure: possibly a young Hermès, who was a god of the Greek pantheon and a patron of travelers. The second coin, also issued in 2013 featured part of the vignette that appeared on the $5 bank note issued in 1859 by the short-lived Bank of Western Canada. A depiction of Saint George slaying the dragon was the primary design.