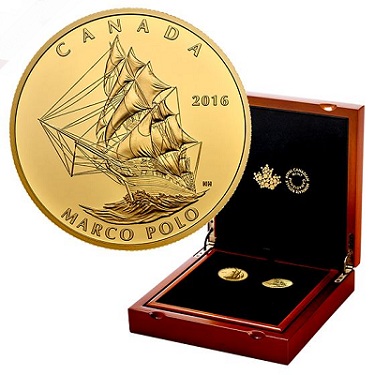 The Royal Canadian Mint has launched the second coin in a series featuring some of the Canada’s most legendary tall ships. The new issue highlights the Marco Polo, an impressive three-masted wooden clipper ship first launched in 1851 at Saint John, New Brunswick. The ship’s reputation was enhanced when in the summer of 1852 the Marco Polo sailed from Saint John to Liverpool, England, with a consignment of timber and made the crossing in the record-breaking time of 15 days and three hours.

In 1852, the ship was purchased by the Black Ball Line and converted for passenger service between England and Australia, taking it out of Canadian service. Thereafter, the Marco Polo set sail from Liverpool to Port Phillip, Australia, and made the journey in 76 days. After spending three weeks in port, it returned to Liverpool in another 76 days. The total trip time was 5 months 21 days, making this the first recorded round trip in less than 6 months – then, an astonishing feat in maritime travel. 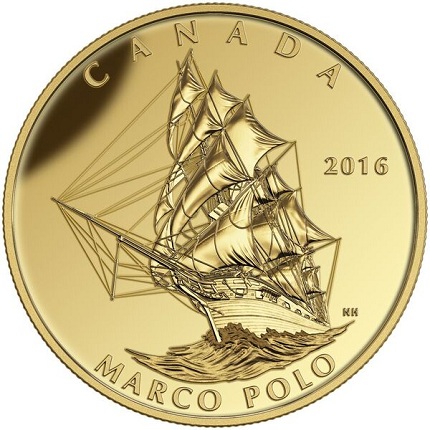 It is worth noting that one in every twenty Australians can trace his or her roots to ancestors arriving via the Marco Polo. On one occasion, fate stepped in and almost ended the maritime career of the ship when in March of 1861 a collision with an iceberg north of Cape Horn necessitated an emergency docking in Valparaiso as the ship was leaking badly. After needed repairs, the Marco Polo continued to Liverpool, and by 1867 the ship was converted back to cargo use.

The end was fast approaching for the Marco Polo, however. On a voyage from Quebec on July 25, 1883, she sprang a leak just north of Prince Edward Island. Her pumps were unable to hold back the water so her crew was grounded on a beach at Cavendish, Prince Edward Island, and her masts were cut down to prevent the wind from blowing the ship further onshore. Sadly, the following month one very strong gust of wind caused her to break up, thus ending a distinguished service to Canada, the UK, and Australia. In recognition of the part played by the Marco Polo in Canadian maritime history, the site of the wreck in the waters immediately offshore from Prince Edward Island National Park is considered a Canadian National Historic Site.

Canadian artist Neil Hamelin designed the new coin, as well as the first coin in this series. The reverse side features a beautiful and detailed depiction of what the Marco Polo would have looked like to a spectator passing by in another ship, sailing on the open seas. 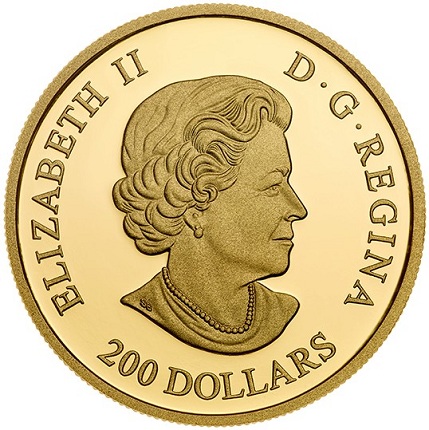 The obverse side includes an effigy of HM Queen Elizabeth II designed by Susanna Blunt; it has been used on all Canadian circulation coins and many commemorative issues since 2003. The denomination of 200 DOLLARS is also included near the rim.

Marco Polo is the second release in a four-coin series. The first featured the Bluenose; the third, featuring the Amazon, will be released in August of this year, while the HMS Discovery will be issued in October. A custom wooden presentation case to display all four coins is also included.

The Marco Polo coin will dispatch this month and is available by subscription. For more information on this and other coins offered by the Royal Canadian Mint, please visit their Web site. Subscriptions for this series are available to both Canadian and US addresses only.