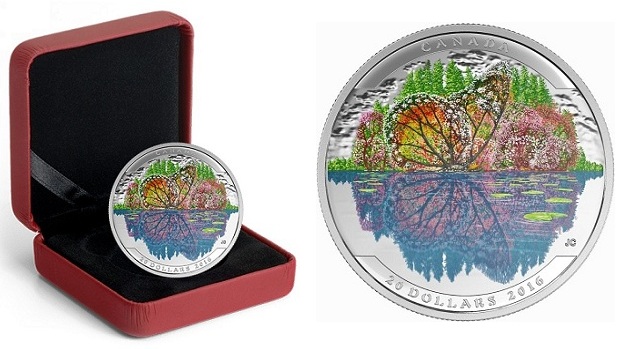 The Royal Canadian mint has released the second silver and color coin in its “Landscape Illusions” series, which uses technology and production techniques to create clever optical illusions featuring Canada’s indigenous animals and their environs.

The new coin features a monarch butterfly, or Danaus plexippus. Considered to be the most beautiful of all butterflies, they are widely regarded and admired for their size and varying colors. They are sometimes referred to as the “king” of the butterflies, hence their reference as “monarch.” 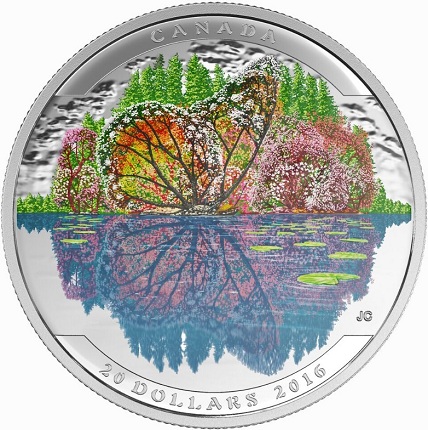 As with the first coin in this series, the reverse side is designed by Canadian artist Julius T. Csotonyi, who employs vivid color to depict a springtime scene while also utilizing traditional relief and surface. Upon closer inspection of this design, the monarch butterfly is emerging from the scene of flowering dogwood and black plum trees that rise above the waters of a lake. One wing lies outstretched among the branches while the other is a reflection on the water. Nearby, a northern map turtle lingers, providing the perfect shape for the butterfly’s body and eye. 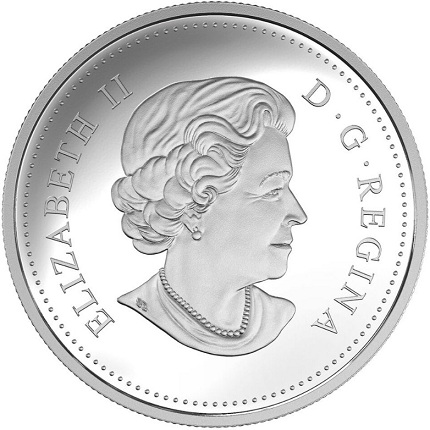 The obverse side includes an effigy of HM Queen Elizabeth II designed by Susanna Blunt; it has been used on all Canadian circulation coins and many commemorative issues since 2003.

This coin is part of an overall five-coin subscription series; it can also be purchased separately in RCM retail shops in Ottawa, Vancouver, and Winnipeg. The third coin will feature a salmon and is due to be issued in July; the fourth coin featuring a Pronghorn Antelope is scheduled for release in September; and the remaining issue, carrying an image of a Snowy Owl, will be issued in November.

For more information on this and additional coins offered by the Royal Canadian Mint, please visit their Web site. Dispatch of this coin is limited to Canadian and American addresses only.