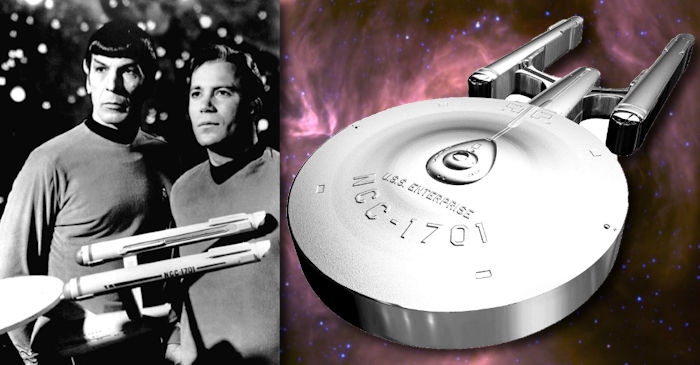 The Royal Canadian Mint have released a new silver coin which is in itself a first-ever, more a replica model rather than a coin with a traditional surface struck with a relief finish. Arguably one of the most famous starships of all, Star Trek’s celebrated USS Enterprise NCC-1701 is instantly recognizable by the rounded saucer shape and nacelles. This fictional spacecraft has a worldwide following all its own: the “Trekkies” (ardent followers of the television series) who have become experts on Star Trek and on the now-immortal crew who “boldly go where no man has gone before.”

Originally airing on the American NBC Television network in September 1966, Star Trek was not the instant hit many later Trekkies and several actors believed it had been. It wasn’t until the second series that the space-travelling crew of the USS Enterprise literally took off with the public, who went along every week while the starship Enterprise travelled through the Milky Way galaxy. The show was set roughly during the decade of the 2260’s. 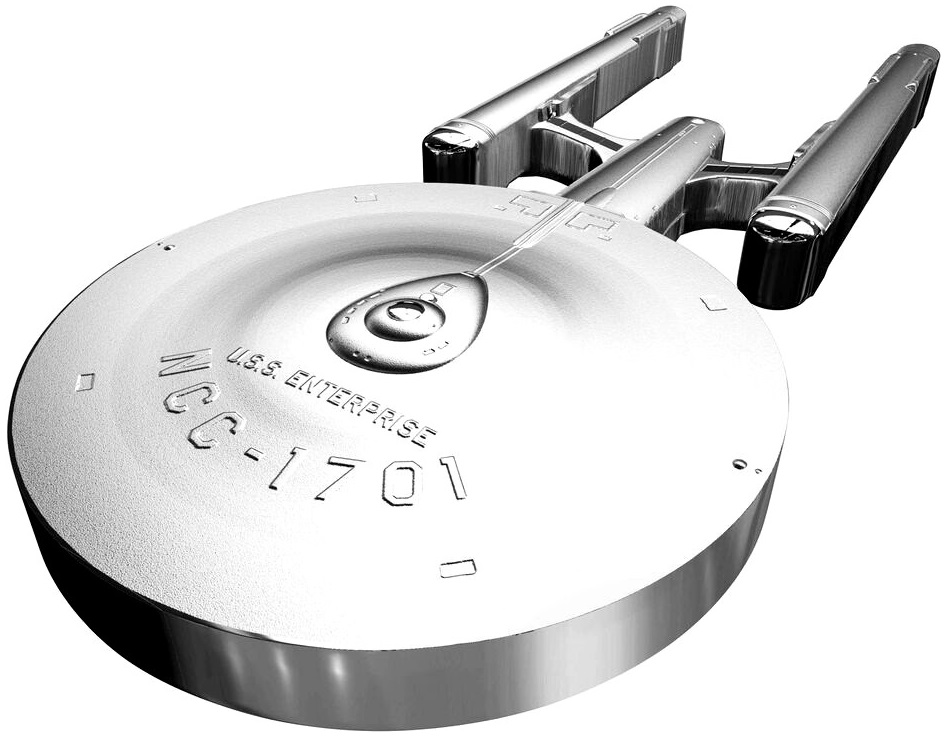 The USS Enterprise’s fictional crew was headed by Captain James “Jim” Tiberius Kirk, who was born in the year 2233. Mr. Spock, the first officer who was half-human and half-Vulcan — a fictional race of aliens with distinctive pointed ears — often clashed with the commands or emotions of the hot-headed Captain Kirk. The ship’s crew also included a chief medical officer by the name of Dr. Leonard McCoy, Lieutenant Commander Montgomery “Scotty” Scott, a chief engineer, a second officer, Lieutenant Nyota Uhura, a female communications officer, and Lieutenant Hikaru Sulu, the helmsman — all of whom developed their own unique fan following. But for many, it was the starship Enterprise itself which stole the show. The deck (or bridge) of the Enterprise is where much of the dialogue and action occurred, it is also where the transporters “beamed” down the pioneering space travellers to a variety of often hostile environments, punctuated by the occasional pleasant or engaging situations for Kirk and Spock. The exterior of the spaceship was truly spectacular, so much so that it even attracted the attention of the North American Space Agency (NASA) for its innovative design and perceived speed at a time when the space race between the USA and USSR was in full swing. 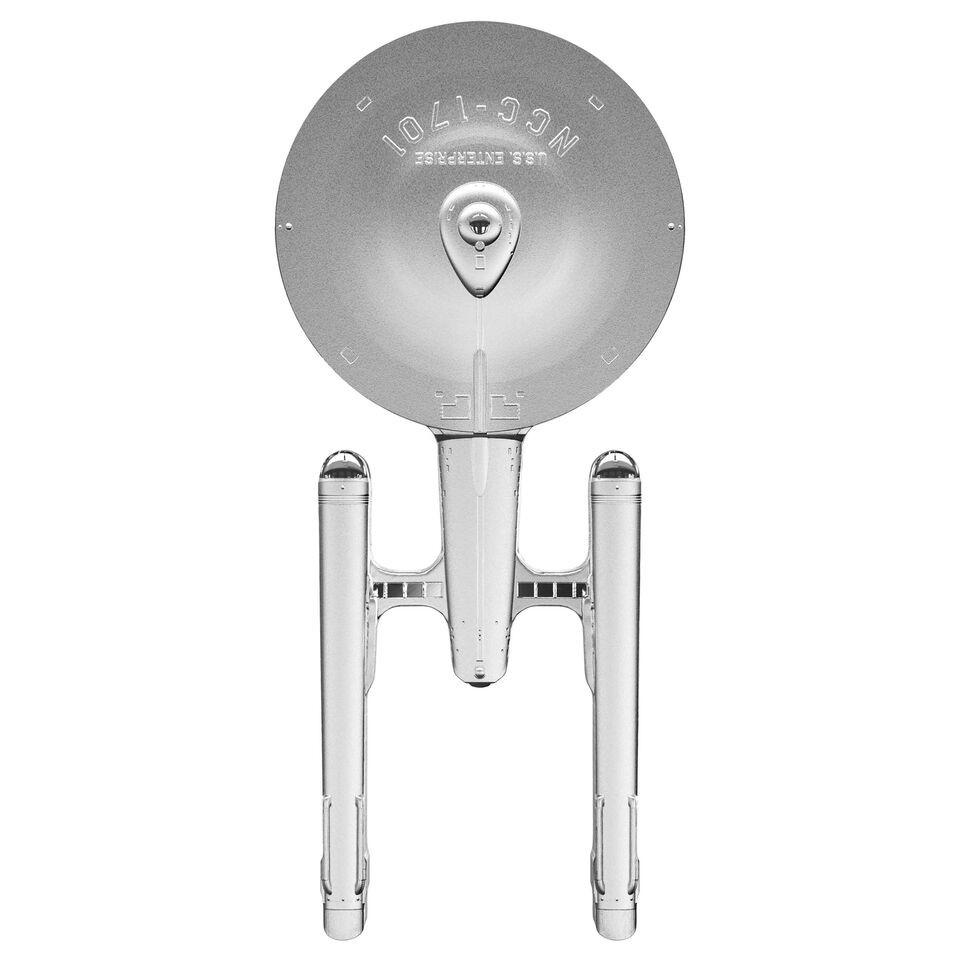 This exceptional coin includes precision detailed engraving which re-creates many of vessel’s features, including the ship’s registry code and name on the reverse. The overhead view offers a unique perspective of the main bridge that sits atop the saucer section. 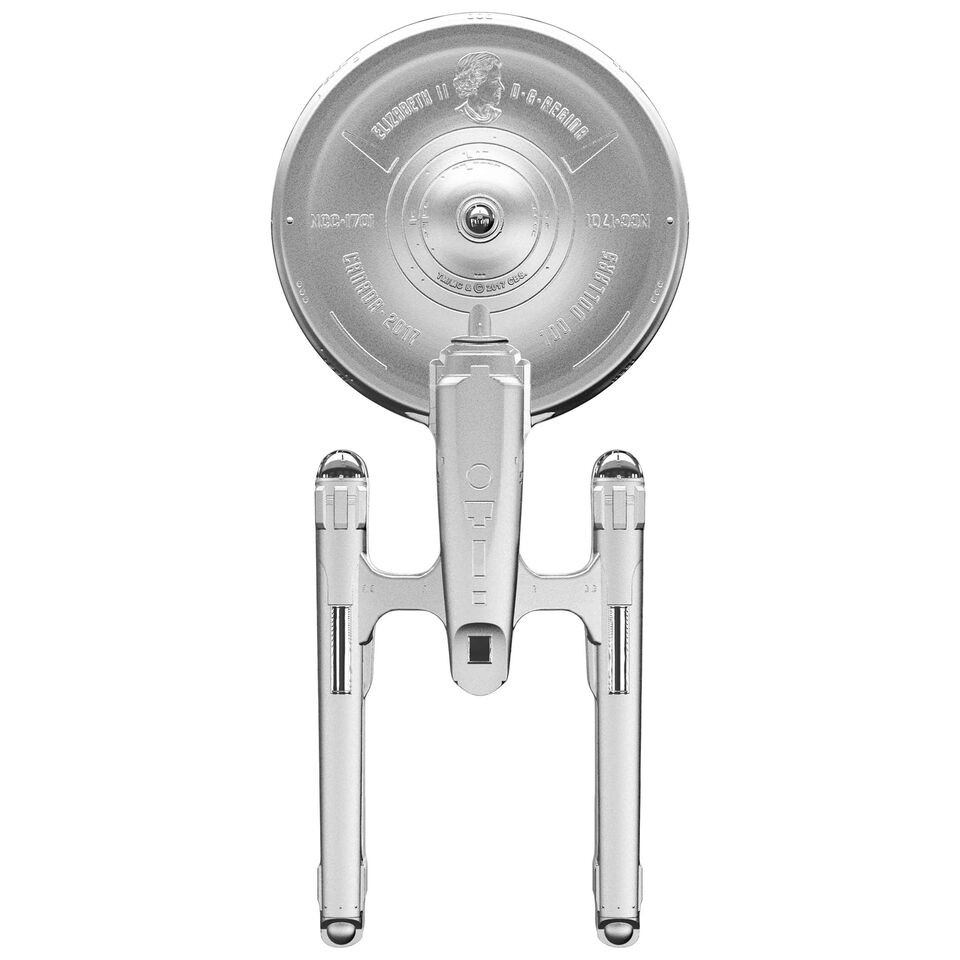 Engraved elements also add dimension to the rounded shape of the warp nacelles that extend out from the secondary hull, particularly on the obverse, where the underside view allows a glimpse of the deflector (sensor) dish and twin phasors on the undercarriage. The obverse features the effigy of Her Majesty Queen Elizabeth II by Susanna Blunt, along with the ship’s registry code, the word CANADA, the year 2017, and the face value of 100 DOLLARS, all engraved in a Star Trek font. 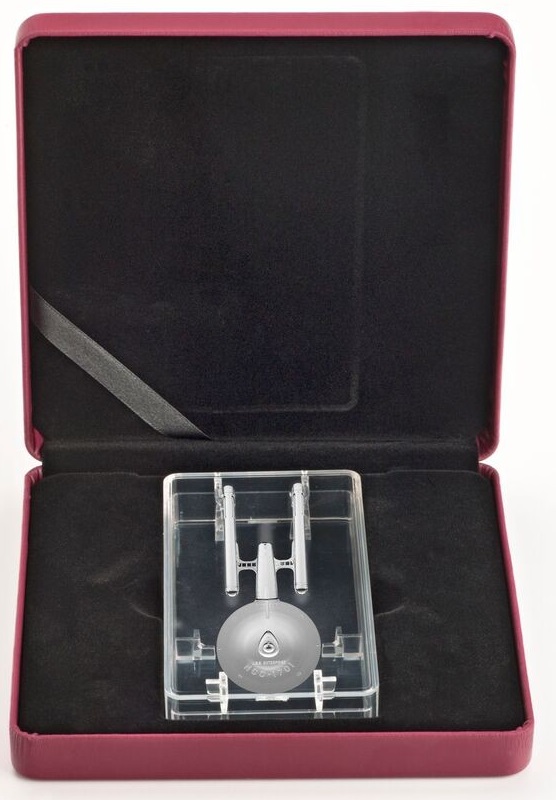 Each coin is struck from a single silver blank weighing in at 10 ounces to re-create the unmistakable outline of this famous saucer-shaped starship.  The coin is encapsulated and presented in a Royal Canadian Mint–branded, maroon-coloured custom case with a protective outer box.  The starship also includes a numbered certificate of authenticity, starting at “0001.” For additional information on this and other coins released by the Royal Canadian Mint, please visit their website.