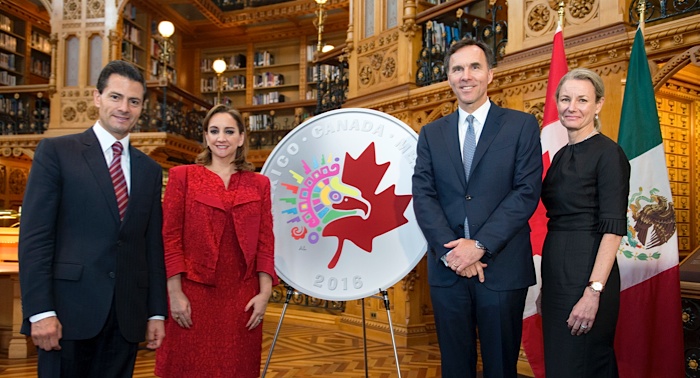 The Royal Canadian Mint has shared the following press release:

“For more than 70 years, Canada and Mexico’s multi-faceted relationship has been characterized by deep people-to-people ties, rich cultural connections and growing trade and investment, whose importance has been fittingly recognized through an expertly crafted Royal Canadian medallion,” said Minister Morneau. “As we continue to nurture our common bonds as North Americans, the Government of Canada looks forward to celebrating even more milestones in the Canada-Mexico partnership in the future.”

“As the sharing of technology and innovation between Casa de Moneda de México and the Royal Canadian Mint continues to grow, the Mint is keenly aware of the mutual benefits of engaging with our Mexican counterparts,” said Ms. Hanington. “We are proud to have created a commemorative medallion which symbolizes the many common bonds between Canada and Mexico which are paving the way for future cooperation.”

The Royal Canadian Mint’s 99.99% fine silver commemorative medallion, of which only 200 have been struck to commemorate this special occasion, illustrates the theme of people being brought together by the common good of cooperation and an open embrace of cultural respect. Designed by Canadian artist Andrew Lewis of London, Ontario and painted in vibrant colour, the medallion features the renowned symbols of the flags of Mexico (the eagle) and Canada (the maple leaf).

The Royal Canadian Mint’s long and proud history with Casa de Moneda de México is one of many examples of Canada’s deep relationship with Mexico. Together, these mints have partnered for export success and have maintained ongoing technical exchanges resulting in continuous innovation for both institutions and a strong commercial relationship.

About the Royal Canadian Mint The Royal Canadian Mint is a commercial Crown corporation, wholly owned by the Government of Canada, which is responsible for the production of all circulation coins used in Canada and for the management of the supporting distribution system. Founded in 1908, the Royal Canadian Mint has become one the world’s foremost producers of circulation, collector and bullion investment coins. Recognized as one of the most modern mints in the world, its coins are recognized internationally for their quality and technological innovation. For more information on the Mint, its products and services, visit www.mint.ca.