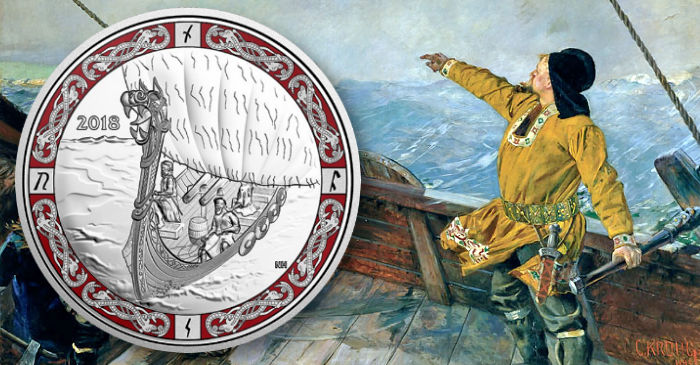 The Royal Canadian Mint has released (6th March) the final silver coins that are part of their three-coin series entitled “Norse Figureheads” which focuses on the connection with North America and early Viking explorations. The coins also focus on the ships with which these explorations were made possible by and saw the Norse Vikings sail from their homelands in Scandinavia as far as the Middle East, into the Black Sea, and, of course — to what would be known as North America.

Between the years 800 and 1050 AD, the Vikings dared to do what other European sailors in their time would not, or could not do — they sailed into open waters well beyond any sight of land, into what was once described as “the end of the world.” They did so without any hint of modern navigational tools to aid them in their voyage and instead relied on their senses, intuition, trust in their Norse gods and deities, and a vast understanding of nature to guide their ships far and wide. These brave Norse men managed to make their way across the North Atlantic onto the easternmost shores and into the annals of North American, especially, Canadian history.

Whether raiding, trading, exploring, or claiming territory in the name of the Norwegian king, the seafaring Norsemen of the Viking Age travelled north to the Barents Sea, east to the Caspian Sea, south to northern coast of Africa, and west to Canada’s North Atlantic coastline — perhaps even further south, into the Gulf of St. Lawrence. It was not until 1960, when the discovery of the remains of eight buildings which were readily recognised as Norse style structures at L’Anse aux Meadows that provided the first archaeological proof that Norsemen had indeed reached Canadian shores. Further excavation at the site uncovered many artifacts of wood and metal that date back to around AD 1000 — among them a small cloak pin. There was also evidence of the first iron smelting in the New World taking place here.

What is interesting to note about Viking vessels is that they differed from those built for trade and exploration. Longships such as the skeid were longer and narrower, while the trade-friendly knarr was wider to accommodate more cargo and was favoured for longer journeys — including those to a land referred to as Vinland, present-day Newfoundland, and Greenland. 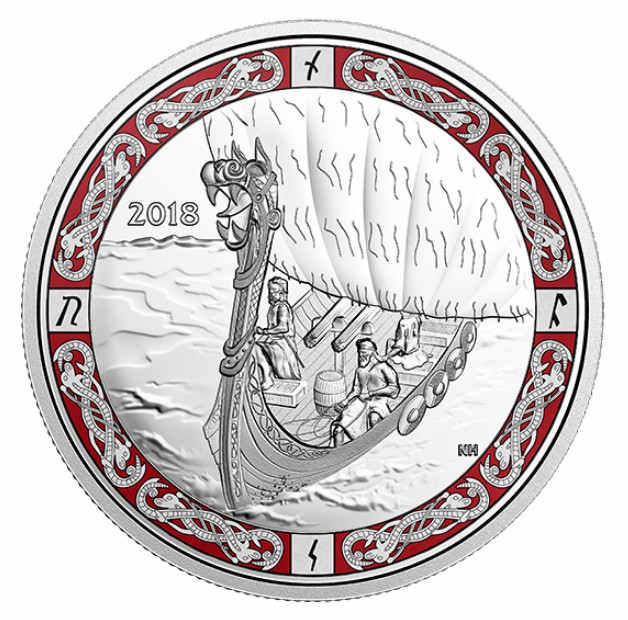 The coin is designed by Neil Hamlin who presents an artistic representation of a Viking ship at sea. An overhead view helps convey the dauntless spirit of the Norse mariners and captures the majesty of a dragon ship (the dreki or drakkar) as the wind fills the striped sail. This unique perspective places extra emphasis on the elaborately carved figurehead at the prow, which gave the ship its name and was intended to ward off evil spirits. Selective colour highlights the Norse art-inspired border that frames our portrayal of a Norse ship around AD 1000, with a special focus on the commanding nature of its fearsome dragon figurehead. The figurehead bears a Norse art-inspired motif of intertwined serpents in the Jellinge art style around AD 1000 as well and fits within the time of Leif Eriksson’s voyage from Greenland to Vinland (Newfoundland). Also included within the frame are four runic letters that represent the cardinal points (north, east, south and west), a tribute to the seafaring nature and exploratory spirit of the Vikings. 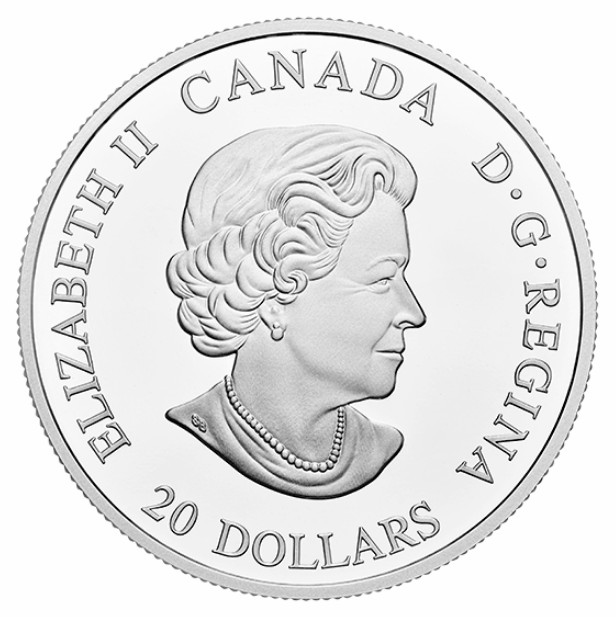 The obverse features the effigy of Her Majesty Queen Elizabeth II by Susanna Blunt and has been used on all Canadian circulation and many commemorative coins since 2003. The coin’s denomination of 20 DOLLARS is placed just under the Queen’s likeness. 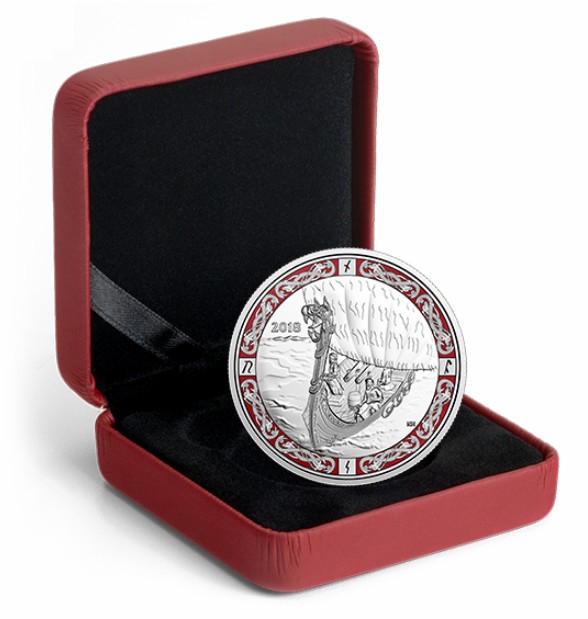 This issue is part of a three-coin series and was available by subscription to Canadian and United States residents. Each coin is individually encapsulated and presented in a Royal Canadian Mint-branded custom case and is accompanied by a numbered certificate of authenticity. The coin is also available as a separate purchase by visiting the website of the Royal Canadian Mint.