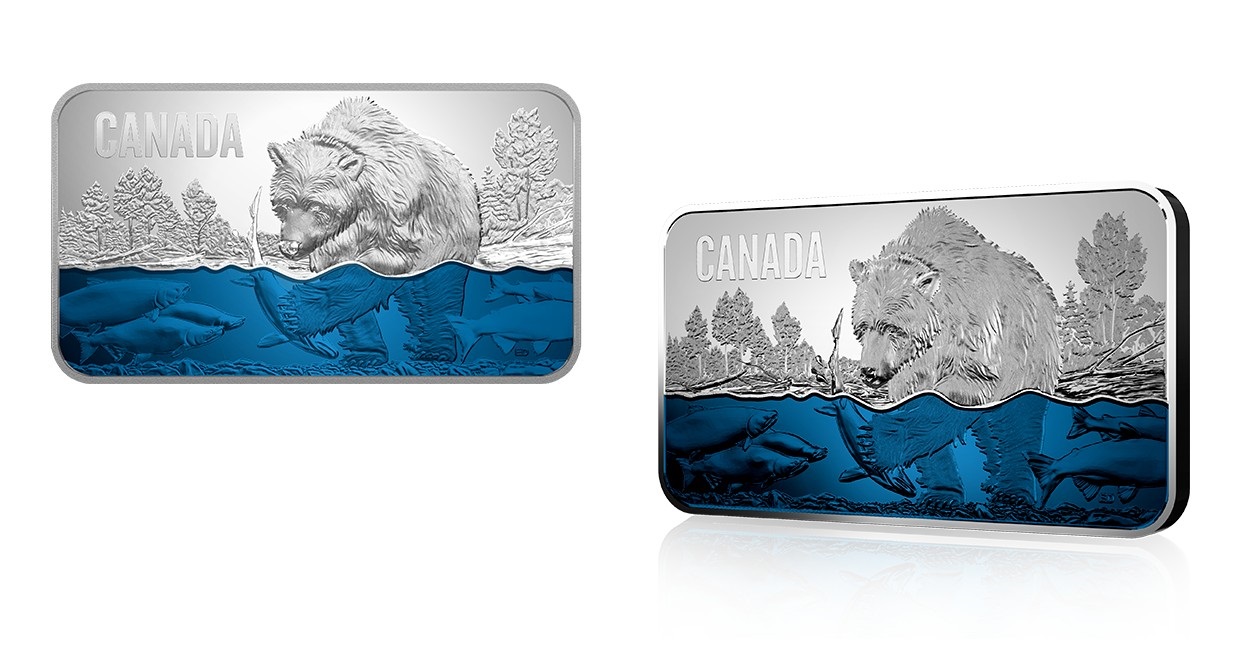 The Royal Canadian Mint has released new silver Proof coins which integrate an ultra-high relief design together with transparent enameling for the first time to emphasise crystal-blue water in a scene reminiscent of one of the region’s most spectacular natural wonders in the wild, the salmon run.

In the mighty rivers of British Columbia and Yukon, the salmon run is a spectacular natural occurrence and an awe-inspiring testament to one’s ability to persevere against all odds. Swimming against the current and leaping over obstacles, the hard-fighting fish’s odyssey from sea to spawning grounds draws many spectators along the way, including the bears and eagles that depend on the salmon for their survival.

One of Canada’s most significant salmon spawning sites is the Fraser River basin in British Columbia, where the sockeye salmon experiences a phenomenon known as “cyclic dominance,” when, every fourth year, a larger-than-average number of spawning salmon return from the sea. The salmon species has a strong sense of smell, and likely recognises its birth river by scent. Remarkably, the journey back to the salmon’s spawning grounds is arguably one of nature’s most arduous migrations. The sockeye must be in peak form to swim hundreds of kilometres against the current, and without feeding, it must occasionally leap to get above waterfalls and rapids, while constantly evading hungry predators such as eagles and bears. Other threats to the salmon include man-made obstacles such as dams, pollution, and rising water temperatures that increase the risk of mortality.

Arriving at the final destination, the female builds as many as seven redds (or spawning nests) for her roe in the gravel-lined riverbed. The male deposits his milt in conjunction to the female releasing her eggs, where fertilisation will occur almost immediately, and the female then buries the eggs in the redd. Sadly, the exhausted parents die after spawning. However, even in death, the salmon continues to play a key role in the health of our coastal rainforests and rivers, where their remains provide marine-derived nutrients such as nitrogen, phosphorus, sulfur, and carbon that enhance plant and animal life.

This pure silver coin is perfectly shaped for depicting a magnificent panoramic view featuring two emblematic species, the grizzly bear and the sockeye salmon, with predator and prey pictured together in a beautiful river setting. This particular rectangular coin is also the first to combine two technologies, a blue enamel application which tints the water without obscuring the underwater view, and an ultra-high relief engraving heightening the hungry grizzly bear’s imposing stature.

Designed by Emily Damstra, the rectangular-shaped coin features a river setting in Western Canada, where the annual sockeye salmon run is underway. Translucent colour enamel adds a beautiful blue hue to the water while allowing an underwater view of the engraved sockeye salmon (Oncorhynchus nerka) and the gravel-lined riverbed. Engraved in ultra-high relief to heighten its imposing stature, a grizzly bear (Ursos arctos) has waded into the shallow water to catch its meal. The split-shot nature of the design is a reminder of the salmon’s crucial role in this ecosystem, whether sustaining other wildlife or providing marine-derived nutrients that support plant life. The reverse includes the engraved word CANADA. The obverse features the face value 25 DOLLARS, the year 2018, and the effigy of Her Majesty Queen Elizabeth II designed by Susanna Blunt which has been used on all Canadian circulation and many commemorative coins since 2003. 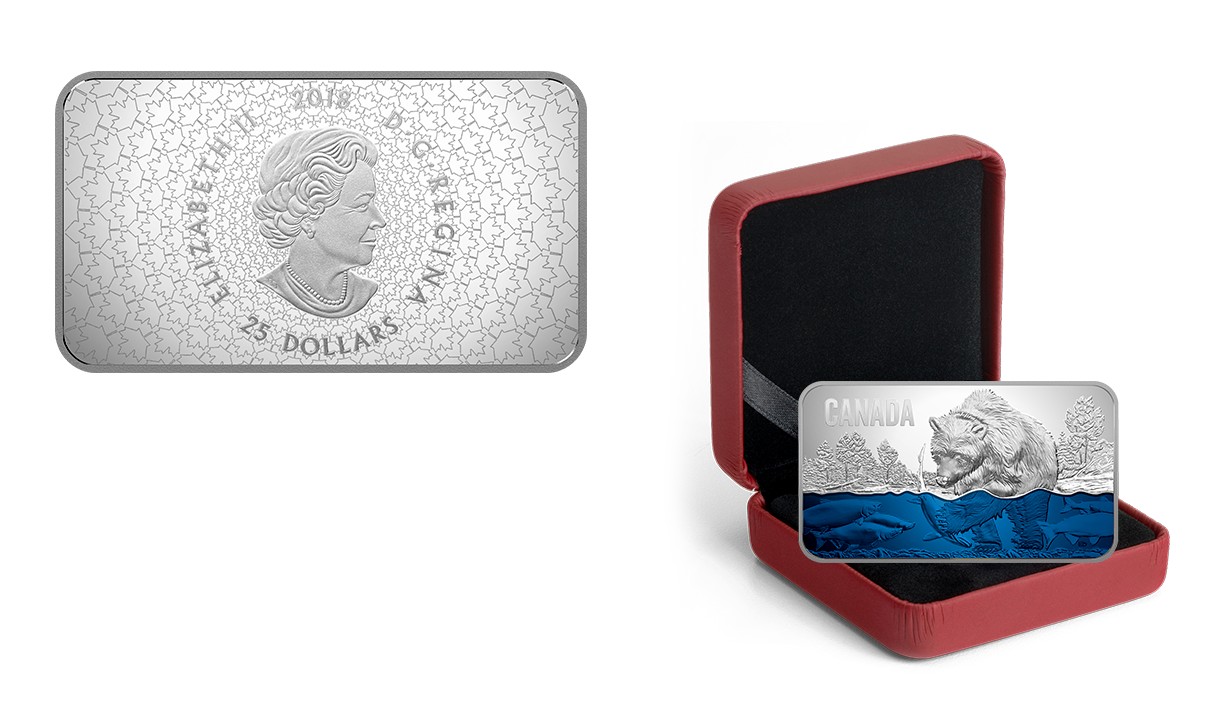 The coin is specially encapsulated to accommodate its rectangular shape and is presented in a custom Royal Canadian Mint-branded case, accompanied by a certificate of authenticity. For additional information about this coin and other coins available from the Royal Canadian Mint, please visit their website.