The Royal Canadian Mint has released new Reverse Proof one-ounce platinum collector coins which mark the 70th year of reign of the country’s longest-serving monarch. Canada is North America’s only constitutional monarchy and has been so for 155 years. To date, no other monarch has ever marked as many Canadian milestones as the present sovereign, Queen Elizabeth II. This year, Her Majesty becomes Canada’s first monarch to celebrate her Platinum Jubilee, a 70-year reign as Queen of Canada and Head of the Commonwealth. Since Canada’s confederation in 1867, Her Majesty is the sixth sovereign and is the first to be separately proclaimed Sovereign of Canada separately from Queen of the United Kingdom. During her seven-decade reign, there have been 12 Canadian prime ministers and 13 governors general, her personal representatives in Canada. Since 1951 as princess, then Queen, Elizabeth II has visited Canada on more than 22 occasions, the most of any reigning sovereign and is the most travelled monarch in history. Most notably as Queen of Canada, she officially opened Parliament for the first time in 1957 and along with U.S. President Eisenhower, she took part in the official opening of the St. Lawrence Seaway in 1959. In 1967, high-profile visits were undertaken to celebrate Canada’s centennial and later that year to Expo 67. On the occasion of the first Olympiad to be hosted by Canada in 1976, the Queen was on hand to declare the Games opened. The Queen’s last visit to Canada was in 2010 when she and the Duke of Edinburgh took part in celebrations of Canada Day on Parliament Hill. 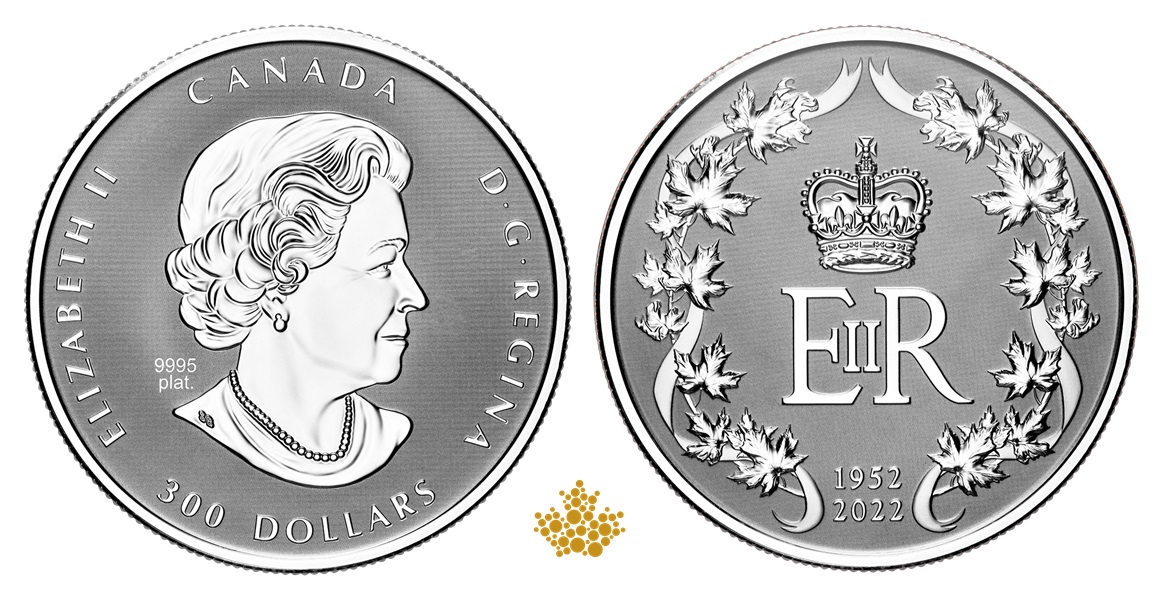 Designed by Katherine Rose-Desrochers, the reverse design features Her Majesty Queen Elizabeth II’s Royal Cypher, with the letters E II R (which represent Elizabeth II Regina), meaning “Queen,” and is surmounted by a representation of St. Edward’s Crown. Her Majesty’s personal insignia is surrounded by boughs of Canadian maple leaves entwined with a ribbon. The years 1952 2022 commemorate the 70th anniversary of Her Majesty’s accession to the throne. The obverse features the effigy of Her Majesty Queen Elizabeth II by Susanna Blunt. The denomination of 300 DOLLARS is placed below the Queen’s effigy. 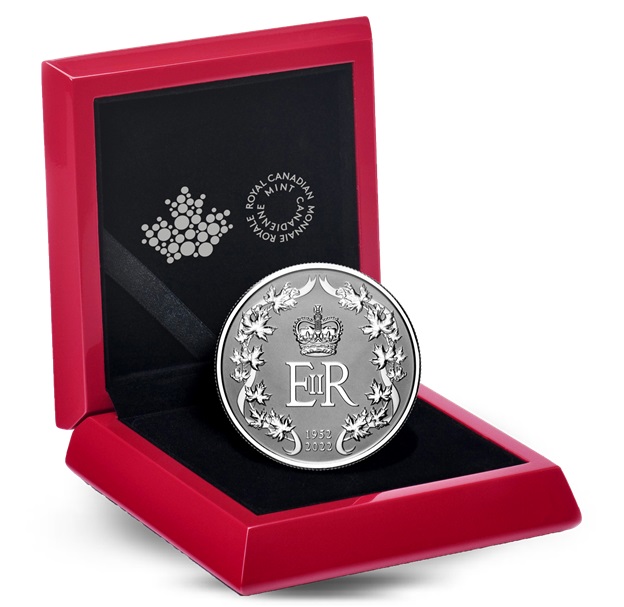 Each one-ounce Proof platinum coin is encapsulated and presented in a hardwood red case accompanied by a certificate of authenticity. For additional information, please visit the website of the Royal Canadian Mint.