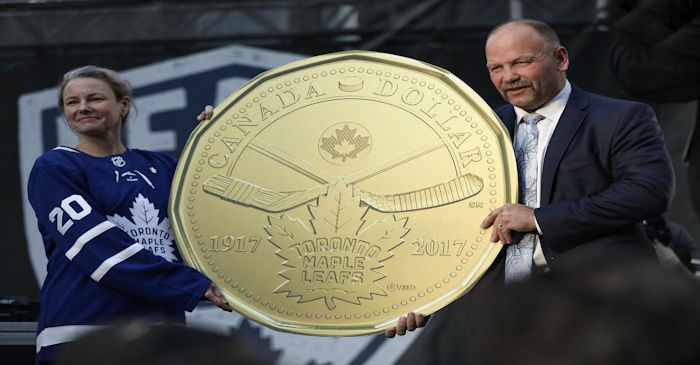 The Royal Canadian Mint have unveiled (7th October) a new dollar coin which is in celebration of one of the country’s beloved and revered hockey teams — the legendary Toronto Maple Leafs. With the start of the 2017–18 season, the Leafs mark 100 years since they first took to the ice. (Earlier this year, the mint released a circulating quarter in honor of the 125th anniversary of the Stanley Cup.) The anniversary was celebrated with a special commemorative dollar coin that was unveiled outside the Air Canada Centre on Maple Leaf Square. For the last 100 years, the Toronto Maple Leafs have delighted hockey fans across Canada and became a pillar of the country’s sports heritage. From this point forward, Leafs fans can now look forward to finding one of these special coins in their change and collecting it as a piece of Canada’s glorious hockey history.

Taking part in the unveiling was Toronto Maple Leafs alumnus Wendel Clark and Royal Canadian Mint president and CEO Sandra Hanington, who commented during the unveiling, “The Mint is proud to recognize the tremendous legacy of the Toronto Maple Leafs with a special one-dollar circulation coin celebrating their 100th anniversary.” Also taking part was the honourable Bill Morneau, minister of finance, who also commented, “By honouring 100 years of the Maple Leafs, the Royal Canadian Mint has created a keepsake which is as enduring as Canada’s pride in this truly legendary hockey team. As a resident and Member of Parliament for Toronto, I couldn’t be more proud of this legacy.” 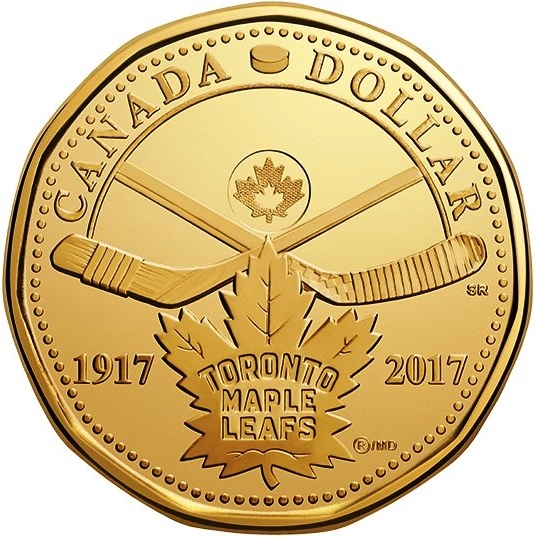 The 11-sided $1 circulation-type coin is designed by Canadian artist Steven Rosati. The reverse side depicts the emblematic Maple Leafs logo flanked by classic wood and modern composite hockey sticks, which, along with the dates 1917 and 2017, symbolise the team’s 100-year history. A puck at the top of the design completes the look of this unforgettable hockey-themed coin, of which five million examples are now starting to circulate. 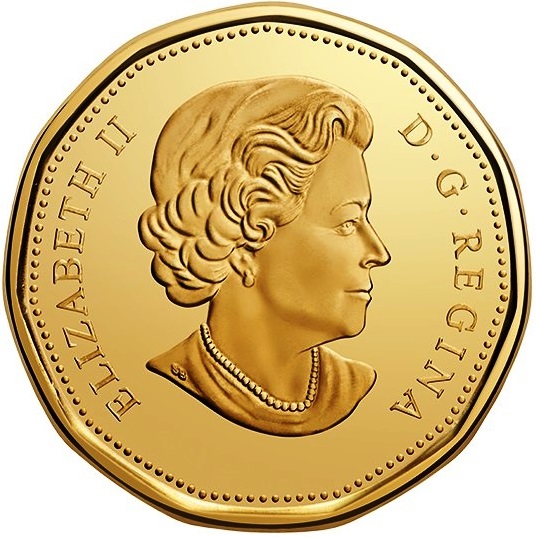 The coin’s obverse includes the effigy of Her Majesty Queen Elizabeth II created by Susanna Blunt, which is seen on all circulation and many collector and commemorative Canadian coins since 2003.

Hockey fans across Canada can start looking for this coin in their change; attend coin exchanges at the Mint’s Ottawa, Winnipeg, and Vancouver boutiques; or obtain limited quantities through an online coin exchange (limited to Canada only). Also available is a special wrap roll of 25 one-dollar circulation coins featuring the official logo of the 100th anniversary of the Maple Leafs. Additionally, a pair of 99.99% pure silver collectibles are available: a 1/4-ounce coin featuring the Leafs anniversary logo with the number “100” selectively enhanced in the team’s official shade of blue, and a 1-ounce fine silver coin illustrating a modern-era and old-time player in action with a selectively coloured Maple Leafs logo — also designed by Steven Rosati. These products can be ordered as of the 7th October by contacting the Royal Canadian Mint at 1-800-267-1871 in Canada, 1-800-268-6468 in the U.S., or by searching online. The coin is also available through the Mint’s global network of dealers and distributors, including participating Canada Post outlets. For additional information, please visit the website of the Royal Canadian Mint.

Milk Spots on Modern Silver Coins: How Big of an Issue?

Canada: In a return to traditional design, Canada’s Confederation anniversary features on a new silver $1