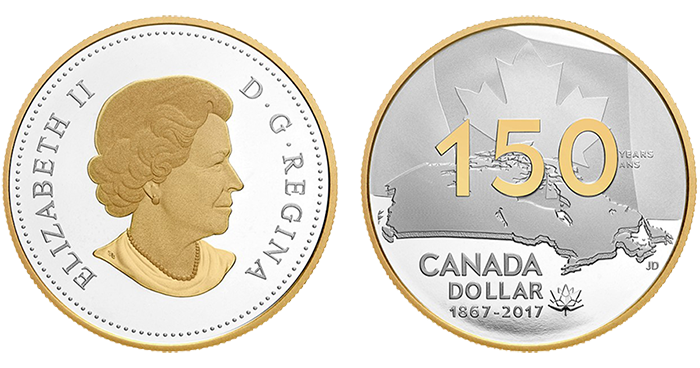 The Royal Canadian Mint have launched their 2017-dated silver dollar, which was long-awaited for this year as the theme celebrates Canada’s 150th anniversary of Confederation, achieved in July 1867. The Canadian silver dollar—first issued in 1935 as a circulation-type commemorative coin and issued continuously as a commemorative coin since 1971—is considered a firm favourite with coin collectors worldwide.

Canada’s first celebration of their confederation took place in 1967, when a series of coins were issued for the occasion. All six circulating denominations were specially designed and issued, along with a $20 gold piece that was included in an exclusive seven-piece set. (The gold coin was omitted from the set available in the United States, owing to the illegality of gold ownership prior to the change in the law in 1974.) 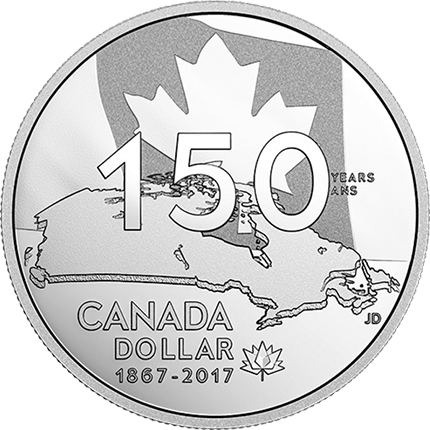 The Canada 150 logo, with 13 pieces representing the 10 provinces and 3 territories.

The reverse of the new coin focuses on two of the more recognisable symbols of Canadian nationhood: the national flag, which features the maple leaf; and the geopolitical map of Canada, a land located north of the United States. Larger in land mass than its southern neighbour, Canada is in fact the world’s second-largest country in area, second only to the Russian Federation. The numeral 150 is superimposed over the double-layered map of Canada. Below the map, in three lines, are the words CANADA and DOLLAR, along with the commemorative years 1867–2017. To the right of this text group is the national insignia of the confederation anniversary, consisting of 13 diamond shapes representing the 10 provinces and 3 territories. 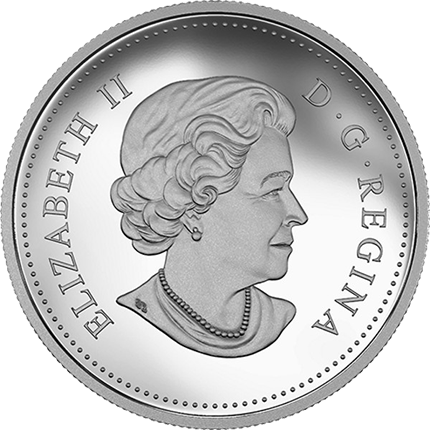 The obverse features Susanna Blunt’s effigy of HM Queen Elizabeth II, which has been included on all circulation coins and many commemorative and collector coins since 2003. On one option for this coin, selective gold plating is applied to the rim and the effigy of the Queen and, on the reverse, to the rim and the number 150. (See the illustration at the top of this post.)

The Proof dollar with selective gold plating applied to the featured design is available only as part of the pure silver Proof set, which includes all circulation denominations from the 5-cent to the $2 coins. This year’s edition includes new commemorative reverse designs celebrating the confederation anniversary. The traditional Proof dollar is available separately and is presented in a custom branded case with certificate of authenticity. For additional information on this and other coins offered by the Royal Canadian Mint, please visit their website.   ❑
Share: