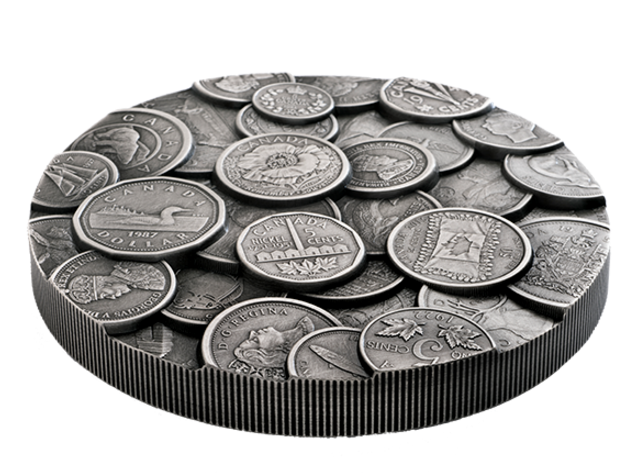 Canada saw their second commemorative dollar when the King and Queen embarked on their first-ever Royal tour of Canada in 1939, just months before the outbreak of hostilities in Europe that would result in the Second World War. The year 1948 saw the British Monarch lose the designation of “Emperor of India,” a change that was reflected on coinage of the British Empire and homeland issues when the legend IND IMP was removed. In 1949, with the incorporation of Newfoundland into the Canadian confederation, a new commemorative dollar depicting a view of The Matthew, the ship on which John Cabot sailed on his voyage to Newfoundland in 1497; this coin was designed by Thomas Shingles, then chief engraver of the Royal Canadian Mint.

In 1953 a bust of a youthful Elizabeth II wearing a laurel wreath and designed by British artist Mary Gillick replaced the effigy of George VI. The more notable changes for Canada’s coinage came in 1965 with a new effigy of the Queen, an iconic and graceful portrait created by Arnold Machin of the United Kingdom. This was the first of three portraits of the Queen to be used to date. In 1965 a draped, mature bust of the queen wearing a tiara was introduced, and in 1990 this was replaced by the crowned effigy, designed by Dora de Pédery-Hunt, in use until 2003.

More notable changes occurred with newly commissioned one-year-only reverse designs undertaken for Canada’s centennial anniversary of Confederation in 1967. The circulation coins from the dollar to the cent were redesigned by internationally renowned artist Alexander Colville (1920–2013) and were considered some of the best numismatic designs for their time. The depictions of Canadian wildlife of a rock dove on the 1-cent coin, a rabbit on the 5-cent coin, a mackerel on the 10-cent coin, a lynx on the 25-cent coin, a wolf on the 50-cent coin, and a goose on the 1-dollar coin were simple, unencumbered designs with a solid and plain background that enhanced their detailed images perfectly.

In 1987 Canada introduced a new 1-dollar coin, which both replaced the larger nickel piece that had been produced since 1968 and looked to effectively replace the 1-dollar banknote, which was last printed in 1989. The new coin, a smaller, golden-colored piece, was seen as far more practical, and its distinctive 11-sided shape further enhanced its new place in the country’s circulation coins. The reverse design, which depicted a loon swimming on a calm lake, gave the coin its distinctive “loonie” nickname. A $2 coin, which both replaced the next-smallest banknote and introduced the denomination to the coinage for the first time, was undertaken on February 19, 1996. The bimetallic piece, with its golden core and silver-colored ring depicting a polar bear, was colloquially named the “toonie” and has been used for several commemorative designs since its introduction 20 years ago.

In 2012, the Canadian government announced that they would no longer commission the production of one-cent coins, owing to their increased cost and lack of purchasing power. As a result, the last one-cent coin was minted on May 4 of that year, and the distribution of the coin ended in February 2013. Although the coin remained (and remains) legal tender, retailers were encouraged to “round up or down” prices to the nearest five cents.

In preparation of Canada’s celebration of their 150th anniversary of confederation, a design contest was announced to the public for a new, one-year-only series of circulation coins from the $2 to the 5-cent piece (but excluding the 50-cent denomination). Entitled “My Canada, My Inspiration 2017,” the competition was announced in March 2015 and open to all Canadians. With thousands of designs submitted and over a million votes cast for the proposed designs, the winning depictions were announced on November 2, 2016. Each coin’s design was unveiled in the hometown of its designer, and the coins have been produced in Proof and mint sets in time for Christmas 2016.   ❑
Share: