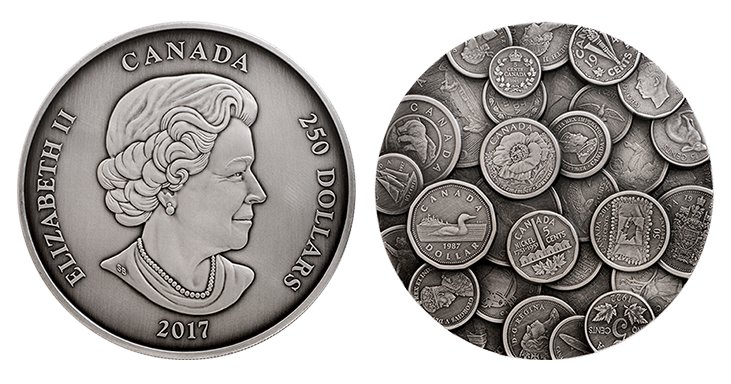 On November 11, the Royal Canadian Mint officially launched an extraordinary numismatic homage to the country’s 150th anniversary of confederation. The pure silver coin, with a weight of one kilogram, pays tribute to the many commemorative and circulation coins issued since Canadian confederation in 1867. The collage-style design includes some of some of Canada’s finest and most widely recognized coins, in precise detail, at actual diameters, and in ultra-high relief. (Scroll down for more on these coins, and on the history of Canada’s confederation.) 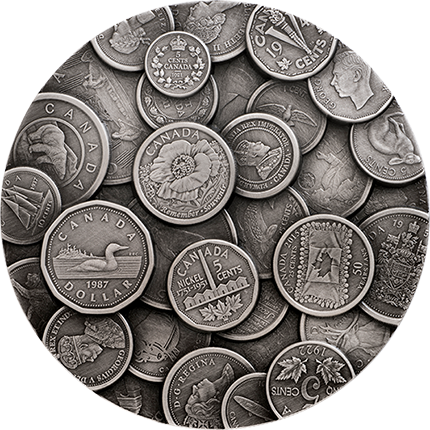 Featuring approximately 35 obverse or reverse images from previous and current circulation coinage, this amazing large-format coin makes the ideal canvas of purest silver. The subjects range from the 100th anniversary of women’s right to vote to the Victory nickel of the Second World War; from the War of 1812 to the 50th anniversary of the Canadian flag; from the Canadian Arctic Expedition to the Canadian Centennial series. And of course the iconic and ever-familiar Voyaguer dollar, though hard to find, is included the design. 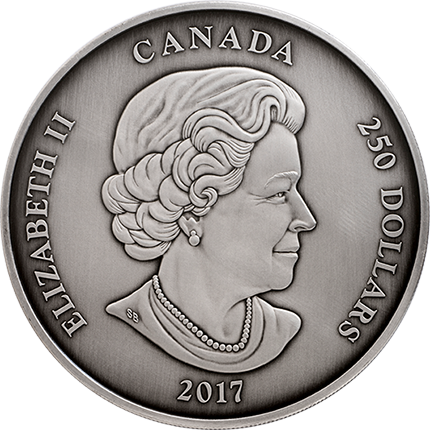 The obverse includes the effigy of HM Queen Elizabeth II as created by Susanna Blunt and used on all Canadian circulation and many commemorative coins since 2003. The reverse of the 2017-dated coin is sure to include an example of most every collector’s favorite Canadian coin, with many being easy to spot. Suitable as a collector’s piece as well as for presentation, this one-kilo coin is limited to 500 pieces.

The coin is encapsulated and housed in a custom wooden display case within a black protective box, and is available only from the Royal Canadian Mint retail webstore.

Canada’s rich history as a parliamentary dominion within the British Empire began with a conference, called by the Colonial Office, which was held on September 1, 1864, in Charlottetown, Prince Edward Island. The primary aim was to discuss or consider a union or a confederation of the existing Canadian territories in what was referred to as British North America. Just a few weeks after what was later referenced as the Charlottetown Conference, delegates met in Quebec City in October for the Quebec Conference, where the Seventy-two Resolutions—which would later form Canada’s overall government—were agreed to.

On March 8, 1867, the British North America Act, which would later emerge to serve as the cornerstone of Canada’s constitution, passed the British House of Commons, having previously passed the House of Lords. Queen Victoria, who would continue to serve as head of state of the new confederation, gave the bill Royal Assent on March 29, 1867, with the newly created Dominion of Canada coming into official existence from July 1 the same year—an event that is  celebrated 150 years later.

Prior to confederation, the coins used in the Canadian territories were based on the British Pound, with coins conforming to the weights and finenesses of pennies, shillings, and sovereigns. The Province of Canada—the united colonies of Lower and Upper Canada and the precursor to the Dominion of Canada—adopted a decimal system that was utilized in 1858. The new system was based on a dollar and equal in value to the United States dollar. Silver from the United States had become very plentiful, and trade with the Americans made it necessary to adopt a decimal system. The new coins consisted of silver 5-, 10-, and 20-cent pieces dated 1858 and bronze cents dated 1858 or 1859. Nova Scotia issued bronze cents and half cents in 1861 and 1864, and one-cent coins alone in 1862. New Brunswick one-cent coins were issued in 1861 and 1864, and silver coins similar to the Canadian issues were minted in 1862 and 1864. Prince Edward Island also issued a one-cent coin in 1871, with the coinage of Newfoundland beginning in 1865. All of these coins, which adhered to the same standards and specifications, became legal tender in the Dominion of Canada after the various provinces entered the confederation.

(A Guide Book of Canadian Coins and Tokens, by James A. Haxby)

The coin designs at this time included an effigy of Queen Victoria on the obverse with denominations surrounded by either garlands or sprigs of maple leaves on each side of the denomination, which was positioned in the middle on the reverse. From 1870 onward, the Dominion of Canada’s circulation coins would carry the word CANADA on the obverse, as in the case of the coins issued during the reign of Queen Victoria, with a 25-cent coin being minted in place of the former 20-cent coin from this time.

In 1902, the word CANADA was moved to the reverse side and a crowned effigy of King Edward VII replaced that of Victoria. Little change was noticed during the nine-year reign of King Edward, with the exception that the Royal Mint decided to operate a branch in Ottawa rather than continue to mint Canadian coins in England. The branch had been authorized by both British and Canadian Parliaments in 1901, with the first coins minted in Canada being produced in 1908. A change in effigy in 1911 to reflect the succession of King George V in 1910 saw the retention of reverse designs but significant changes in both the one- and five-cent coins, with the one-cent coin being reduced in size to conform more closely to the U.S. cent, and the five-cent denomination being produced in nickel instead of sterling silver, also to conform more closely to the U.S. five-cent coin.

Canada’s first-ever commemorative coin, a silver “Voyageur dollar” depicting a voyageur (or unlicensed fur trader) and a native man paddling a canoe on the reverse, was issued on the occasion of the 25th year of reign of King George V in 1935. This coin was created by Emanuel Hahn, a native of Germany who became a well-known Canadian artist. This piece also became Canada’s first circulating dollar coin after the commemorative design transitioned to a circulation coin in 1936; it continued as a circulation coin until 1986.

Upon the accession of the present Queen’s father, King George VI, in 1936, the Royal Canadian Mint—so named and recognized since 1931—decided not only to change the obverse with an effigy of the new King but to introduce new reverse designs, which would see the denominations with individual motifs. The designs of George Kruger Gray, an English artist who made a reputation for himself in coin design and stained-glass windows, were used for the 1-, 5-, and 50-cent coins; while Emanuel Hahn’s designs for the 10- and 25-cent coins were also used. These designs have been in continual use to this day, with the exception that the one-cent denomination was discontinued in 2013 and the 50-cent coin’s design was modified. (Continued on p. 2)