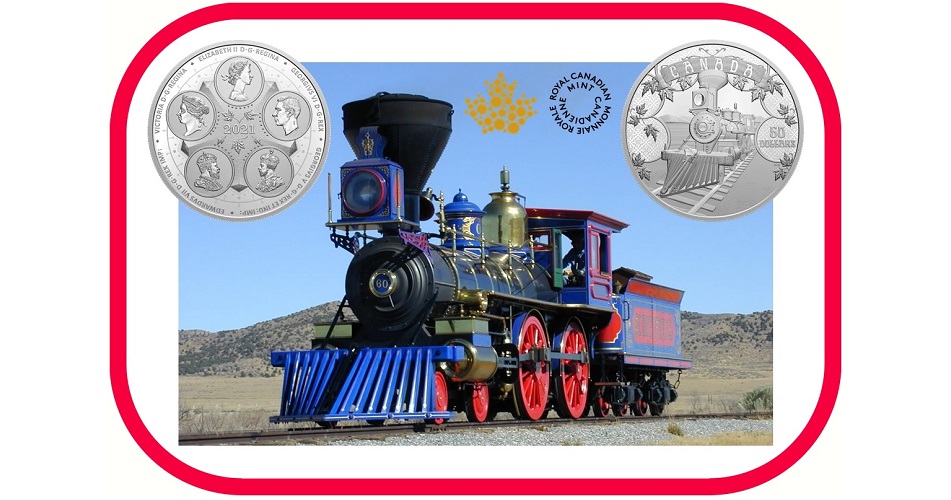 The Royal Canadian Mint has launched (12th January) a new three-coin series entitled “The First 100 Years of Confederation,” which focuses on Canadian efforts to bridge distances and come together by means of different modes of transportation — first by rail, then by sea, and finally — by air.

As a country that is the world’s second-largest, with maritime provinces on the east coast into the Atlantic Ocean, a province bordering the Pacific Ocean, and a vast coastline bordering the Arctic Ocean, Canada is a vast territory with a crucial need to be internally connected. One of the most significant Canadian accomplishments was the completion of the Trans-Canadian Railway network.

With the Canadian Confederation in July 1867, the creation of a Trans-Canadian Railway was initially undertaken as the national dream by the new government of Prime Minister Sir John A. Macdonald, Canada’s first prime minister. Because a voyage from coast to coast would entail four months of travel by sea, a land transport link to the East was a condition for British Columbia to join the Confederation. The government proposed to build a railway linking the Pacific province to the Eastern provinces within 10 years of the 20th July 1871, the same day British Columbia formally became Canada’s sixth province.

The first coin in the series pays homage to the initiative, construction, and eventual completion of this extraordinary railway network from 1867 to 1914. Today, the Canadian Pacific Railway owns and operates approximately 20,100 kilometres (12,500 miles) of track through six provinces of Canada and into the United States, stretching from Montreal, Quebec to Vancouver, British Columbia, and as far north as Edmonton, Alberta. 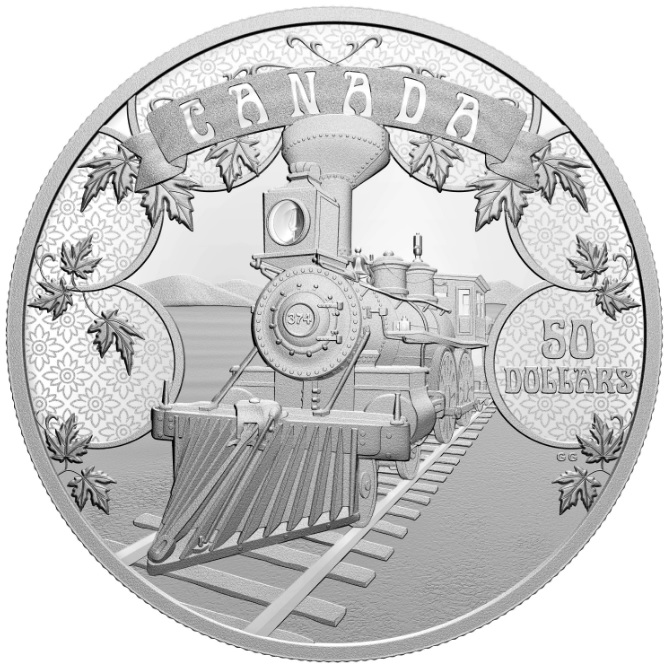 The new coin is designed by the artist Glen Green, who depicts Canada’s earliest locomotive engines built by Leviathan model 440 on a single track of rail, the identification number 374 shown on the front face of the locomotive itself. An ornate décor pattern surrounds the train engine and maple leaves strewn as if falling from and blowing off trees. To the right of the primary design is the denomination of 50 DOLLARS and above is the text CANADA in stylised script. 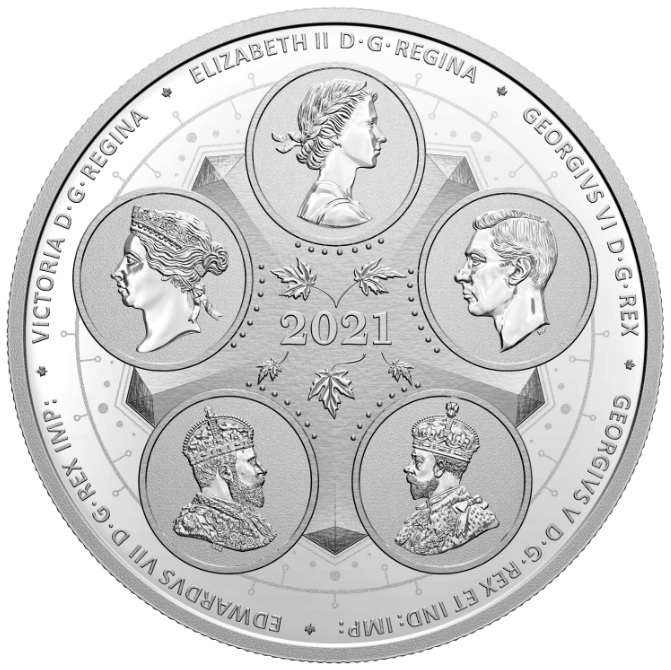 The obverse side ties the first 100 years of Confederation together through the coins of Canada. Depicted are all five sovereigns recreated from the original effigies included on the obverse side of Canadian coinage from 1867 to the present. Canada’s current sovereign, HM Queen Elizabeth II, is seen at the top. Going clockwise are the effigies of King George VI (reigned 1936–1952), King George V (reigned 1910–1936), King Edward VII (reigned 1901–1910), and Queen Victoria (reigned 1867–1901). The collection of portraits is surrounded by the titles of each sovereign in Latin along the edge with the year of issue 2021 placed in the middle of the collection of portraits.

Each mega-sized silver Proof coin is encapsulated to accommodate its larger size and is presented in a Royal Canadian Mint-branded black custom case accompanied by a numbered certificate of authenticity. For additional information about this coin and other coins in the series, please visit the website of the Royal Canadian Mint.