The Royal Canadian Mint has launched (7th April) a new silver Proof coin to mark 100 years since the battle of Vimy, a pivotal moment for Canada and its military. Notable Canadians gathered on Sunday, the 9th April, on the very site in Vimy, France, where the decisive battle took place 100 years ago to remember those who fell in defence of their king and country. In attendance to mark the occasion were Canada’s governor-general, David Johnston, along with Canada’s prime minister, Justin Trudeau; and, representing HM Queen Elizabeth II, HRH the Prince of Wales along with his two sons, the Duke of Cambridge and HRH Prince Henry of Wales (both one-time soldiers in the British Army). The event took place at the steps of the Canadian National Vimy Monument. 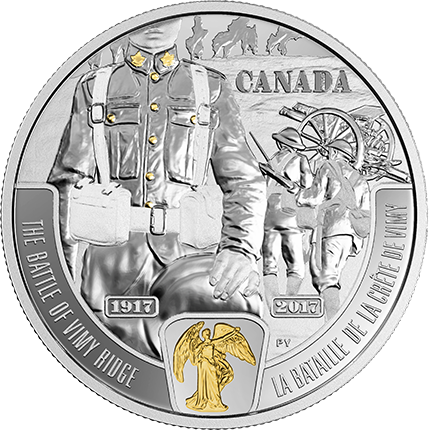 Designed by Canadian artist Pandora Young, the reverse of the coin evokes the scene of the relentless artillery fire supporting Canadian troops in the innovative “creeping barrage” advancing towards Vimy Ridge on the horizon. (More on the “creeping barrage” can be found below the spec chart.) A close-up of a lone Canadian soldier, his face purposely absent to symbolize all Canadians at the Battle of Vimy Ridge, stands in the foreground. Selective gold plating on the soldier’s uniform echoes the special significance of this battle in Canadian and world history. 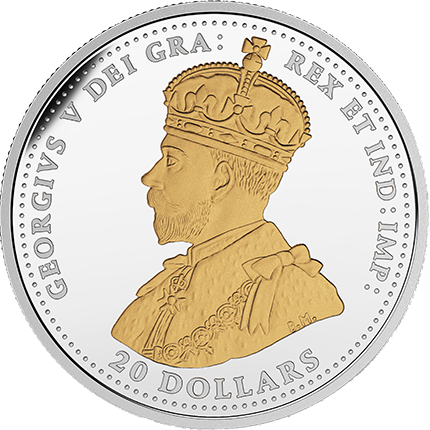 The obverse of the coin features medallic artist T.H. Paget’s effigy of HM King George V, who was Canada’s reigning monarch throughout the First World War. The denomination of 20 DOLLARS is placed below the King’s gold-plated effigy.

The coin is part of the Royal Canadian Mint’s popular First World War Battlefront Series, which was launched in 2014 and pays tribute to the many decisive battles in which the Canadian armed forces participated in the five-year-long war.

Please visit the website of the Royal Canadian Mint for more information on this and other coins the mint offers. 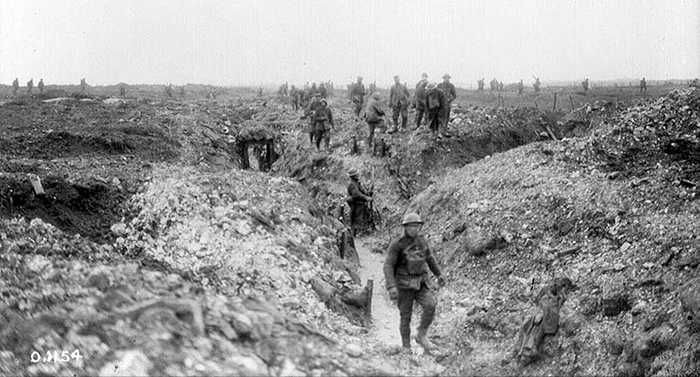 With a 1914 declaration of war on the Imperial German forces allied to the Austro-Hungarian Empire against the forces of Serbia and the Russian Empire, Great Britain enlisted the armies of their Dominions overseas, Canada being among them.

Launched in the spring of 1917, the Battle of Arras in northern France was an attempt to break the bloody stalemate on the Western Front, where the Battle of the Somme had yielded few gains. One of the most important components to this Allied offensive was the capture of Vimy Ridge, a heavily fortified slope that provided sweeping views of the flat landscape below. Previous attempts to storm this enemy stronghold had failed—until those fateful four days in April 1917, when all four divisions of the Canadian Corps came together for the first time in history to fight as one in a methodically planned operation that became a defining moment for Canada and their emerging reputation as a formidable fighting force.

Imperial German forces had seized the seven-kilometre ridge and surrounding territory in 1914. The French had unsuccessfully tried to recapture it in May 1915 and again in September 1915, at a cost of over 100,000 casualties. In preparation for the attack, sections of the enemy lines were reconstructed to give Canadians a sense of what they would encounter. These extensive networks of tunnels were dug at least 10 metres (30 feet) into the ground in order to protect the soldiers from artillery fire, giving rise to the term trench warfare. The longest tunnel was almost a kilometre—or a sixth of a mile—long, with some being equipped with rail transport, electric lighting, and even running water. 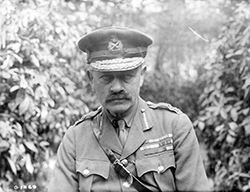 During the attack, each Canadian soldier moved forward carrying up to 36 kilograms (nearly 80 pounds) of equipment. When the infantry moved out on the morning of April 9, 1917, they were well supported by nearly 1,000 artillery pieces, which made use of a new artillery fuse (the 106 fuse) allowing shells to explode on contact. The commander of the Canadian Corps, Lieutenant-General Sir Julian Byng, was a beloved figure by Canadian troops for his style of leadership. Under his trusted command, the Canadian Corps—or “the Byng Boys,” as they called themselves—underwent intensive training after the hard-learned lessons of the Battle of the Somme. Taking cues from the French army, Canada’s troops adopted a new offensive strategy at Vimy, one forged by careful preparation and an emphasis on logistics. Nothing was left to chance, and the troops rehearsed tirelessly, using models and maps to familiarize themselves with the terrain and enemy positions. Further tunnels were dug beneath “No Man’s Land” to facilitate the movement of troops and munitions, with some of them equipped with rail lines, water, electricity, and large storage bunkers. Each soldier knew his task, for the infantry was assigned specialized roles such as grenade-throwers, riflemen, and machine-gunners.

The week before the attack, the Canadian army launched a prolonged bombardment. Dubbed the “Week of Suffering,” it involved more than a million shells pounding enemy positions. At 5:30 a.m. on the 9th of April 1917, the first attacking wave of 15,000 Canadians soldiers set out. Under the cover of a “creeping barrage,” the infantrymen advanced behind a line of unrelenting artillery fire aimed just ahead of them—all proceeding at a precise rate that was timed to the minute. The strategy was a successful one, with the rolling artillery barrage providing cover for the infantry and keeping the enemy in their bunkers. By the time the enemy gunners moved to man the machine guns, the Canadian troops were already upon them.

Within a half hour, Canadians had captured part of the front line, and within the hour, they had also captured a portion of the second line. By noon, most of the ridge was in Allied hands. On the 10th April, a frontal bayonet charge allowed them to take Hill 145, which was the highest point on the ridge—and since 1936, the site of the Canadian National Vimy Monument. Two days later, Canadians took the other high point, nicknamed “the Pimple,” and the enemy retreated. Coupled with the British Corps’ concurrent efforts in Arras, the operations had yielded more ground and munitions than any other British-led offensive.

Canada’s soldiers emerged from the hard-fought battle with a deserved reputation as an offensive force to be reckoned with, and a surging sense of national identity, both on the battlefield and at home. Their newfound sense of Canadian identity and toughness came at a high cost, with nearly 3,600 Canadian soldiers losing their lives during the intense four-day operation and 7,000 more sustaining serious wounds. Four Canadians earned  the Victoria Cross, the highest recognition accorded British or Dominion soldiers, for their actions at Vimy Ridge.

As for Byng, the future governor-general of Canada was promoted to the Third British Army shortly after. Raised to the peerage after the war, Byng was titled 1st Viscount of Vimy and was later appointed governor-general of Canada from 1921 to 1926. Taking his place on the battlefield was 41-year-old Arthur Currie, who, in taking up command of the Canadian Corps, became the first Canadian to ever lead his nation’s army in battle.   ❑

Observing the 100th anniversary of the Battle of Vimy Ridge in Ypres, Belgium, April 9, 2017: