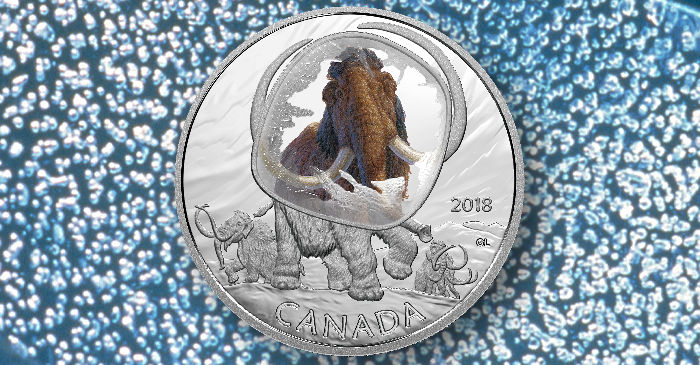 The Royal Canadian Mint have launched new coins in a new series which focuses on animals found in Canada during the last Ice Age. The first in the two-coin series highlights the woolly mammoth — the closest prehistoric relative to the elephant. It may be difficult to believe today, but for millennia, herds of enormous woolly mammoth roamed the frozen landscapes of North America. The mammoth thrived throughout the Pleistocene Era, a period of successive glaciations throughout the northern hemisphere that featured a significant drop in global temperatures. Covered in insulating moisture-resistant hair that could measure up to a metre in length, adult mammoths weighed up to 8,000 kilograms (nearly 18,000 pounds) and grew to more than three metres (10 feet) in height. Mammoths are believed to have lived, on average, between 60 and 80 years and used their massive tusks to fend off predators and to dig in the snow and gather food. Though their key predators were the various large cats and wolves that populated the continent, and even then, only when the mammoth were young enough to be hunted, Man proved perhaps the deadliest of all and are believed to have eradicated them in a number of regions. It is believed that the last mammoth population, on Russia’s Wrangel Island in the Arctic Ocean, died out around 2000 B.C. but are one of the most common and well-preserved species uncovered from the Ice Age, making them one of the best-known mammals of the Pleistocene. Despite the resemblance of mammoths to today’s elephants, the mammoth’s adaptations for cold environments—and the elephants adaptations for heat make the two surprisingly different. Besides their shaggy fur and mouth specially structured for grazing on tough grasses, the mammoth’s ears were significantly smaller than those of the African elephant, whose large ears are an important thermoregulator. 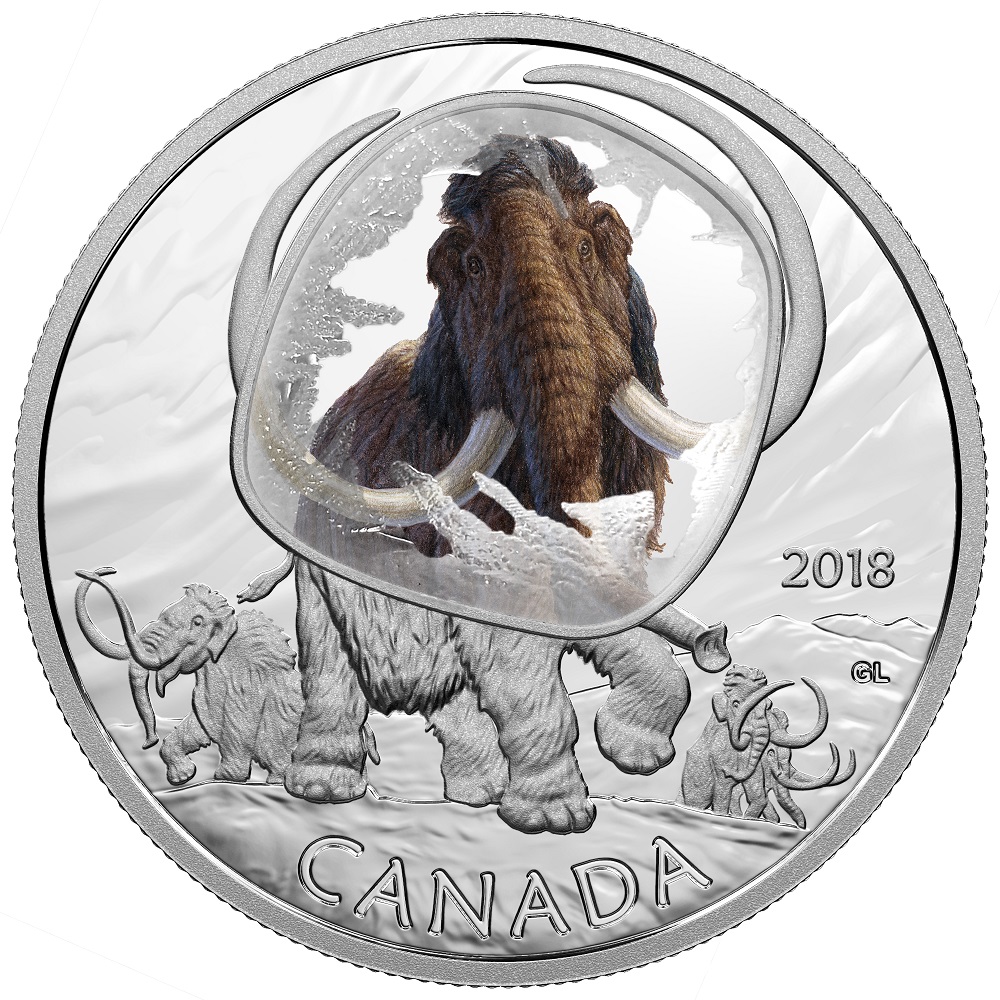 Designed by Canadian artist Glen Loates, the reverse side of the coin portrays a snowy Ice Age landscape with a herd of mammoth traversing a frozen plain. The image centres on a single mammoth who faces the viewer, its massive tusks rising high into the sky. The image is overlaid with a frosted ice-like dome. An ice bubble was applied over top of the mammoth while around the perimeter of the ice bubble is a simulated frost effect. Outside of the ice bubble, the mammoth was struck with no colour — capturing the true essence of its unique time in prehistoric history. The portion of the portrait under the ice is coloured while the remainder of the image is struck-only. The reverse includes the text CANADA and the date 2018. 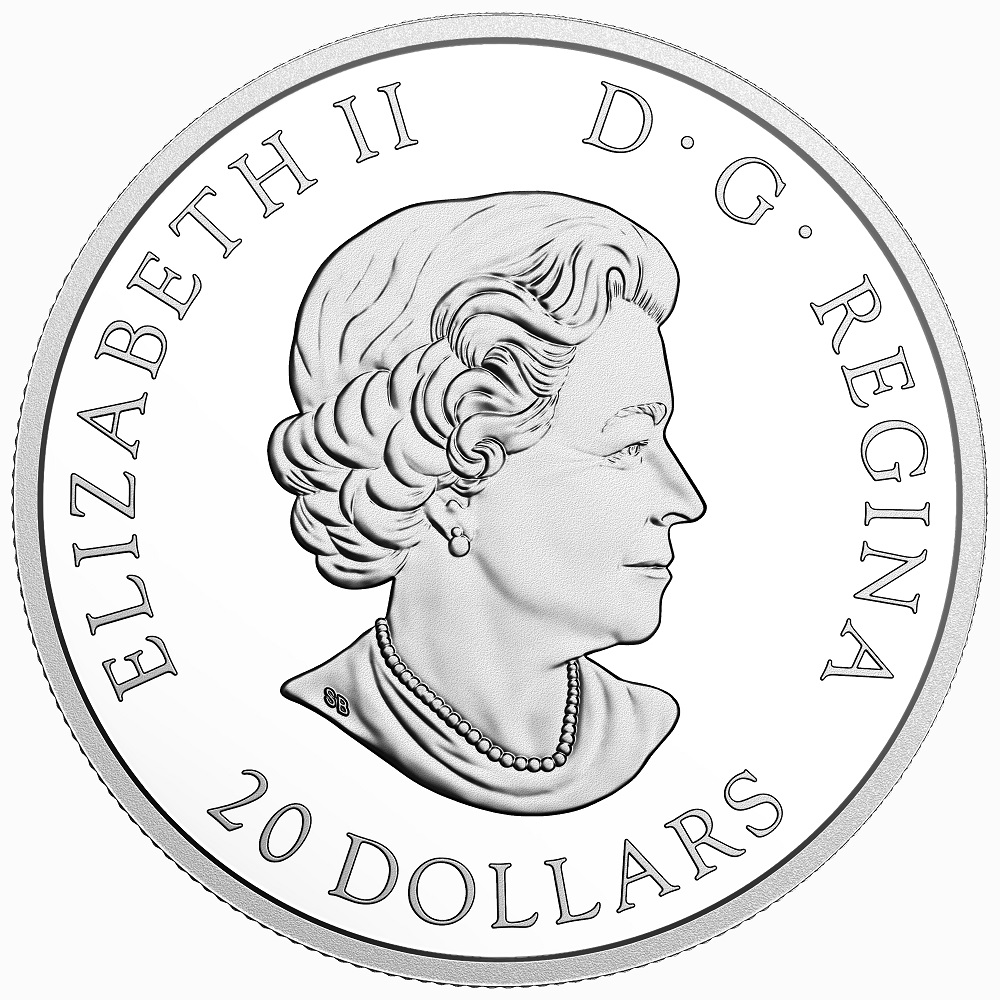 The obverse features the effigy of Her Majesty Queen Elizabeth II designed by Susanna Blunt and has been in use on all Canadian circulation and many commemorative coins since 2003. The coin value of 20 DOLLARS is placed below the Queen’s portrait. 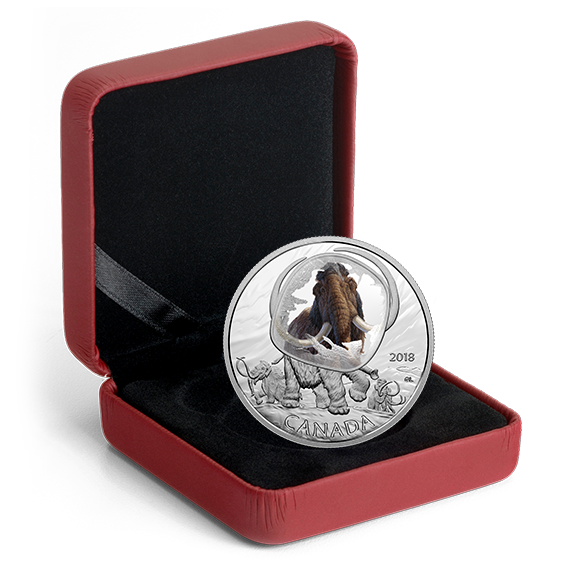 The next coin in the series will be the Scimitar Sabre-Tooth Cat. The coin is encapsulated and housed in a custom Royal Canadian Mint-branded maroon colour presentation case protected by an outer box sleeve and is accompanied by a numbered certificate of authenticity. For additional information on this coin and others available from the Royal Canadian Mint, please visit their website.