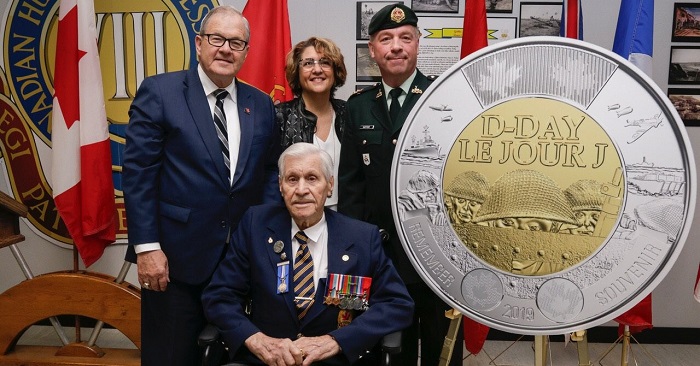 The Royal Canadian Mint has launched (27th May) new commemorative $2 coins which are a salute to the 75th anniversary of the D-Day landings, which was, for all intents and purposes, the beginning of the end of the fighting in Europe during the Second World War. The meticulously planned offensive included Allied forces from the United States, Great Britain, ANZAC, and Canadian forces, as well as soldiers of occupied countries from France, Czechoslovakia, Poland, and Norway. The offensive, which was codenamed “Operation Neptune,” was the most massive seaborne invasion in history. The operation initiated the liberation of German-occupied France (and later Europe) from the Third Reich and laid the foundations of the Allied victory on the Western Front.

After nearly five long years of fighting on the continent and with so many countries putting up admirable resistance to invasion and occupation, Canadian forces had been at the forefront of the fighting in support of Great Britain and other Empire forces. Upon the entry of United States forces in 1942 against the Axis powers of Germany, Italy, and Japan, the belief that the Third Reich could be soundly defeated became more of a reality. The planning for the operation began in 1943 and in the months leading up to the invasion, part of the success depended on the Allies carrying out a substantial military deception. Codenamed “Operation Bodyguard,” the plan included misleading the Germans about the date and location of the main Allied landings.

Canadian forces landed in Normandy, France, and helped establish the Allied foothold with 13 Canadian regiments landing at Juno Beach on the 6th June 1944. The Canadian soldiers that landed at Juno Beach fought valiantly and suffered heavy losses in securing their landing objectives at the end of D-Day. Of the more than 156,000 Allied soldiers who took part in the invasion, there were over 10,000 casualties and 4,414 deaths confirmed. Of the 14,000 Canadian soldiers, there were 1,074 casualties, including 359 killed. The objective was achieved, and a permanent foothold had been gained in France by the Allies, resulting in pushing back German forces considerably on the Western Front. Additionally, the Germans lost ground on the Eastern Front, due to advancing Soviet troops. On the 30th April 1945, the world received the news that Adolph Hitler had committed suicide in his bunker beneath the Reich Chancellery in Berlin, paving the way for an unconditional surrender by the fuhrer’s successor, Grand Admiral Karl Dönitz, on the 7th May 1945. The fighting was over in Europe, and the Allied forces then turned their attention to the ongoing war fought against Imperial Japanese forces. 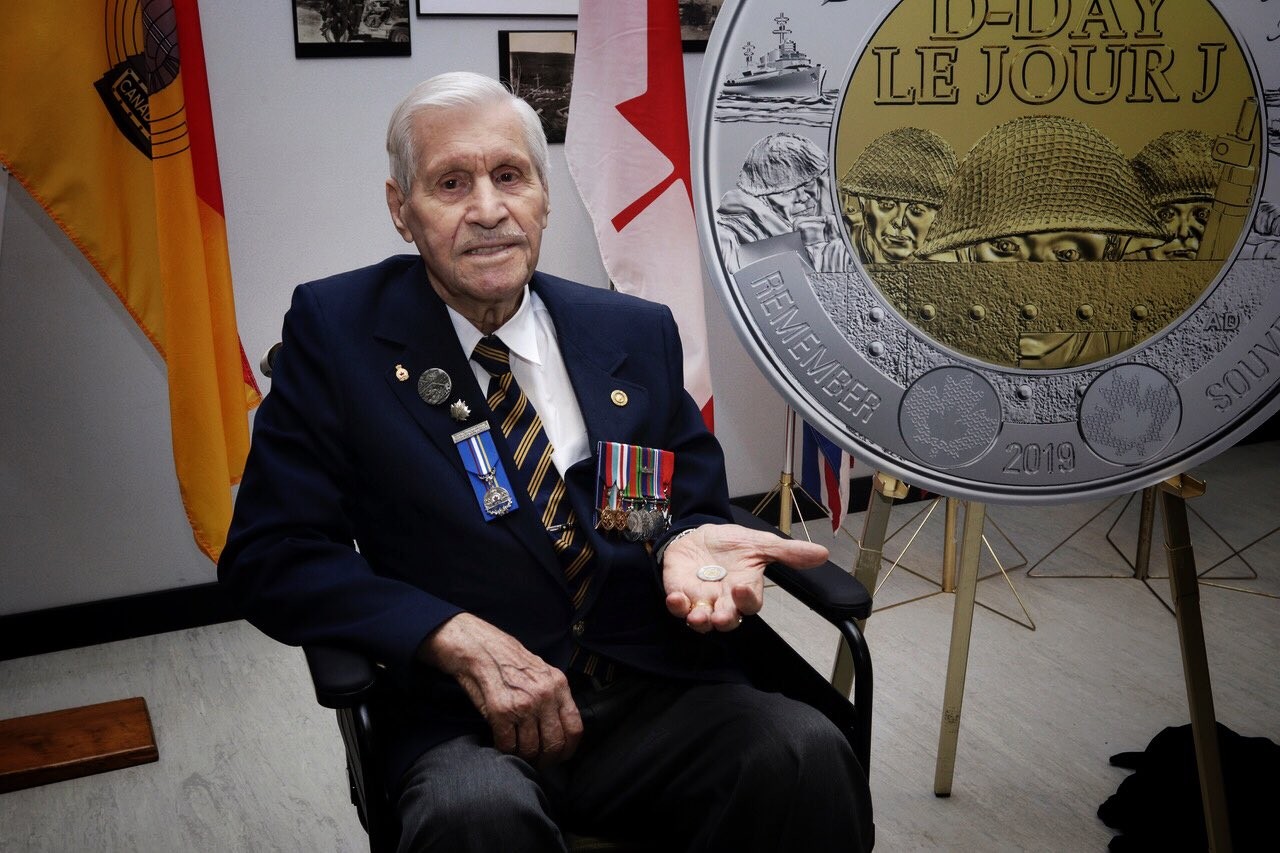 The coins were unveiled at the Moncton Garrison, home to the 37 Brigade of the North Shore Regiment (New Brunswick) whose troops were among the 13 Canadian regiments landing at Juno Beach on 6th June 1944. Taking part in the launch was the Honourable Lawrence MacAulay, Minister of Veterans Affairs and Associate Minister of National Defence, Marie Lemay, president and CEO of the Royal Canadian Mint and North Shore Regiment Commander LCol Rénald Dufour. Also on hand during the event was 99-year-old D-Day veteran Alphonse Vautour, who was presented with the first $2 circulation coin before its official issue. 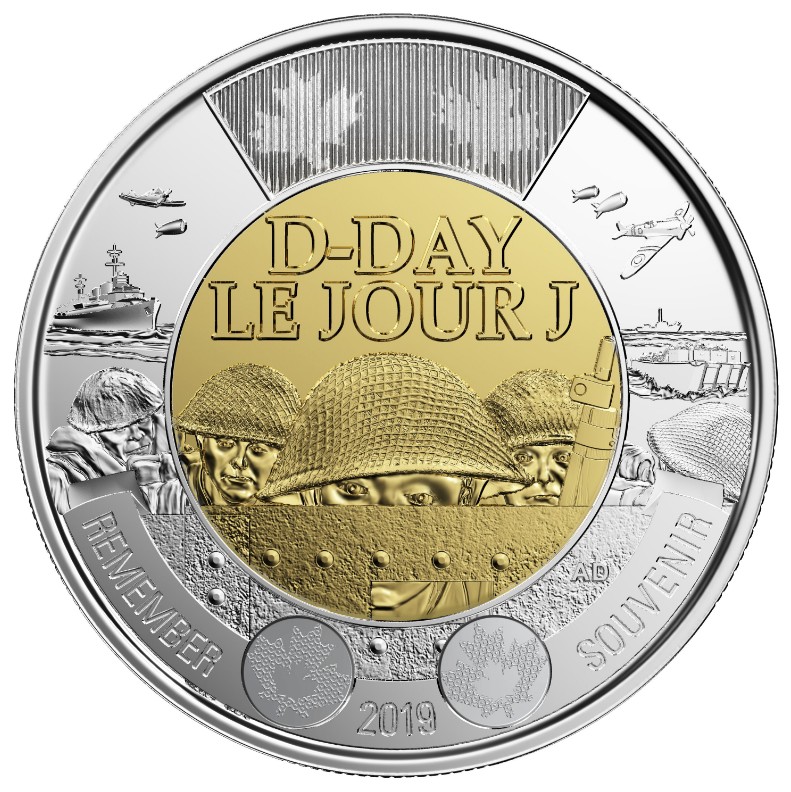 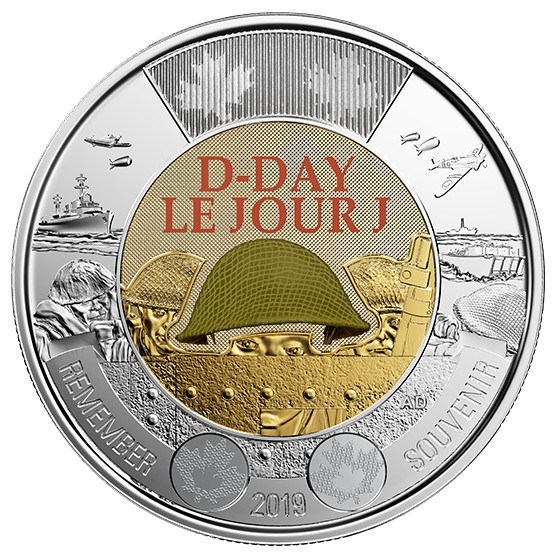 Designed by Canadian artist Alan Daniel, the reverse of the $2 bi-metallic coins conveys the anticipation of Canadian soldiers approaching Juno Beach, Normandy, on 6th June 1944. A compelling perspective at the core of the coin shows three soldiers peering from their landing craft. On the outer ring, engravings of ships and aircraft illustrate the massive air and naval operation which supported the troops taking part in the largest seaborne invasion in military history. D-DAY/LE JOUR J is engraved above the soldiers’ helmets. At the bottom, the words REMEMBER and SOUVENIR appear and are separated by the coin’s 2019 date. 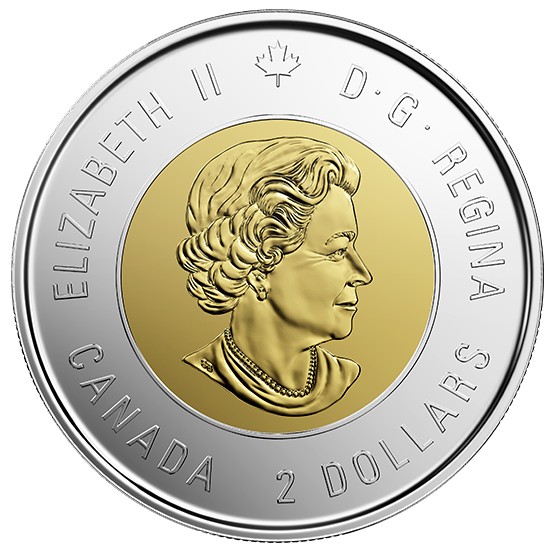 The obverse features the effigy of Her Majesty Queen Elizabeth, designed by Canadian artist Susanna Blunt in 2003. 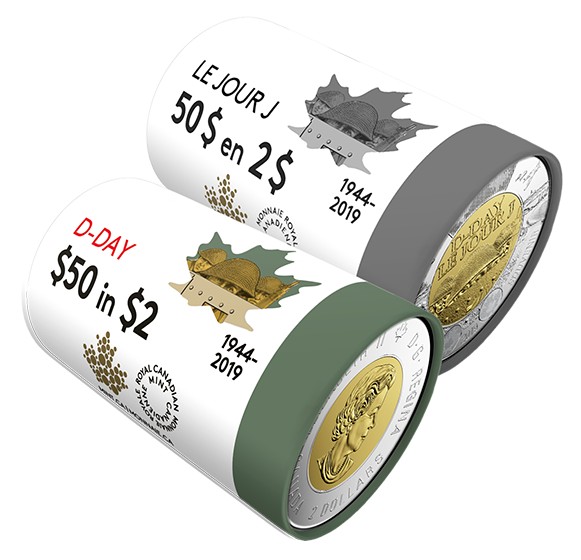 Limited to a mintage of three million coins, of which two million will feature colour, the two-dollar circulation coin commemorating the 75th anniversary of the D-Day landings is now entering general circulation. Canadians should see them gradually appear in their change as bank branches and businesses begin replenishing inventories of $2 coins. Over the coming months, the mint will also hold a number of public coin exchanges at its boutiques in Ottawa and Winnipeg, in addition to other locations around the country. The coins are also being offered in special wrap rolls of 25 two-dollar circulation coins featuring the same artwork found on the reverse of the coins. 15,000 rolls of coloured coins and 5,000 rolls of non-coloured coins are being offered. For additional information about these coins, please visit the website of the Royal Canadian Mint.